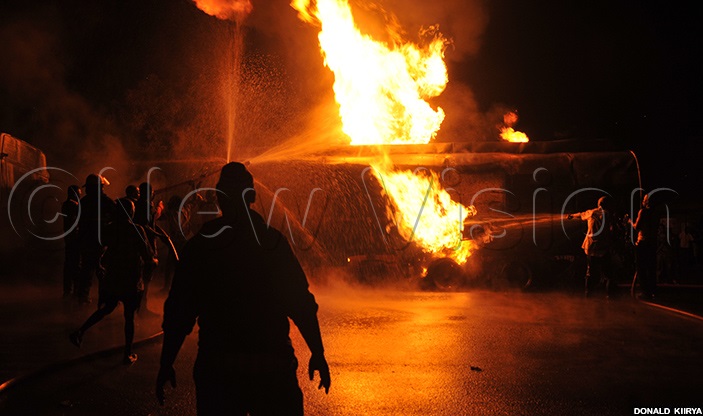 The trailer truck registration number KBY 467W was among other trailer trucks parked near Isaac’s hardware shop along Jinja-Kampala highway.

A stationary fuel tanker went up in flames at Namwezi in Mbiko along the Jinja-Kampala highway after a Local Defense Unit (LDU) officer shot at it as he tried to chase idlers in the wee hours of Tuesday.

The officer was on patrol with his colleagues. By the time of the shooting, he was trying to scare youths who were running away from them after being found gambling (playing cards).

Hassan Muwanga a councillor of Kyabagu zone in Njeru division who was at the scene, narrated that the trailer truck registration number KBY 467W was among other trailer trucks parked near Isaac's hardware shop along Jinja-Kampala highway in Mbiko.

He said the driver of the trailer was sleeping in a nearby lodge.

Another eye witness who preferred anonymity said he heard five gunshots and after a few minutes, from a distance, he saw fire blazing.

"I rushed to the scene and yelled for help until residents gathered at the scene. We started throwing stones and shouting at the top of our voices until the other drivers woke up to rescue their trailers.

He added that many drivers of long-distance trucks who were sleeping in nearby lodge rushed to the scene in towels. 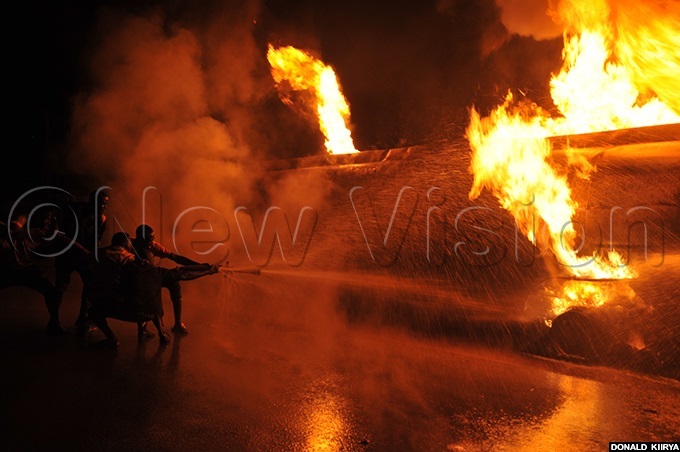 Fred Kabagambe, a councillor of Namuwaya/Kizungu zone in Njeru division said he saw a firefighter truck from Nytil trying to put out the fire and later was joined by a fire brigade from Jinja Police.

"The police fire brigade took long to arrive at the scene prompting the fire to escalate burning another vehicle a Toyota corona registration number UAH 515D and a motorcycle that was parked close to it," Kabagambe said.

He added that the cabin and tires of the fuel tanker were burnt but the tanker which contained over 1000 litres of fuel didn't bust.

According to Hellen Butoto the Ssezibwa region Police spokesperson, Police received two allegations that might have caused the incident. 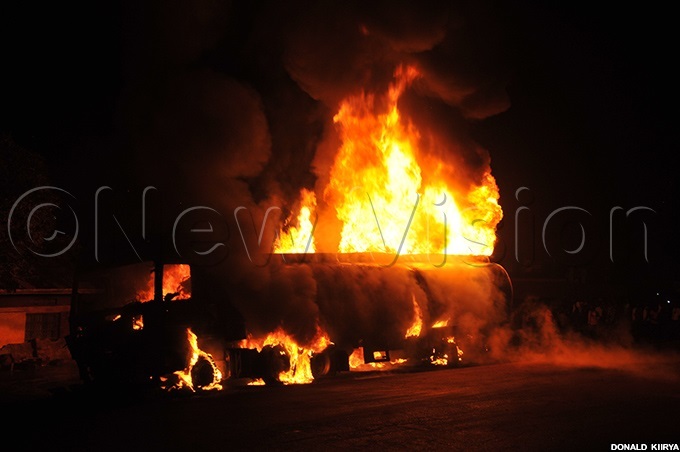 Transport was paralysed for hours in the night. Traffic was blocked to avoid fatalities as a result of extreme fires from the fuel tanker.

Butoto cautioned the public against parking their vehicles with flammable content along the Jinja-Kampala highway to avoid accidents.

On Tuesday morning, fuel was oozing out of the fuel tanker and the fire was completely out. Residents were collecting the fuel into their jerrycans and basins as the LDUs guarded the scene.

The Njeru division Police Commander, Hillary Mukiza, also visited the scene and inspected the fuel tanker but declined to talk to Journalists.

Electricity wires were also seen hanging loose at the scene as others were on the ground after some electric poles fell down.

Traffic Policemen were around controlling vehicles that were passing by the section where the incident happened along the Jinja-Kampala highway.