Notice from African Initiatives for Relief...
Next Story

UGAFODE Microfinance Limited (MDI) has opened a mini-branch in Nakivale Refugee Settlement, Isingiro district. The microfinance deposit-taking institution, which is regulated by the Bank of Uganda, is pioneering financial inclusion for thousands of refugees.

The initiative is aimed at building sustainable livelihoods, resilience and self-reliance among refugees in the settlement and host communities. This follows a successful pilot scheme of financial inclusion for refugees in Kampala. Under the project, refugees continue to access credit, savings and money transfer services.

During the pilot phase, UGAFODE adjusted its policies and procedures, including document requirements, such as identification (Refugee ID issued by the Office of the Prime Minister — refugee department). "Serving refugees fits in well with our mission of transforming lives of the low income, but economically active population.

The refugees are economically active and have financial needs like any other person and deserve utmost attention," Shafi Nambobi, the UGAFODE chief executive officer, said recently. He commended the Office of the Prime Minister — refugee desk for being instrumental in the success of the initiative. He also hailed the United Nations High Commissioner for Refugees and the Swedish International Development Co-operation Agency which through Grameen Credit Agricol supported the project to set up a mini-branch in Nakivale. 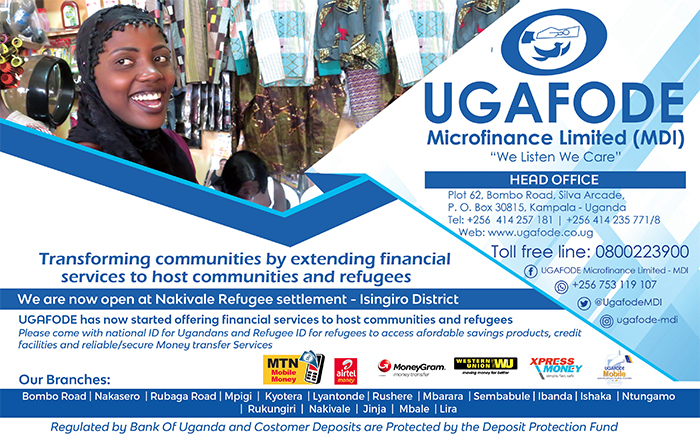 Nakivale settlement hosts over 100,000 refugees from 13 countries. Most of these are engaged in agriculture and trade. "With the Nakivale branch we shall extend financial services to smallholder refugee farmers and host community members, hence improve their household incomes," Nambobi added. According to Nambobi, the institution plans to roll out financial services to refugees in other settlements in the future.

He said results from the pilot testing period have enabled them appreciate the unique cultures and how different nationalities want to be served. He said UGAFODE has a refugee ready team, products and services which are affordable and tailored to suit all customer segments for both refugees and host communities. He said their branches are also conveniently located near their target communities.

According to a cross-section of refugees, UGAFODE Nakivale branch saves them from travelling long distances to access financial services in Mbarara or Isingiro. "With the establishment of this UGAFODE branch in our camp, financial services have been brought to our backyard, we can now be served easily," one of the refugees said. Another refugee said previously due to poor roads, one needed to spare a day just to go to the bank. They pointed out that the branch will help them save on transport costs and time wasted traveling.