The latest death toll announced by the health ministry took to 724 the official number of people to have been killed by the disease since last month.

People queue in line to receive packages for precautions against COVID-19 coronavirus disease provided by the Basij, a militia loyal to Iran's Islamic republic establishment on March 15, 2020.(Photo by STRINGER / AFP)

The latest death toll announced by the health ministry took to 724 the official number of people to have been killed by the disease since last month.

HEALTH  VIRUS
Iran on Sunday urged its citizens to stick to guidelines and stay at home to stop the new coronavirus spreading, as it announced another 113 deaths from the outbreak.
The latest death toll announced by the health ministry took to 724 the official number of people to have been killed by the disease since last month.
People "should cancel all travel and stay at home so that we may see the situation improving in the coming days," ministry spokesman Kianoush Jahanpour said in a televised news conference.
Jahanpour also reported 1,209 new confirmed cases of COVID-19 infections, raising the total number of confirmed infections to 13,938. 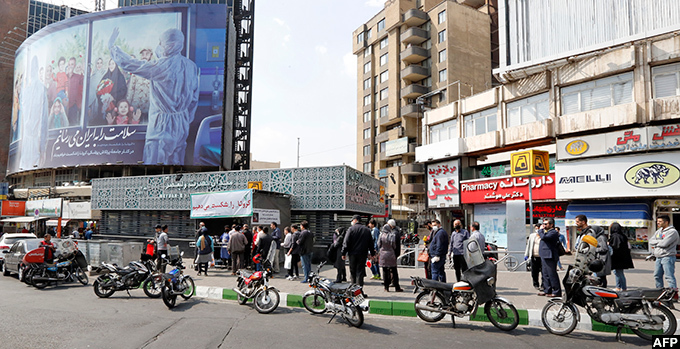 "The good news is that more than 4,590 of the overall confirmed cases have recovered" and the patients have been discharged from hospitals, he added.
Tehran province had the highest number of new infections with 251 fresh cases.
Khorasan Razavi province, home to the holy Shiite city of Mashhad, followed with 143 cases.
"The cases there will probably increase," the official said, calling on everyone to cease from travelling to the northeastern province.
Mashhad's Imam Reza shrine receives many devout Iranians every year, especially around the country's New Year holidays which start on March 20.
The outbreak in Iran is one of the deadliest outside of China, where the disease originated.
Jahanpour called on Iranians to "take the coronavirus seriously" and especially to be mindful of elderly people who are most vulnerable to the infection.
But despite warnings people still crowded public areas, state TV showed.
Between its feel-good programmes such as bloopers and comedy cinema history, it showed a busy bank branch with the manager calling on people to carry out their transactions online. 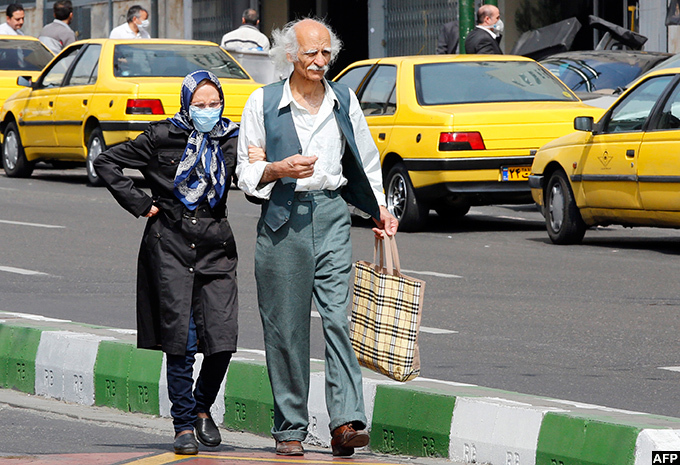 Iran's Basij militia was helping people by handing out sanitary items to the public in Tehran on Sunday.
- 'No quarantine' -
Several politicians and officials, both sitting and former, have been infected with the new coronavirus, and some have died from the illness.
The latest senior official infected, according to local media reports, was Ayatollah Hashem Bahtayi Golpayegani, a member of Iran's assembly of experts which is tasked with appointing and monitoring the Islamic republic's supreme leader.
Iran's President Hassan Rouhani denied rumours authorities were preparing to place cities under quarantine and said provincial officials were not allowed to decide on the issue.
"We have no quarantine and all businesses are free and government services will continue," Rouhani said at a televised conference with business-owners, saying this would apply through the holiday period and beyond.
"Provinces are under no circumstances allowed to decide regarding closures," he added, noting all decisions will be made at the coronavirus headquarters in Tehran.
The authorities also announced on Sunday that the second round of legislative elections, scheduled for 17 April, had been postponed until 11 September.
Business tax, loan paybacks and payment of bills will be delayed until late May to alleviate economic pressure during the outbreak, according to Rouhani.
The government will also give cash handouts to three million impoverished Iranian households with breadwinners working "as peddlers or those with temporary jobs" ranging from 2-6 million rials in four stages.
Another four million households will receive low-rate loans from between 10-20 million rials ($63-$127) with the government subsidising part of its payback.
Iran said on Friday that security forces would clear streets nationwide within 24 hours so all citizens can be checked for coronavirus.
But there were no signs of the operation taking place in Iranian media as on Sunday as officials made no mention of the measure.