Liverpool fans are wondering when, or even if, they will be crowned champions after the coronavirus laid waste to the global sporting calendar.

Liverpool have had a near-flawless Premier League season. (AFP)

Liverpool fans are wondering when, or even if, they will be crowned champions after the coronavirus laid waste to the global sporting calendar.

Liverpool could have been crowned Premier League champions on Monday for the first time in a generation. Instead the stadium will be silent and the streets empty.

Jurgen Klopp's team needed Manchester City to lose to Burnley on Saturday to give them a chance to seal the deal at their local rivals Everton two days later.

Regardless of whether it would have happened at Goodison Park or over the coming weeks, their first top-flight title for 30 years was a mere formality.

But now fans are wondering when, or even if, they will be crowned champions after the coronavirus laid waste to the global sporting calendar.

The message coming from Liverpool is that there are more important issues than football to talk about, even with the club tantalisingly close to glory.

"I've said before that football always seems the most important of the least important things," Klopp said in a statement on Friday.

"Today, football and football matches really aren't important at all.

"If it's a choice between football and the good of the wider society, it's no contest. Really, it isn't." 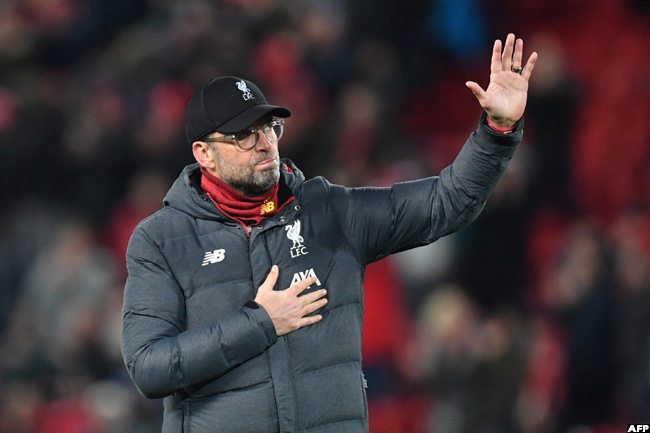 Jurgen Klopp says football can wait amid the coronavirus crisis

Klopp's stance won him the support of World Health Organisation chief Tedros Adhanom Ghebreyesus, who thanked him for his "powerful message".

Liverpool supporters, desperate to reclaim their position at the pinnacle of the English game, agree with their German manager, saying the pandemic overshadows football.

Supporters' union Spirit of Shankly is focusing on the damaging fallout from the COVID-19 virus.

"In talks with @lfc we asked for assurances that non-playing staff will not lose their pay as a consequence of shifts being cancelled," it said in a statement.

"We also need to keep in mind those most vulnerable. Cancelling football games means (foodbanks) will be hit hard."

Liverpool have stumbled in recent weeks, knocked out of the Champions League by Atletico Madrid and dumped out of the FA Cup by Chelsea.

But they have been peerless in the Premier League, leaving their rivals in their wake to race 25 points clear of defending champions Manchester City.

With Alisson Becker in goal, Virgil van Dijk marshalling the defence and their devastating front three of Roberto Firmino, Mohamed Salah and Sadio Mane, Klopp's men have been irresistible. 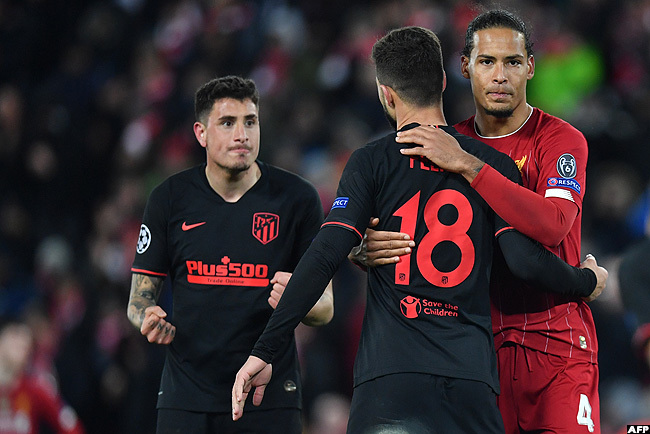 Liverpool were knocked out of the Champions League by Atletico Madrid

Paul Hayward, writing in the Daily Telegraph, said Liverpool should be crowned champions for the 19th time even if no more games are played.

"If a season ends too soon, its natural winning line is the point it reached before the halt was called: emphatically so, 29 games into a 38-match campaign, which is a respectable distance," he wrote.

"'Voiding' the 2019/20 football season would be nonsense," he added. "Handing over the trophy at any point where clubs were forced to give up would feel morally correct."

Brighton and Hove Albion chief executive Paul Barber said if the season were to be "frozen" it would be unjust on Liverpool.

"Everybody in the game appreciates what a fantastic season they've had and what a wonderful team they are," he told the BBC.

"But equally it would be unjust for teams to be relegated when there are still eight, nine, ten games to play of the Premier League."

But West Ham vice-chairman Karren Brady said if the fixtures could not be completed, the only fair solution would be to declare the season "null and void".

Writing in the Sun, Brady, whose club are just two places above the relegation zone, said: "Who knows who would have gone down or come up if the games have not actually been played in full?

"A huge blow to Liverpool, who might be robbed of their first title in 30 years."

Nobody knows when football will return but, when it finally does, many in the game hope Liverpool are given the chance to complete their long journey back to the top.

Mbabazi is a spoiler for the opposition - MP Ogwal

We must resist camp politics