NRM says party has not discussed election ...
Next Story

The suspects appearing in court via video-conferencing. Photo by Douglas Mubiru

Seven men have been committed to High Court for trial on charges of murder and kidnap of social worker Maria Nagirinya and her driver Ronald Kitayimbwa.
The committed, who appeared via video conferencing, are Coporiyamu Kasolo alias Arsenal, Johnson Lubega alias Etoo Rasta Manonmano, Nasif Kalyango alias Muyonge, and Hassan Kisekka.
Others include included Sharif Mpanaga, Sadat Kateregga, and Raymond Okori.
Nateete Grade One Magistrate Joel Wegoye committed the suspects on Friday after the prosecution led by Immaculate Nambaju presented committal papers indicting the latter.
In her submission, Nambaju said that the Director of Public Prosecutions (DPP) will rely on the charge and caution statements in which the accused confessed to having killed Nagirinya and Kitayimbwa.
"The DPP also intends to rely on the closed-circuit television (CCTV) footage showing one of the suspects as they followed Nagirinya's vehicle from Lungujja while on a motorcycle," Nambaju said. 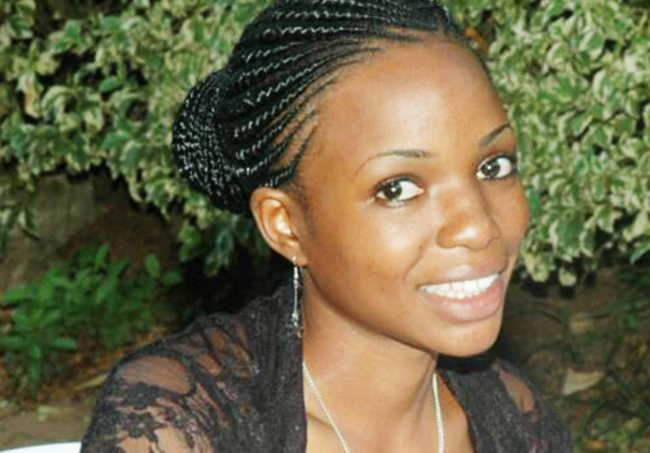 The late Maria Nagirinya
The prosecution will also rely on the post mortem reports which indicated neurogenic shock, as the cause of death to the deceased, rising from blunt head trauma.
Upon prosecution submission of committal papers, the trial Magistrate committed the accused to High Court.
"It is in that court that you will all take plea and defend yourself as well," Wegoye said.
According to the prosecution, on August 28, 2019, at Nabisasiro Zone, Rubaga division in Kampala and Mukono districts, the accused and others still at large with intent to murder, kidnapped Nagirinya and Kitayimbwa.
It is also purported that the accused used violence to rob Nagirinya of her motor vehicle, mobile phone and sh260,000.
That they also robbed Kitayimbwa's mobile phone and sh240,000 cash, all acts against the law.