Landing sites such as Butiaba, Kalolo, Kabowa, Walukuba, Sonsio and Chigolyech have remained open without screening points due to limited resources.

Travellers from DR Congo being screened for both Ebola and COVID-19 at Wanseko Landing Site. Photo by Harriet Kugonza

Landing sites such as Butiaba, Kalolo, Kabowa, Walukuba, Sonsio and Chigolyech have remained open without screening points due to limited resources.

BULIISA - Health teams in Buliisa district have intensified integrated screening for Ebola and coronavirus on the shores of Lake Albert in a bid to curtail the possible spread of the virus into the country through neighbouring DR Congo.
This follows a report of a confirmed coronavirus (COVID-19) case in DR Congo's capital Kinshasa.
According to Denis Muhangi, a health worker at Wanseko screening point, the exercise resumed on Wednesday at the ferry landing site. About 822 passengers who came in using the ferry were screened on the first day.
Among the screened passenger 44 revealed that they were travelling from DR Congo through Panyimoor to Wanseko.
Muhangi explained that most Congolese tend to hide their identity and pretend to be coming from Porongo in Gulu district because they both speak Alur and share names.
Muhangi added that although there is screening at Wanseko, many more landing sites are open and boats ferry in passengers from DR Congo without being screened.
Muhangi, however, revealed that they do not have enough information about COVID-19 but they focus mostly on high temperature, flu, cough and travel history of any suspect. 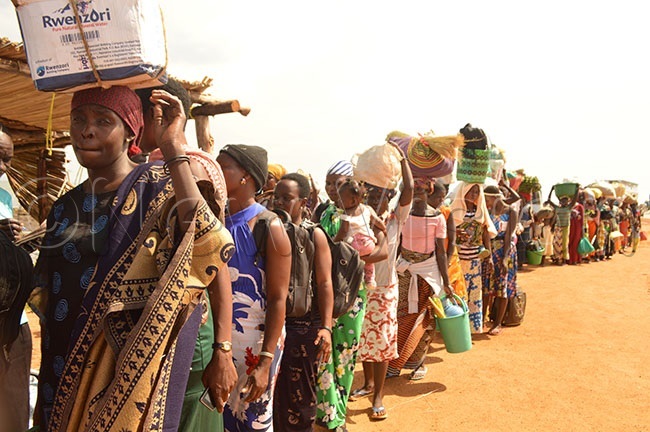 Travellers waiting to be screened in Buliisa. Photo by Harriet Kugonza

Need for equipment
He narrated that they are working in a difficult situation because the temporary shelter that was constructed last year is depleted while other health workers stand in the open sunshine as they screen people.
They also do not have protective gear such as masks, gloves, disinfectants, sanitisers, and seats. Even the infrared thermometers they are using to measure temperature are worn out.
He also complained of the delayed arrears for six months where they have been screening for Ebola but they are not yet paid.
However, the district health officer, Dr.Nelson Naisye, confirmed that they were waiting for the finance ministry to pass a supplementary budget to allow them to withdraw sh397m in order to clear all the arrears.
Naisye explained that they were enforcing compulsory handwashing at the screening point although most landing sites such as Butiaba, Kalolo, Kabowa, Walukuba, Sonsio and Chigolyech have remained open without screening points because of limited resources.
He said the district task force would hold a meeting next week to prepare training sessions for district and sub-county leaders on sensitising the masses about COVID-19.
He, however, asked the residents to remain calm as the Government was handling the situation.
The resident district commissioner, Amos Asiimwe, said many crossing sites remain without screening points along the Lake Albert area.
The health ministry senior communications officer, Emma Ainebyoona, said the gears were being distributed by their logistics teams.
"We have the stocks required such as personal protective gears," Ainebyoona said.

Fishermen stranded as their homes in Buliisa are flooded

Fishermen stranded as their homes in Buliisa are flooded...