The game was played without fans in line with the guidance of the Austrian government.

The game was played without fans in line with the guidance of the Austrian government.

EUROPA LEAGUE ROUND OF 16


Manchester United won 5-0 at LASK Linz behind closed doors in the first leg of their Europa League last-16 tie, in a competition thrown into chaos as a result of the coronavirus pandemic.

Odion Ighalo slammed home the opener via the underside of the bar from 20 yards just before the half-hour, and Daniel James added a second with a sharp run and finish just before the hour mark.

Juan Mata bagged a third eight minutes from the end and Mason Greenwood and Andreas Pereira struck in injury time, as United extended their unbeaten run to 11 matches, with nine clean sheets in that time.

The game was played without fans in line with the guidance of the Austrian government -- one of four matches to be held behind closed doors on Thursday. 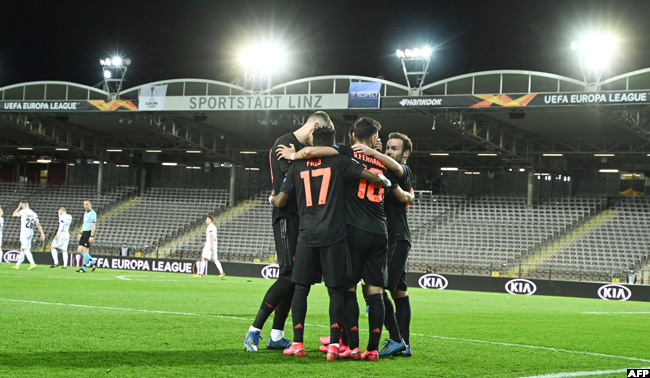 UEFA on Wednesday confirmed that the first legs between Inter Milan and Getafe in Italy, and between Sevilla and Roma in Spain, would not go ahead as planned.

The announcement came after Spanish authorities suspended flights until March 25 to the country from Italy, which has been the worst hit European nation by the spread of the virus.

With the second legs due to be played next week, it is unclear how the ties will be resolved.

Istanbul Basaksehir won 1-0 at home to FC Copenhagen in Turkey courtesy of a late Edin Visca penalty, in one of just two first-leg matches allowed to take place before a crowd. Rangers against Bayer Leverkusen at Ibrox will also be open to fans. 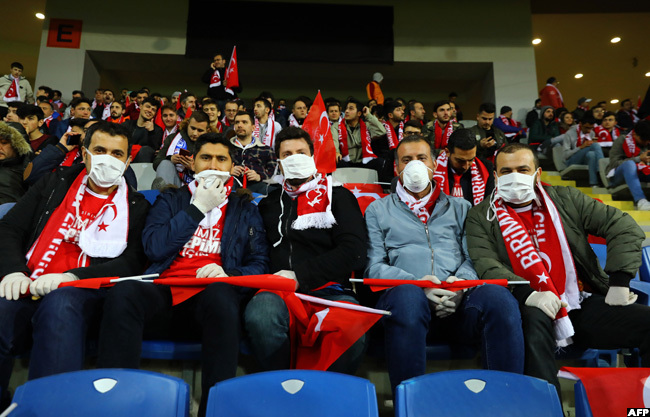 Basel secured a surprise 3-0 victory over Eintracht Frankfurt with Samuele Campo, Kevin Bua and Fabian Frei all on target for the visitors. Germany's financial capital will also host next week's return leg, due to coronavirus-related restrictions imposed by Swiss authorities.

Wolfsburg's game against Shakhtar Donetsk will be played behind closed doors, as will the match between Olympiakos and Wolverhampton Wanderers in Greece.

On Tuesday it was announced that Olympiakos owner Vangelis Marinakis -- also the owner of English club Nottingham Forest -- had tested positive for coronavirus. He said he was taking "all necessary measures" and "feeling well".

Wolves asked that the match be postponed, but said that UEFA had rejected that request.