How prepared is Uganda to handle corona vi...
Next Story

The number of new confirmed cases daily in China has been maintained under 50 for 3 consecutive days.

President Museveni held a sign in solidarity with the Chinese people saying “Wuhan Jiayou” (Wuhan, be strong!) with Zhuqiang

The number of new confirmed cases daily in China has been maintained under 50 for 3 consecutive days.

I. COVID-19, a previously unknown coronavirus that was first discovered in Central China's Wuhan City at the turn of year 2019 and 2020 and once spread rapidly in China, is now effectively prevented and controlled, in China.

Latest figures (not including Hong Kong Special Administrative Region, Macao Special Administrative Region and Taiwan Province in this case) released on March 10 show that, up to 24:00 hours the previous day, though the total number of confirmed cases still stood high at 80754, there were only 19 new cases on March 9, an incredibly sharp decrease of 99.8% from the peak of single-day addition of 14840 new cases on February 12.

The above shows that the Chinese tenacious fight against the virus has now resulted in a growing positive momentum across the country, a full demonstration of the systematic advantage of China in her socialism with Chinese characteristics, in her capability to put up all the might of a country to face up to any serious emergent challenge and to take up any major task of the country.

In face of such a serious crisis and major test, since the very beginning of the outbreak of the epidemic, H.E. Xi Jinping, President of the People's Republic of China and the General Secretary of the Communist Party of China Central Committee, has been standing in the forefront of the war, attaching vital importance to the issue.

On March 10, President Xi Jinping visited Wuhan for COVID-19 prevention and control inspection, going straight to Huoshenshan Hospital, one of the infectious hospitals specially built for fighting COVID-19, expressing his regards to the front-line workers and community residents.

He has also convened and chaired ten top-level meetings and conferences on epidemic prevention and control within the course of 40 days between January 25 to March 6, the first one right on the first day of Spring Festival, the most important festival and holiday in China.

In all these meetings, some with a direct audience of up to 170,000 (via video conferencing system), President Xi Jinping has been exerting excellent leadership by making timely commands and vital and swift deployment, strengthening the centralized, unified leadership of the Party, demanding relevant authorities at all levels across the country to put people's lives and health as the top priority to adopt effective measures to curb the spread of the virus. In so doing, the entire Chinese people have been rallied behind him in the severe battle against the virus.

Of course, China did not stop at that. As an important member of the international community and the global village and guided by the vision of building a community with a shared future for mankind, China has been committed to international and regional cooperation on the epidemic response, including that with the Ugandan government.

China maintains regular communication with the World Health Organization and relevant countries, keeping the epidemic situation open and transparent, sharing the genetic sequence of the virus in a timely manner with WHO and other countries, updating the latest information on the development of the virus control in the country, to name just a few.

Likewise, the international community has been providing valuable moral and material support to China. Up to now, more than 170 heads of state and 40 heads of international organizations have expressed there solidarity with China, H.E. President Yoweri Kaguta Museveni included. WHO Director-General Dr. Tedros Adhanom Ghebreyesus noted that China is "setting a new standard for outbreak response". Indeed, China has done her best to help secure time and to accumulate experience for the entire world, in our joint fight against COVID-19. 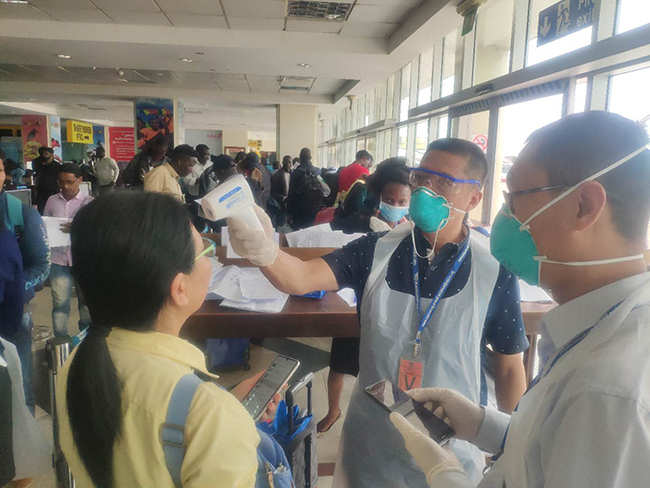 Upon the request from the Ugandan Ministry of Health, volunteers from local Chinese communities took turns to assist Uganda health officials at Entebbe International Airport in helping with the screening, quarantine and surveillance efforts of incoming international travelers.

II. Virus knows no borders, and needless to say, COVID-19 is the common enemy of us all.

China believes that all members of the international community should join hands in the fight against this common enemy of human beings, COVID-19. On her part, China has been following her vision of a community with a shared future for mankind, lived up to her responsibility as a major country, and made substantial contributions to global public health, protecting not only her own people but also the rest of the world.

Despite her own heavy tasks on epidemic control, China has been provided supplies and technical support within it's capacity to countries that are severely affected by COVID-19 and those with vulnerable medical systems, such as Iran, Republic of Korea, Japan, Italy and African countries including Uganda, as well as to WHO.

On March 7, China made a contribution of 20 million US dollars to the WHO in support of its global efforts in combating the COVID-19 epidemic and helping developing countries improve their response capacities and strengthen public health systems.

III. In a short term point of view, the COVID-19 epidemic does have some negative effects on the Chinese economy, a challenge China is working hard to overcome while focusing on the prevention and control of the virus, a task which is being championed by President Xi Jinping.

Financial, administrative and other measures have been taken rapidly to stimulate economic development, which is starting to bear fruits. By 6 March, except for Hubei Province, over 90% of the enterprises above designated size in China have resumed production. In major industrial provinces such as Zhejiang, Guangdong, Shandong, and Jiangsu, such a figure has surpassed 95%.

The production resumption rate for small and medium-sized enterprises has also steadily improved to 52%. With the further containment of the virus, the restoration of more and more productive forces, the China economy will resume its growth and development, and the goals and targets for economic and social development previously set for the year 2020 will be achieved.

China is committed to working with the rest of the world for common development and prosperity, Africa and particularly Uganda included. We will continue to implement the outcomes reached during the Beijing Summit of the Forum on China-Africa Cooperation held in September 2018 and cooperation and projects under the framework Belt and Road Initiative.

IV. As the saying goes, a friend in need is a friend indeed. China expresses her high appreciation for the full understanding and strong political confidence, trust, support and solidarity from our Ugandan friends, including H.E. President Yoweri Kaguta Museveni and Rt. Hon. Rukahana Rugunda, in universities and schools, think tanks, media houses, or from the streets, both offline and online.

Upon the request from the Ugandan Ministry of Health and with coordination from my Embassy, scores of volunteers from local Chinese communities also took turns to assist Uganda health officials at Entebbe International Airport in helping with the screening, quarantine and surveillance efforts of incoming international travelers, reporting any irregularities to the Ugandan authorities.

As a comprehensive cooperative partner, China will stand with Uganda as always, sparing no efforts in joining the fight against the virus and in realizing our dream of common development and prosperity, thus continuously enriching our bilateral relations.