Judge orders Ronaldinho to remain in prison
Next Story


Atletico Madrid ended Liverpool's defence of the Champions League on Wednesday as Marcos Llorente's double and Alvaro Morata's late strike stunned Anfield with a 3-2 win after extra time to progress 4-2 on aggregate. 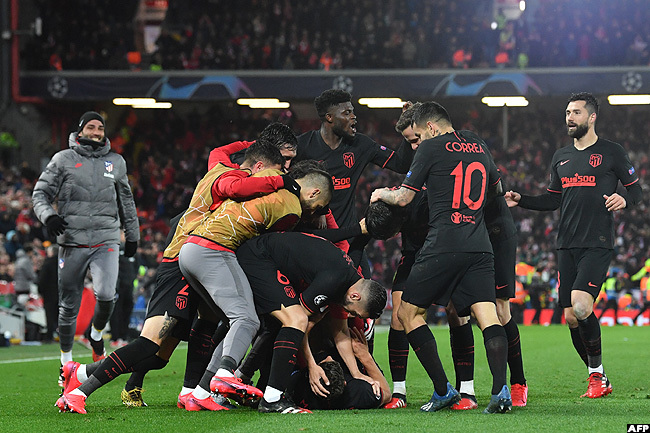 The holders looked to have ended Atletico's dogged resistence when Roberto Firmino put them ahead in the tie after Georginio Wijnaldum's first-half header forced the game into an extra 30 minutes.

However, Liverpool were made to rue a host of missed chances to kill the tie off in 90 minutes as Llorente twice curled home from outside the box before Morata twisted the knife by breaking away to score in added time of extra time. 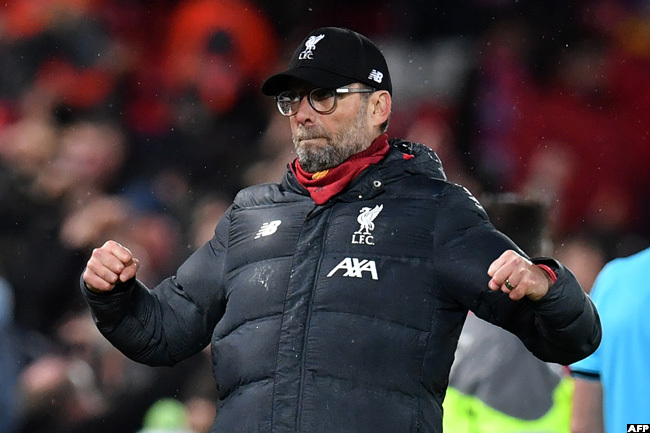 However, it remains to be seen if and when the last eight will even be able to take place due to the chaos caused across the continent by the new coronavirus.

A packed Anfield played its part in trying to roar Liverpool onto another famous Champions League conquest as, unlike in numerous countries across Europe, no restrictions have so far been put on supporters attending games in the United Kingdom.

But it was the nearly 3,000 travelling fans in attendance, despite the fact games in Spain will be played behind closed doors for the next two weeks, that celebrated a stoic rearguard display from their side. 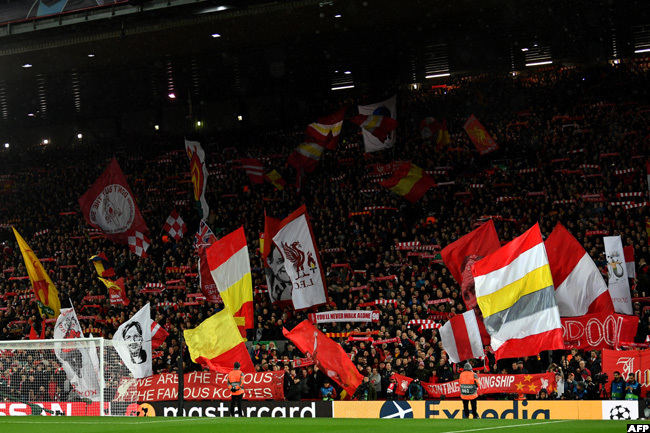 Anfied was alive and bubbly

The European champions did not manage a single shot on target in a 1-0 defeat in Madrid three weeks ago, but Jan Oblak was quickly put to work.

Wijnaldum's flicked header offered a warning for Atletico of what was to come before Oblak parried Alex Oxlade-Chamberlain's driven effort.

Just as the Spaniards thought the job was half done with no damage done, Wijnaldum's powerful downward header left Oblak with no chance two minutes before the break. 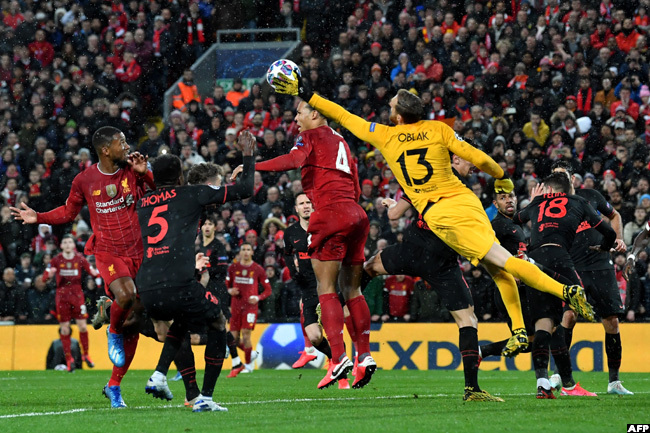 Jan Oblak was brilliant in the Atletico Madrid goal

The goal did not change Atletico's approach as they played a risky game and relied on Oblak to keep them in the game.

The Slovenian saved from Mohamed Salah, Oxlade-Chamberlain and Firmino as Liverpool missed a number of chances that ultimately came back to cost them.

Andy Robertson came closest to the knockout blow with a close-range header that came back off the bar before he, Mane and Salah all fired over.

Atletico thought they had stolen the tie with the last touch of the 90 minutes when Saul Niguez headed home a free-kick, but the Spanish international was flagged offside to send the tie to an extra 30 minutes. 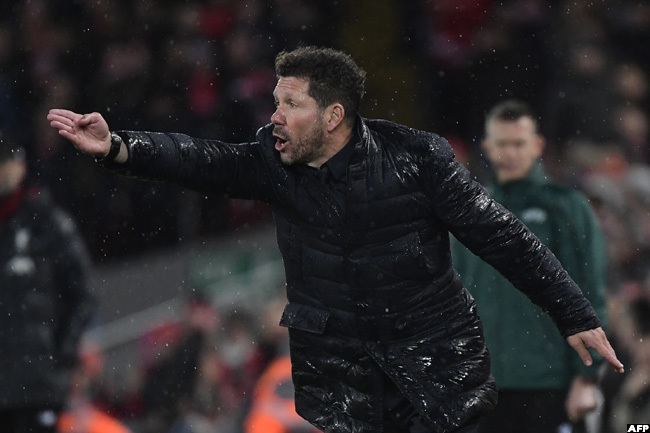 Diego Simeone guided his side to the quarters

Despite Liverpool being on the brink of a first Premier League title in 30 years, their number nine Firmino had not scored at home all season until four minutes into extra-time.

The Brazilian's header from Wijnaldum's cross came back off the post and perfectly back into his path to slot home with Oblak grounded. 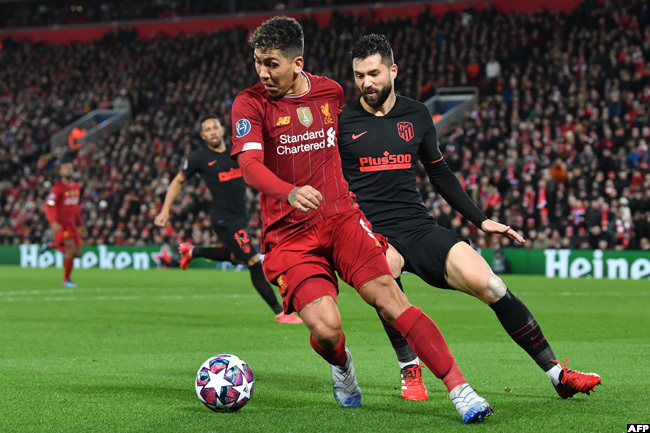 However, no sooner had Liverpool gone in front for the first time in the tie than Atletico hit back with a sucker-punch.

The visitors had barely tested stand-in Liverpool goalkeeper Adrian, but the loss of Alisson Becker to a hip injury eventually proved Liverpool's downfall.

Adrian fired a simple clearance straight to Joao Felix, who fed Llorente and he found the bottom corner.

Llorente had joined Atletico from bitter rivals Real Madrid in a controversial move in June. 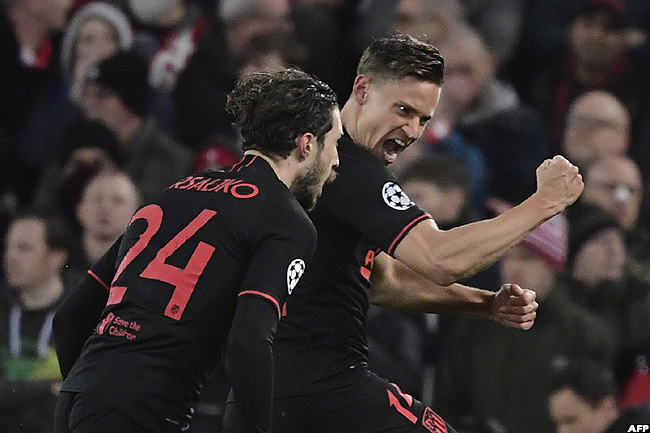 But the man whose father and great uncle, Francisco Gento, also played for Real, made himself a Rojiblanco hero with a second that secured Atletico's place in the last eight with another precise low finish in added time at the end of the first half of extra time.

Another former Real player Morata then sealed a famous win as Liverpool were caught on the counter-attack to lose at home in the Champions League for the first time since October 2014.


Here is how New Vision covered the game on social media:

😉Hello everyone👋🏽 Anfield is set. Tonight, we have been prescribed a dose of European football. Jurgen Klopp's side are hosting Diego Simeone's men, with the Spanish side leading 1-0 from the first leg. | #VisionSports

Motorola plans to source from Africa

Will US war be fatal for Africa?