Religious leaders vow to fight and end tee...
Next Story

With tears rolling down her cheeks, Norah narrates how her employer’s son pushed her from the fourth floor of their apartment to the ground. As a result, she broke her back and legs.

With tears rolling down her cheeks, Norah narrates how her employer’s son pushed her from the fourth floor of their apartment to the ground. As a result, she broke her back and legs.

Like any young mother, 30-year-old Norah Nakalema needed a good job to enable her to look after her children.

She contacted an employment agency, which sent her to Jordan, where she got a job as a housemaid in 2018.

During the first five months of work, Nakalema's employer's son started harassing her after she rejected his sexual advances. Things worsening until they culminated in a near-fatal incident. 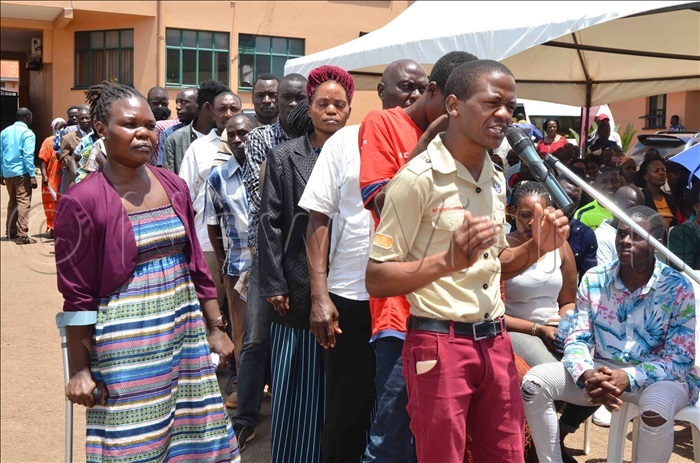 With tears rolling down her cheeks, Norah narrates how her employer's son pushed her from the fourth floor of their apartment to the ground. As a result, she broke her back and legs.

Although she was lucky to be brought back to Uganda by the Red Cross, Nakalema is living a miserable life.

"The company that took me to Jordan has been giving me sh300,000 upkeep every month but as I talk to you, they have stopped. They recently told me it is not their responsibility, but the responsibility of the Government. I do not know what I am going to do. I have to pay rent and foot medical bills. I also have two children to look after. I need help," she said. 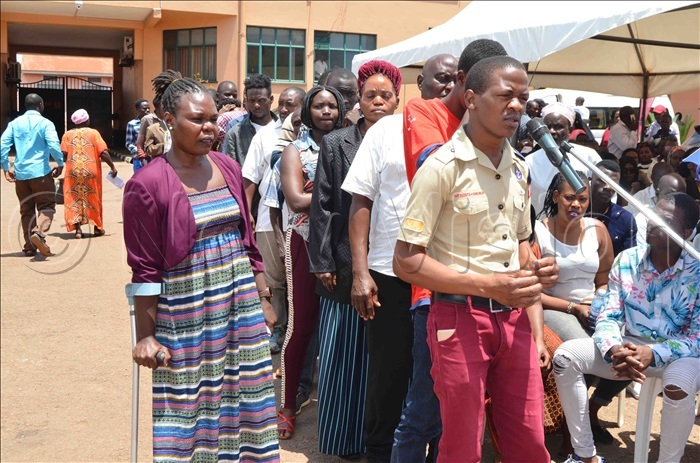 The story of Alice Keatisha is equally disturbing. The 43-year-old got work in Saudi Arabia in 2016. Unfortunately, for a reason she did not know, her workmate pushed her from the fifth floor of the building they were living into the ground. Her backbone was shattered. She says the doctors put about 34 metal screws in her back and 14 in her legs to make her walk again.

"I feel a lot of pain. I sleep in a single room with my seven children. The Catholic Missionaries of the Poor help me with the children's school fees but still, I have to feed them," she said. 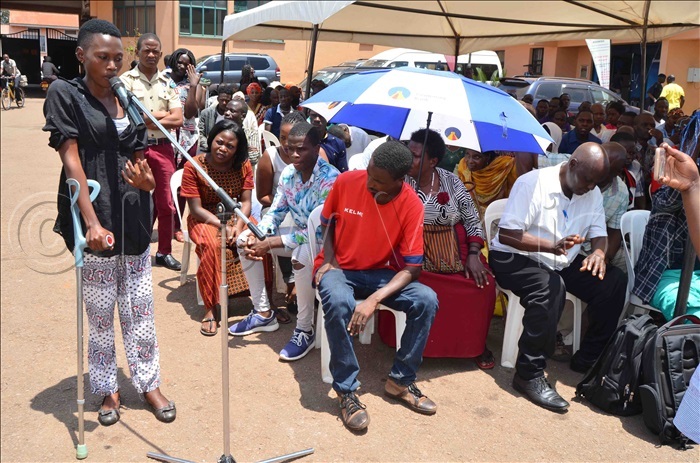 These were among the disturbing stories that various victims of labour injustices poured out during Omudaala, a live talk show, which was aired live on Bukedde Radio and Bukedde TV on Saturday. The programme was organised by Vision Group, in partnership with the Democratic Governance Facility (DGF), an international organisation that promotes justice and human rights.

The talkshow attracted hundreds of aggrieved labour seekers and labour injustice victims, who started flocking to the head office of Vision Group as early as 7:00 am.

Further to projecting the slave-like treatment that many Ugandan labour migrants are subjected to in some Middle East countries, the programme also revealed many labour irregularities that have dehumanised Ugandans in their own country.

Vincent Lwamunono, a resident of Kapeeka in Nakaseke district, narrated a sad story of how he lost his foot, which was smashed by a borehole drilling machine, but the Chinese company he was working for sidelined him. "They were reluctant to act when I asked them to help me foot the medical bill. When they accepted, the money they gave me was insufficient. When they learnt that I had taken the matter to the authorities, one of them laughed at me, saying there was no way I, a poor individual with a disability, could prevail over a rich company.

"As of now, I have sold all my property apart from my house. My wife, Joyce, proposed that we both go back to our parents. But I found her proposal very painful. I love her, I can't imagine a life without her. But I also feel bad to see my two children living in abject misery.

"I used to provide for them everything before I got involved in the accident. Today, I cannot even afford sugar. If they feel like taking tea, they go to my neighbours. Every day, I weep because of my pathetic situation. I do not even have tears anymore. I have thus decided to sell my house without my wife's knowledge. I will then give her the money to start a new life and then commit suicide." During the programme, the victims interacted with and discussed their problems with officials from the labour ministry and labour rights organisations such as Overseas Workers' Voice, Migrant Workers' Voice, Platform for Labour Action, Uganda Association of External Recruitment Agencies, Labour Education Services and Safe Labour Migration. A few employment agencies such as Rokas Recruitment Services and Horeb Services Uganda also sent representatives.

There was drama when one of the complainants engaged a representative of Horeb Services Uganda boss, Ezra Mugisha, in a heated verbal exchange, accusing the company of delaying the process of their recruitment.

Mugisha defended the company, saying the delay was because of the long process of securing certain documents from the Government.

He said his company could not smuggle out a person before they are cleared by the Government. The officials from the labour ministry, Hillary Talemwa and Ismael Kalanda, were also intermittently booed by people who accused the ministry of ignoring them and siding with the errant companies.

Workers' MP Charles Bakkabulindi promised to engage all the stakeholders in a constructive dialogue in order to find a solution to the labour injustices.

Nambooze, Bakaluba have always been at war