The Slovenia international became the first player to score four times away from home in a Champions League knockout match.

The Slovenia international became the first player to score four times away from home in a Champions League knockout match.


Atalanta's fairytale Champions League run continued inside an empty stadium on Tuesday as Josip Ilicic scored four times in a 4-3 win over Valencia that sent his team into the quarter-finals 8-4 on aggregate.

A frantic contest inside an echoing Mestalla stadium was the first of several in the competition to be played behind closed doors due to the coronavirus, with 55,000 vacant seats creating a surreal atmosphere that was never likely to deliver a momentous Valencia comeback.

They had been tasked with overturning a 4-1 defeat from the opening game in Italy and any hopes were all-but dashed inside 90 seconds when Mouctar Diakhaby conceded the first of two penalties, each converted by Ilicic.

In between, Kevin Gameiro had levelled for Valencia and then scored again shortly after half-time before Ferran Torres lobbed in to leave the hosts needing three in just over 20 minutes. 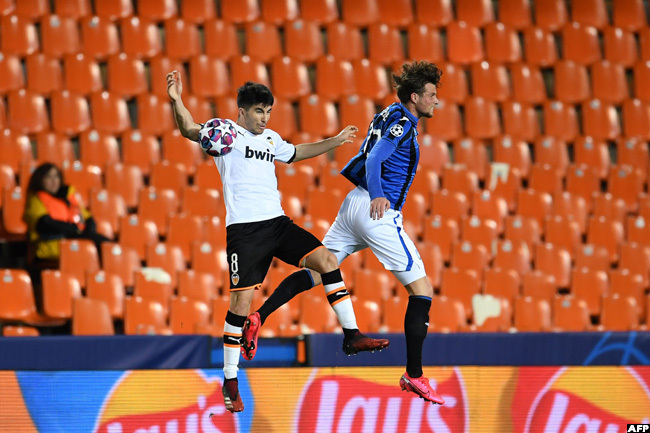 The game was played inside an empty Mestalla Stadium

Yet any chance of a revival was quickly snuffed out as Ilicic completed his hat-trick and added a fourth to ensure Atalanta ended a strange evening with their names in the draw on March 20.

The Slovenia international also became the first player to score four times away from home in a Champions League knockout match.

Atalanta's progress remains the greatest surprise of this year's tournament, in which they lost all three of their opening group games and are featuring for the first time in the club's 113-year history.

"After a difficult start to this competition, we got the hang of it," said coach Gian Piero Gasperini afterwards.

All the more the shame then that their advance on the back of two brilliant victories over Valencia was overshadowed by the sight of a Champions League knock-out tie being played with only a handful of stadium staff in the stands. 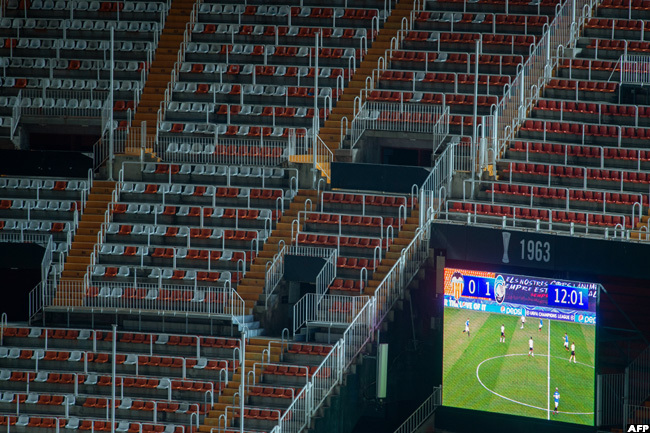 The return tie was played behind closed doors

The shouts of the players were audible throughout while in the first half Valencia seemingly projected crowd noise through a sound system, although it was later turned off when hopes of a comeback had disappeared.

Valencia's supporters had gathered outside the stadium before kick-off to welcome the team bus but none were allowed inside. Atalanta are based in Bergamo in northern Italy, one of the worst-hit regions in a country that has had 631 people killed by the virus so far.

After the final whistle, the players held up a shirt to a television camera that had the message, "Bergamo, this is for you!" written across the front.

"We are very happy with how we have represented a region that suffers so much," said Gasperini.

Spain announced on Monday that all schools in the Madrid area will close on Wednesday while La Liga had confirmed earlier on Tuesday that all matches in the top two divisions will be played behind closed doors for two weeks at least.

The sense of deflation at not having any fans on hand was impossible to ignore because before even two minutes were up, Valencia were behind. 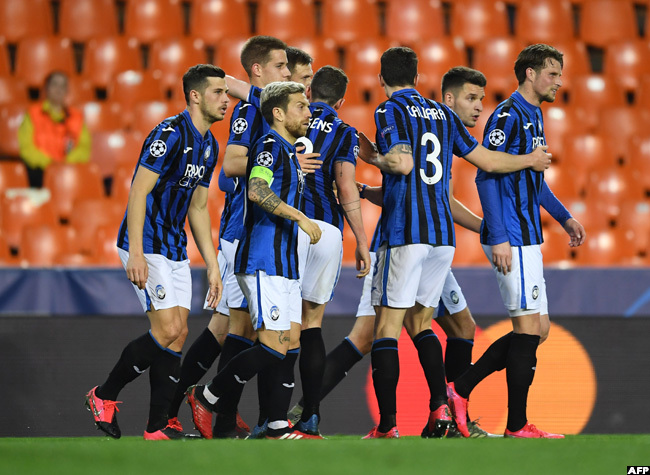 Atalanta have proved to be a goalscoring force

Diakhaby slid in to block Ilicic's dummy-shot and scythed down the striker as he turned back. Ilicic drove the penalty down the middle for his 18th goal of the season.

Valencia equalised after Atalanta conceded possession cheaply in midfield and Rodrigo slid in Gameiro to finish, but Ilicic converted a second penalty before half-time, after Diakhaby feathered the ball with his hand.

Gameiro made it 2-2 by heading in Torres' cross and then Torres found the net himself, lifting the ball over Marco Sportiello to give Valencia some hope with 23 minutes left.

But four minutes later, Ilicic completed his treble with a driven shot into the corner and with progress secured, he grabbed the win too when the ball spilled out to him at the back post and he guided it into the top corner.