Recently, the Minister of State for Gender and Culture caused a media buzz when she warned school matrons against initiating young girls into labia elongation.

Recently, the Minister of State for Gender and Culture caused a media buzz when she warned school matrons against initiating young girls into labia elongation.

If I could turn back the hand of time, I would have said NO! to labia elongation, says Christine Nambatya as she shyly recollects her experience with the traditional practice. It was her first time in a boarding school.

"I was in Primary Five when I came face-to-face with the practice. Older girls were paired with younger ones to guide them. The matron and senior woman would come in the dormitory and announce ‘Let's Go' it was every Saturday after lunch, everyone in school would know what was about to happen.

The boys would react with excitement, it was quite embarrassing," Nambatya recalls. She says time was scheduled on other days for the girls to continue pulling.

The matron, senior woman, and dormitory prefect would follow up on each girl to assess progress. However, some girls would escape. "We were young, resistance would earn you a beating," she says.

Naturally, Nambatya likes having her privacy. "Can you imagine opening your legs for another person to touch your private parts?

Labia elongation hurts, after pulling, it is painful; you swell down there and it is hard to walk," she says.

One time, while pulling in the privacy of her bed, with a bedsheet as her curtain, Nambatya was embarrassingly rebuked by the dorm prefect, who asked her to come out in the open.

"It is these open embarrassments that made the whole experience unbearable," Nambatya says.

Recently, the Minister of State for Gender and Culture, Peace Mutuuzo caused a media buzz when she warned school matrons against initiating young girls into labia elongation.

She told journalists in Kampala that matrons in primary boarding schools were introducing young girls, who are not yet ready for marriage, to labia elongation, yet their partners in the future may not want it.

Mutuuzo threatened to take action, noting that she would find ways of talking to girls, especially in primary schools, on how to report perpetrators of the practice that she said does not add value to their health.

But would people agree with her? Mukono Municipality MP Betty Nambooze shot back at the minister in a media report, saying the practice had been in existence for over 600 years, with no major known hazard to the women who embrace it or their society.

In fact, Nambooze asked Mutuuzo to stay clear of discussing labia elongation and focus on what concerns her.

Just like Nambooze, Dr Adam Kimala, a surgeon at Kampala Hospital, Kololo said the practice has no adverse health implications and research had been carried to that effect.

He also added that the practice is not painful, given local herbs are used to soften the labia before pulling them.

Dr Sam Kalibbala from Mengo Hospital said the practice instead boosts a woman's libido and she gets to enjoy sex more. He views the practice as sacred, done in secret by mothers, aunties, and guardians to prepare young girls for adulthood.

Although the practice has no health complications, it has become a human rights issue because young girls are forced to do it without their consent as Mutuuzo highlighted.

Bryan Ssemanda, an expert, who helps women pull, agrees that labia minora elongation should be a decision one undertakes as an adult and done with consent.

"I have no business with anyone under 18, I only deal with adults, including foreign nationals (Europeans), seeking to pull. They understand their choice,"

Ssemanda says. "These days it is done voluntarily. Even when going for Ekisaakaate kya Nnabagereka (royal enclosure), a mentorship camp, that uses cultural education and heritage to reshape the traditions, mainly for young people from central Uganda, consent forms are signed to undergo the practice.

It is never coercion," another woman says on condition of anonymity. But not everyone agrees with getting consent.

Janet Nanonzi says labia elongation is a cultural practice that should be embraced as it is. "We grew up knowing that we would have to do it. Our aunties would tell us and when the time came, we were not surprised," she says. 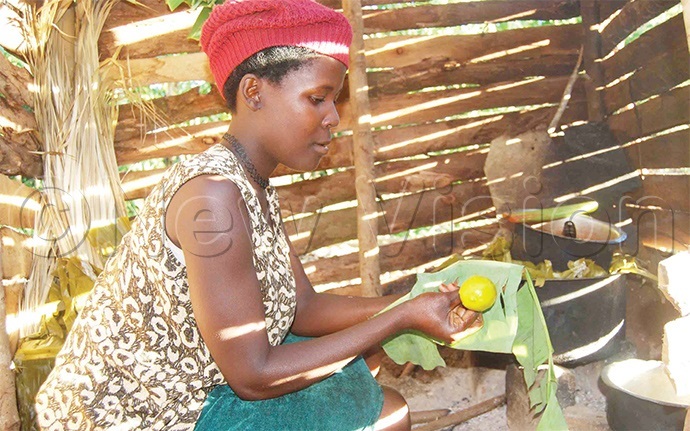 A Woman showing a herb used in labia elongation

Dr Sylvia Tamale, an African feminist, who teaches law at Makerere University, equally says there is nothing wrong with labia elongation and rebukes the West for attacking the tradition.

Tamale says by classifying labia elongation and condemning it as type IV female genital mutilation, WHO lumps this procedure together with FGM procedures that pose health hazards to women.

She says it disregards the ways in which labia elongation, has enhanced sexual pleasure for women and expanded their perceptions of themselves as active sexual beings.

In her 2005 research paper, Eroticism, Sensuality and "Women's Secrets" among the Baganda: A Critical Analysis, Tamale argues that unlike FGM where part of the women genitalia is cut off to slay sexual feeling, pulling elongates the labia minora, which is an enhancement.

Tamale says far from suffering feelings of "incompleteness, anxiety, and depression" that the WHO associates with the practice, most of those interviewed in the study spoke positively of this cultural practice.

One elite woman on condition of anonymity said she is okay with the practice, "as we grow up we appreciate our cultures more and what they stand for," she says.

Nanonzi, who is a mother, worries that a woman who has to pull when grown up and facing demands from the husband is bound to face so much pain. "If done when one is young, the pain is not too much," she says.

Betty Nalwadda, an adult woman in the process of pulling, says: "I have not made so much progress. It is just not turning out as I hoped, but I will keep trying," she says.

Dr Kenneth Kaoma Mwenda, a distinguished thought leader and public intellectual, says labia elongation is customary in many parts of Africa and does not violate the rights of women. But, it can violate African customary law and rights of women, where one is coerced into it or misled fraudulently or negligently into the practice, he says.

This is in his 2006 research paper; Labia Elongation under African Customary Law: A Violation of Women's Rights? published in the International Journal of Human Rights.

In his research, Mwenda states that labia elongation can also violate African customary law and rights of women, where legal norms of a particular society show that labia elongation is contrary to either public policy, other laws of that jurisdiction, or natural justice, good conscience, and equity.

The future of the practice?

WHO has consistently received a backlash from Africans on its perception of pulling, considered class IV FGM. It is argued that when Western women undergo vaginal practices called labiaplasty, a surgical procedure done to reshape a woman's labia minora, it is termed "cosmetic surgery", but when African women undergo practices, such as labia elongation, it is called "FGM"!

Joyce Nalunga, the chief executive officer of Uganda Law Society, says there is a thin line between cultural practice and human rights.

She says there will always be a clash between culture and the law, but in the end, labia elongation is a practice widely embraced and a law can never successfully be enacted against it even when young girls are forced into the practice.

Labia elongation involves manual stretching (pulling) with the aid of oils, creams and herbs. Elongation is only complete when the desired length — usually from two to five inches — is reached, says a 2013 study led by researcher Martínez Pérez.

In many societies, young girls start pulling before their first incidence of menstruation.

Paternal aunts, grandmothers or female peers traditionally help them. It is a mandatory rite of passage common in some societies in eastern and southern Africa. But isn't the labia just enough in its natural form? Must it take elongation to find the utmost sexual pleasure?

The World Health Organisation (WHO) even classifies labia elongation as a form of Female Genital Mutilation (FGM) that involves "partial or total removal of the external female genitalia or other injuries to the female genital organs for non-medical reasons.

When it comes to labia elongation, there is no specific law prohibiting the practice, even if it is classified as FGM, says Joyce Nalunga, the chief executive officer of Uganda Law Society.

There is even politics in enacting laws, "there is no way a law can be introduced against labia elongation where many people embrace the practice, you saw the backlash against the minister," she points out.

Individuals and families uphold the practice; girls continue to embrace labia elongation because they believe their society expects them to do so; otherwise, they suffer social sanctions.