MENU
We are ready to win - Nakiyimba
Previous Story

Over 500 for Primary Schools Swimming Cham...
Next Story

Doreen Chesang crosses the line to win the women 10km race during the TeamUganda Tokyo 2020 run at the Boma Ground in Kapchorwa, March 7 2020. Photos by Michael Nsubuga

The run held at Boma ground in Kapchorwa town on Saturday attracted over 300 runners (both casual and established athletes that participated in 5 and 10km runs.

It was organized in conjunction with the Japanese Embassy, Japan International Cooperation Agency (JICA), Uganda Olympic Committee (UOC), UNFPA and the Ugandan government.

"It was a bit tough but it didn't matter because I was just doing my routine training and just found myself winning. I just shot ahead past everyone," Chesang, 22, who is in camp preparing for the World Half Marathon in Poland said.

Participants in the 10km run in action during the TeamUganda Tokyo 2020 run at the Boma Ground in Kapchorwa, March 7, 2020

The Minister of State for Sports Hamson Obua, in a statement read for him by the National Council of Sports Assistant General Secretary David Katende who represented him, said the government was committed to supporting initiatives aimed at developing sports in Kapchorwa.

"Government is already committed to ensuring that the high altitude center is completed as soon as possible so that our athletes can have use of that facility," Obua stated.

"Government also commits to complete the road to the facility as soon as possible for the benefit of the people of Kapchorwa and also improve the road network in the region," 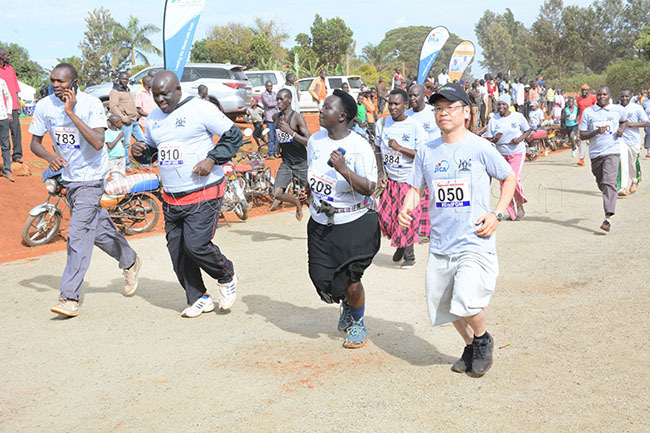 Some of the participants in the 5km run in action alongside Japan Deputy Head of Mission Horri Mizumoto (right) during the TeamUganda Tokyo 2020 run at the Boma Ground in Kapchorwa.

He noted that the run had met a number of objectives including interaction by the different people, showcasing talent and continued to raise awareness on Female Genital Mutilation and thanked all that had made the event successful, and the  UOC for choosing Kapchorwa.

Japanese Ambassador to Uganda Kazuaki Kameda through a message read for him by the Deputy Head of Mission Horri Mizumuto thanked the Uganda Olympic Committee for organizing the road run as an official pre-Olympic event.

"As Kapchorwa is Uganda's holy place for long and medium distance runners, I'm hoping that many athletes from the region will pre-camp in Tateshina town which is also at high altitude, to prepare well for achieving the best performance in the games," Kameda stated. 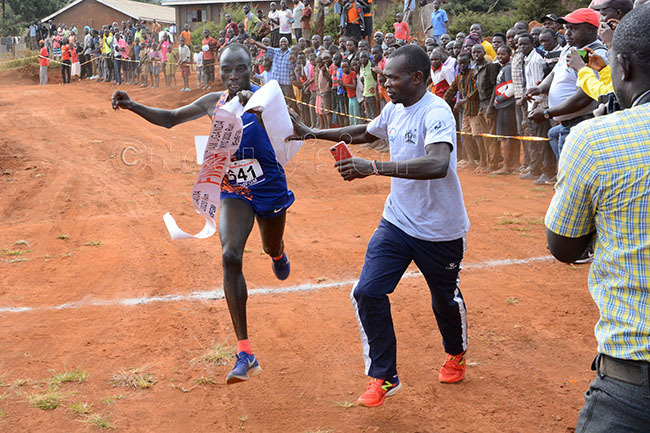 Andrew Kwemoi crosses the line in first to win the men's 10km race during the TeamUganda Tokyo 2020 run at the Boma Ground.

"Though there is a little uncertainty because of the new Coronavirus, be sure that Japan is doing everything we can to contain the spread of the disease, so that we can proceed with the Tokyo 2020 Paralympic and Olympic games as scheduled,"

He said during the games the Japanese in Uganda will be cheering both Uganda and Japanese athletes.

UOC first vice president Ambrose Tashobya also thanked the organizers of the run for bringing the run to Kapchorwa which was becoming synonymous with winning medals for the country.

Japanese volunteers who participated in the run pose with NCS's David Katende and UOC's Ambrose Tashobya and other officials after the run.