According to the World Bank in some countries, violence against women as a result of gender inequality is estimated to cost countries up to 3.7% of GDP more than double what most governments spend on education.

According to the World Bank in some countries, violence against women as a result of gender inequality is estimated to cost countries up to 3.7% of GDP more than double what most governments spend on education.

March 8, 2020, was International Women's Day and this year the theme was "I am generation equality: Realising Women's Rights." The theme addressed how women are marginalised politically, socially, and economically across the world.

According to the World Bank in some countries, violence against women as a result of gender inequality is estimated to cost countries up to 3.7% of GDP more than double what most governments spend on education, Women rights activist and male champion for women Sam Ssemaganda said many times men know the turmoil they unleash on women, their close friends know it too and they even talk about it.

Ogweng grew up in a home stricken with domestic violence in Oyam district; he witnessed violence against his mother as a young man. She was the second wife. To protect us from the wrath of our father she moved 200kms away from him to Moroto district, he says. But, growing up Ogweng had also witnessed many women being abused by their husbands. It was this event in life that pushed him closer to his mother and further away from his father. He knew he wanted to protect the rights of his mother and that of other women the best way he could.

Ogweng was orphaned 33 years ago, as the firstborn, he struggled with life, "so many people who were around me were women - it kind of drew me closer to women," he says.

Ogweng joined The Humanist Movement in 2004 to do something for humanity; he had a quest and passion for women's freedom already. He then joined Uganda police as an IT/Communication officer, there he tried to change the duty roster to give women freedom from night duty. 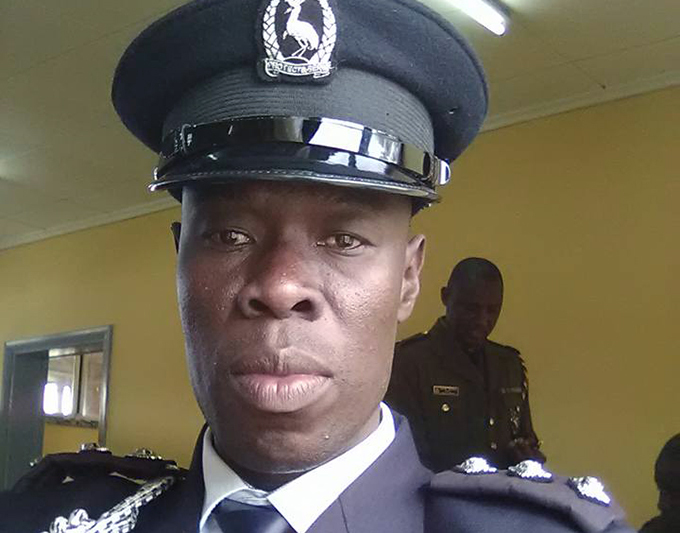 He then joined the Child and Family Protection Department of the police amidst all criticism to find enough space to continue working around women's issues and where his heart belonged.

To be more relevant to the cause of women, Ogweng joined Makerere University for a Master of Gender Studies in 2012 but dropped out due to financial constraints. He went back in 2014 to gain more insight, skills, and motivation to do even more for women

While at Makerere in 2015, a team of ladies from UN Women came to talk about HeforShe campaign, "It was like a dream come true for me, I brought the idea to my boss in the police force and quickly started the HeforShe campaigns in police barracks and churches," he revealed.

In December 2015, with individual support from UN Women, Ogweng organized the first-ever "Walk a Mile in Her Shoes" campaign in Kampala with over 1,000 participants including Hon. Minister Peace Muutuzo.

He organised another campaign against the killing of 22 Ugandan women brutally murdered in November 2017.

His interest is now in Positive Masculinity campaign and scaling up the HeforShe campaign.

Ogweng believes campaigning for women's rights and women empowerment is his responsibility as a man. "Sometimes I feel the responsible people are not doing enough. Some women can't speak for themselves because nobody empowered them to demand their rights, so I want to do it for them. Women's rights are human rights, and the freedom of women will contribute to the socio-economic development for all," he said.

Alain Sibanelar always desired to be a role model and showing that he is am about empowering women and girls to live up to their potential and to enjoy their basic rights. 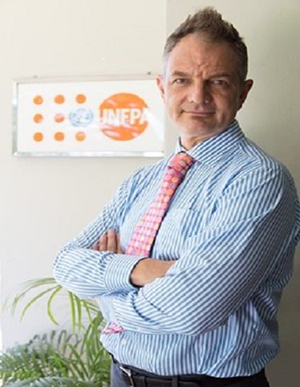 "I believe that I lead by example in my day-to-day work, in that I put actions where my mouth is. This goes from treating every woman and girl with the utmost respect and unequivocal equality to going out of my way to create opportunities - at work, in the family, and in society," he says.

Sibanelar says equal rights between men and women, girls and boys should be instilled in people at all levels, all the time, everywhere in all spheres of life.

Sibenaler is a national of Luxembourg currently serves as the UNFPA Representative in Uganda says the best way men can contribute to the empowerment of women in Uganda is by being secure, kind and caring, and by behaving the way one behaves when in church or in front of parents and children.

A day before he was born, Sam Semaganda a journalist, writer, and poet lost his father. "My mother chose to remain in her marital home to raise me despite efforts by relatives to push her out and inherit property," he says. Also back then, the practice of widow inheritance was the norm, but she refused it.

When Semaganda was much older he started noticing the abuse his mother was going through in the hands of paternal relatives.

"Those were day's women had to tolerate all violence, pain and suffering quietly. I started seeing mistreatment at the hands of my relatives yet they should have been protectors of a young lady with a young man to raise. They turned into brutalizers," he says.

The rights of Ssemaganda's mother were violated. Her property plus land was grabbed. "She could not explain what was going on but I was watching," he reveals.

Ssemaganda adds: "Despite all the inhuman treatment, she refused to be inherited as a widow and was sent out of her marital home and barred from taking me with her. I was left with a paternal uncle, while my mother went to stay with my maternal uncle. That is when my questioning of the place of .women and their rights in society began."

"I saw how vulnerable and helpless her position was in society. My mother was forced to leave me behind. That is when I knew something was wrong," he adds.

As a result of his mother denied her rights, and being separated from her son, Ssemaganda went through a lot of dehumanizing treatment.

"I could only turn to myself for help. I asked myself questions to which I never had answers. I was my only hope" he says.

Ssemaganda would start fighting for women at a very tender age.

"I was given one chance to visit my mother, I never went back. I started life afresh with my mother, bonding again, learning human values through stories she would tell. I got knowledge. I knew I wanted to protect her and other women. It's impossible for me to get off this journey," Ssemaganda states.

Ssemaganda has written poems and the book titled "Enough". It speaks volumes about women's rights and empowerment. It jerks you out to think what is enough? Ssemaganda's poems and other writings are meant to empower, celebrate and inspire women," Owembabazi adds.

Upon reading my book, several women have opened up. Women looking for safe space, are telling their story, in this book they find their courage, the book encourages women to speak up," he reveals. As students of gender studies, we are encouraged to impact our communities with the knowledge we get and to that effect, Mensah partnered with fellow student and women activist ASP Francis Ogweng and a lawyer friend.

Their interest was on ending GBV but upon scrutinizing action on eliminating the vice was always focused on women and nothing was directed towards the men known to be the main perpetrators of GBV.

Mensah who is a Ghanaian national now settled in Uganda with a Ugandan partner and child collaborated with Ogweng to start Wang-oo (a Luo word for a fireplace) where men sat around the fire and where taught how to be men.

Our approach engages men by going back to the place that groomed men to be aloof towards women, to deconstruct the negative traditions taught to men that perpetrated GBV.

We sit around the fire with other men, share statistics of GBV, the impact of GBV on families and the need to end the vice and respect women, says Mensah. And it has worked. It's from here that they get male champions to engage other men.

Mensah says the impact of GBV affects everyone, including the man, woman, child, community, and nation. Wang-oo has brought the men around the fireplace for the discussions on women empowerment. They are reaching out to bodaboda groups, and farmers groups among others.

We teach them the impact of GBV, the law and positive masculinity (the role men can play to create a happy environment at home), says Mensah. They have partnered with other UN women to bring an end to issues of GBV. Ogweng says everyone should do whatever little they can do at all levels to promote women's rights.

"Equality issues should be discussed at family, community, schools and colleges, parliament and the entire government," he says.

Ogweng says the government needs to support and open space for women to participate in all spheres of life.

"Since men are the primary perpetrators of GBV, involving them in the push for gender equality is a solution. We need constant dialogue, engagement, and involvement of men in the programs and activities that promote gender equality to suppress and stop GBV. Men who are passionate about gender equality needs to be supported and encouraged to do even more," he says.

Arcades are open for business