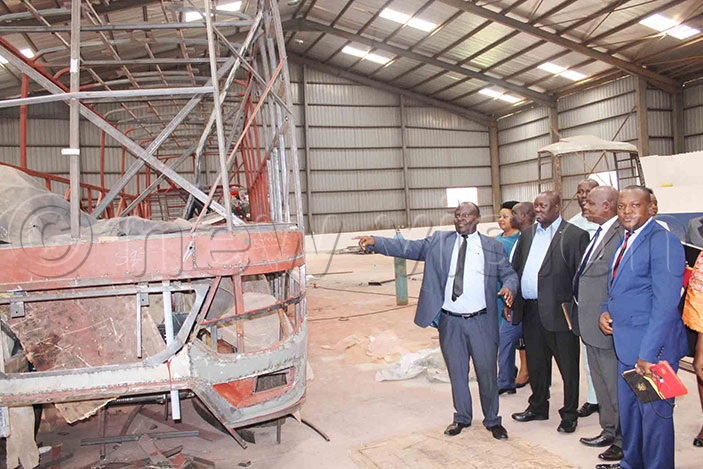 Legislators on the House Committee on Trade and Industry want Ugandan firms to be considered in the procurement and supply of the buses for the proposed city buses project.

The Kampala Capital City Authority (KCCA), Ministry of Works and transport and a registered private firm are in talks to establish a bus transport system covering Kampala Metropolitan Area.

However, a whistleblower petitioned the Inspectorate of Government early this month with concern that the project flouts procurement laws and has no provision for local suppliers.

Lawrence Mangusho Cherop, the vice-chairperson of the trade and industry committee said the lawmakers want the project to involve local companies to boost skills and job creation.

"The success of Uganda's economy will as well depend on how much we encourage Ugandans to buy and use our locally manufactured goods and services," he said.

Mangusho made the call on Friday shortly after a visit with committee members to Metu Zhongtong Bus Industries in Namanve Industrial area, Wakiso district.

The company fabricates and assembles buses at the plant and its proprietor, Eng Metu Katabazi says his firm has capacity to produce all the buses required for the project.

The committee is investigating complaints from local manufacturers that they have been excluded from the project as authorities consider purchasing 980 buses from India.

The probe by the trade and industry committee follows a petition raised in Parliament last week by Fort Portal Municipality MP, Alex Ruhunda.

Ruhunda argued that purchasing buses from India was a disservice to local bus manufacturers who have the competence to produce them at home.

He insisted that the project should instead be handed to a local assembling plant to supply the buses, and not Indian firm as it has been reported.

The lawmaker argued that with the Buy Uganda Build Uganda (BUBU) policy in place, there is no reason as to why the City Authority would hire services from as far as India.

The Speaker of Parliament Rebecca Kadaga subsequently instructed the committee to investigate the procurement of new city buses.

"I think as Ugandans, we should really try to promote our country; if we are going to create employment in other countries and we have unemployment here, it is not right," Kadaga said.

The Hoima Woman MP Harriet Businge Mugenyi said: "when local bus manufacturers are considered to sale buses, it  will create employment, contribute to payment of taxation,"

The committee, which has one week is to dig information on the suppliers of the buses, under a project known as Tondeka metro, has interfaced with the parties involved.

The Committee is expected to report its findings on Thursday next week.

Kampala Capital City Authority (KCCA) has signed an undertaking to improve public transport in Kampala, with at least 980 buses as first consignment for the Tondeka Metro services.

The assembly has capacity to produce up to 50 buses per day, and has since attracted business from private operators; both schools and investors in the public transport sector.