Finance ministers and central bank chiefs from G7 countries will hold talks Tuesday amid rising global uncertainty over the epidemic.

Passengers with protective masks look at a flights information board at Suvarnabhumi airport in Bangkok. (AFP)

Finance ministers and central bank chiefs from G7 countries will hold talks Tuesday amid rising global uncertainty over the epidemic.

The global death toll from the new coronavirus topped 3,000 on Monday, as airlines cancelled or reduced flights and stock markets swung wildly.

Andorra, the Czech Republic, Indonesia, Jordan, Latvia, Portugal, Tunisia and Saudi Arabia were among countries that confirmed their first cases, along with Senegal, which became the second sub-Saharan African country to do so.

Africa is feared to be particularly vulnerable with its widespread conflicts, poor health infrastructure, porous borders and crowded cities with inadequate sanitation.

More people died in China, Iran and the United States from the virus, which has now infected nearly 90,000 people with cases in more than 60 countries. 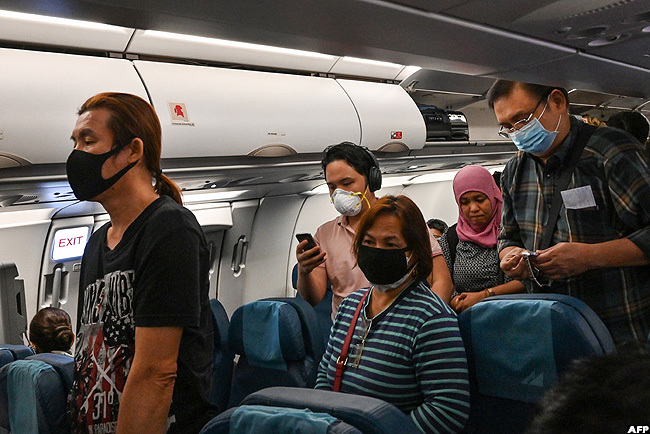 With fears of a pandemic on the rise after the virus first emerged in China late last year, the World Health Organization urged all countries to stock up on critical care ventilators to treat patients with severe symptoms.

The UN health agency announced on Monday that in the last 24 hours there had been almost nine times more COVID-19 cases reported outside China than inside the country.

WHO chief Tedros Adhanom Ghebreyesus said a "window of opportunity" remained to contain the outbreak, noting that "more than 130 countries have not detected any cases yet".

In the countries with cases, the situations in South Korea, Iran, Italy and Japan are currently "our greatest concern", he said.

In Brussels, the European Centre for Disease Prevention and Control (ECDC) increased its risk assessment for Europeans to a range of "moderate to high". Hours later, Italy announced that its deaths from the virus had jumped 18 to 52.

When talking about #COVID19, certain words & language may have a negative meaning for people and fuel stigmatizing attitudes https://t.co/yShiCMfYF3 #coronavirus pic.twitter.com/d54qL4LY2H


The virus has raised fears for the world economy, with the OECD slashing its global growth forecast by half a percentage point to 2.4 percent, the worst performance since the 2008 financial crisis.

Finance ministers and central bank chiefs from G7 countries will hold talks Tuesday amid rising global uncertainty over the epidemic, the US Treasury said Monday.

Stock markets were exceptionally volatile as investors tried to pinpoint the likely cost of the coronavirus crisis for world business.

But strength on Wall Street -- which rebounded from sharp losses last week to post gains of more than two percent Monday -- helped European markets emerge from the red after governments and central banks said they would step in if needed to soften the blow.

China's economy has ground to a halt with large swathes of the country under quarantine or subject to strict travel restrictions.

Other countries have started to enact their own containment measures, banning arrivals from virus-hit nations, locking down towns, urging citizens to stay home and suspending major events such as football matches and trade fairs.

The Louvre -- the world's most visited museum -- was closed on Sunday and Monday after staff refused to work because of fears about the virus, which has now claimed three lives in France. 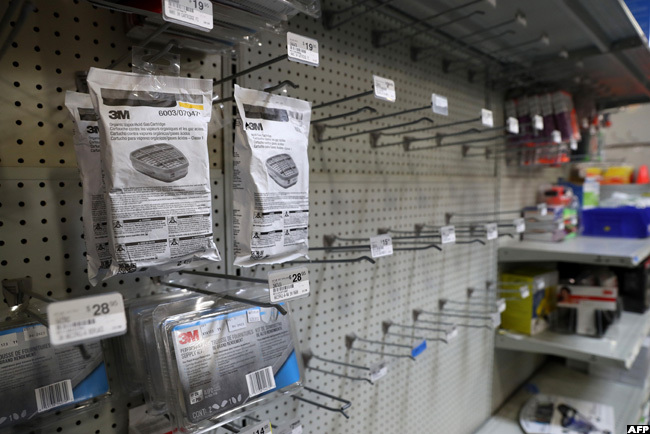 Shelves where protective masks were once displayed sit empty at Jackson Hardware in San Rafael, California

In Geneva, the UN headquarters said it was closing its doors to visitors and curbing some activities linked to the UN Human Rights Council.

In Italy, tourist hotpots including the Duomo in Milan reopened to visitors but access was limited to avoid overcrowding in a bid to contain the virus.

Italy is Europe's worst-affected country with around 1,700 infections.

Elsewhere in Europe, Sweden barred flights from Iran -- where cases have rapidly ballooned -- while France, Germany and Britain said they would send medical and financial aid to the Middle Eastern nation struggling to contain the outbreak.

Iran reported 12 more deaths on Monday, raising the country's toll to 66, the second biggest after China's.

It also reported more than 500 new cases, raising its total number of infections to 1,501. 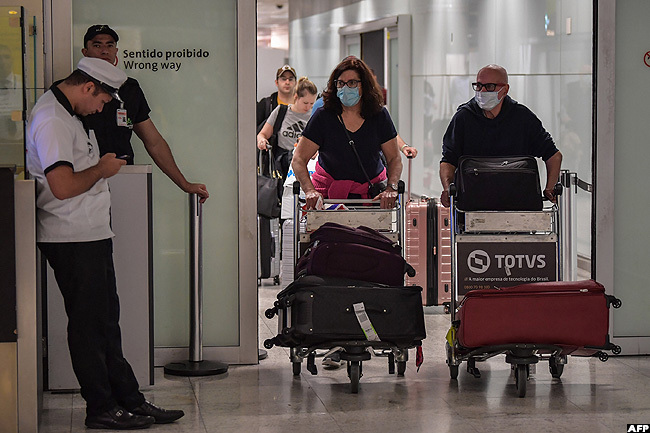 China reported 42 more deaths on Monday -- all in central Hubei province, bringing the death toll to 2,912. The pathogen is believed to have originated in a market that sold wild animals in Hubei's capital Wuhan.

In a sign of an apparently improving situation, authorities in Wuhan closed on Sunday one of 16 makeshift hospitals built or repurposed from public buildings to treat the city's huge number of patients.

The WHO says the virus appears to particularly hit people over the age of 60 and those already weakened by other illnesses. It has a mortality rate of between two and five percent.

Infections are now rising faster abroad than in China, as the country's drastic measures, including quarantining some 56 million people in Hubei since late January, appear to be paying off. 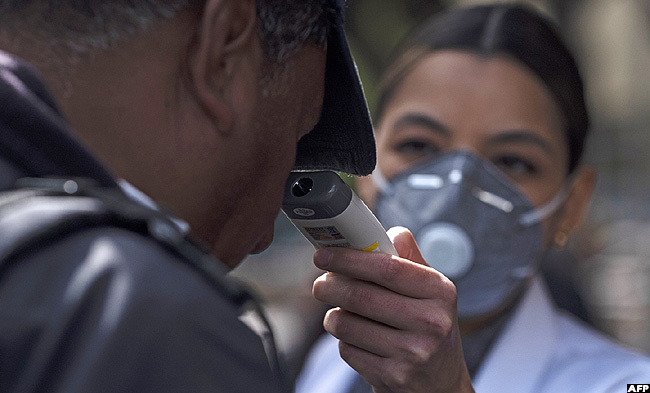 A nurse checks a man's temperature at the entrance of Tijuana's General Hospital, in Tijuana, Mexico

Four more people died there, taking the country's toll to 22.

Half of South Korea's cases are linked to a sect whose leader Lee Man-hee apologised Monday for the spread of the disease.

Seoul's city government has asked prosecutors to press murder charges against him for failing to cooperate in efforts to contain the virus.

South Korea's cases are expected to rise further as authorities test more than 260,000 people associated with the group.

Meanwhile, a second person died in the northwestern US state of Washington as President Donald Trump, who has played down the risk of a major outbreak, faced criticism over his administration's preparedness.

He was due to hold talks with pharmaceutical executives on the response to the outbreak.

New York reported its first case, in a woman who had visited Iran, and the governor said he expected the virus to spread in the global financial hub.