Klopp to beef up FA Cup side as Liverpool ...
Next Story

FROM L-R: Osmond Atwine, the Public Relations officer of Tennis,  UTA President Cedric Babu(C), Ismael Dhakaba, the head of corporate affairs at NCS and James Kasumba the NCS Technical Assistant for Tennis at Uganda Olympic Committee during the Launch of the 4th edition of East Africa Junior Teams competition on Monday

Babu was speaking at the launch of the fourth edition of the competition for both boys and girls aged 12  and under the Uganda Olympic Committee Offices today.

Uganda will be joined by Tanzania, Seychelles, Sudan, Burundi, Kenya and Ethiopia for the five-day competition that will take place at the Lugogo Tennis complex starting Tuesday until Saturday.

"We believe many players will have a chance to expose their ability. Our main intention as Uganda Tennis Association this year is to develop talent directly from the grass root", noted Babu.

National Council of Sports through its head of Corporate Affairs Ismael Dhakaba Kigongo and James Kasumba, an assistant secretary in charge of technical revealed at the press conference that the sports governing body had contributed sh12m towards the event.

Uganda is the defending champions in the girls' category after a team of Maggie, Flavia Namaganda,Eseza Muwanguzi and Paula Awino qualified in Nairobi last year to represent East Africa at the AJC held at the Moundir Tennis Academy in September, while the boys finished second runners up. 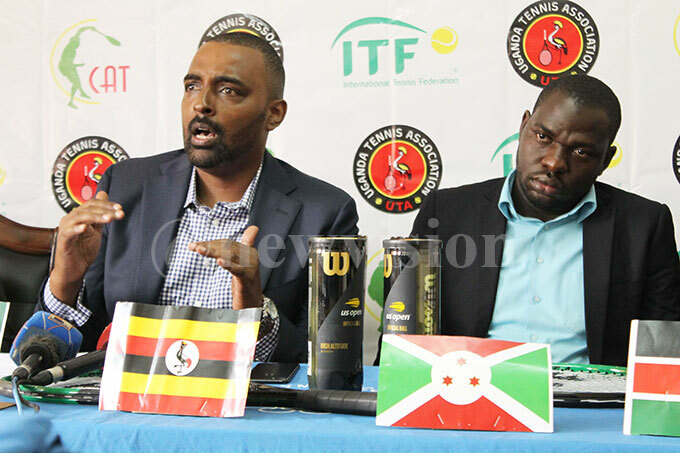 The competition that is largely funded by International Tennis Federation (ITF) will be played in two pools of three to four teams each on a Round Robin format over three days, while the teams ranked first and second, will qualify to compete at the playoff pool four.

According to Alvin Bagaya, the tournament director, each qualified team will compete in the playoff pool with the two other teams, while considering the result recorded between the two teams that played previously as registered.

At the end of the playoff pool, the team ranked first in the boys and the two best teams ranked 1st and 2nd in the girls will be qualified to participate at the final event of the AJTC for 12 years.

The Ugandan team that is camping at Noble View Hotel just like other participants from the six countries that will take part in the competition, is being handled by coaches Edward Odocken and John Oduke.