Pep Guardiola hailed his Manchester City side's desire to leave a lasting legacy after lifting a third straight League Cup by beating Aston Villa 2-1 at Wembley on Sunday thanks to goals from Sergio Aguero and Rodrigo.

"(Since) we won the first title here against Arsenal in the League Cup we played 11 competitions and won eight. Is a lot," said Guardiola.

"For this club, it is not just about one title it is about showing every game we play counts and we want to win. 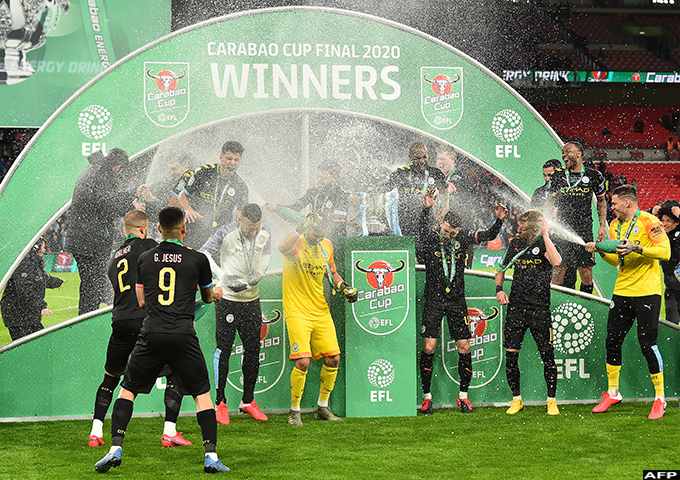 "Everybody knows we have the responsibility to fight, to try to win the titles. Eight out of 11 is something remarkable."

After City sped into a 2-0 lead inside 30 minutes, Mbwana Samatta pulled a goal back for Villa, but their wait for the club's first silverware since 1996 goes on.

"I'm disappointed. Everyone wrote us off, but there was a lot of belief in that dressing room," said Villa boss Dean Smith.

"Unfortunately you have a mountain to climb against a team like Man City when you go 2-0 behind."

Guardiola made eight changes from the side that won 2-1 at Real Madrid in the Champions League on Wednesday with Kevin De Bruyne among those left on the bench.

However, it mattered little as City had the luxury of recalling Aguero, Raheem Sterling and David Silva to the starting XI, and the gulf in class showed.

Guardiola's raft of changes also handed a rare start to Phil Foden and the 19-year-old more than justified his selection with a man-of-the-match performance. 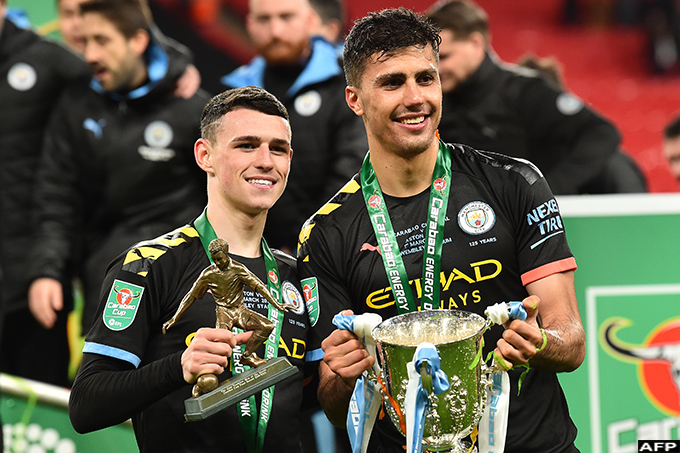 Rodrigo's fine pass picked out Foden to head back into the path of Aguero and the Argentine's deflected effort beat Orjan Nyland in the Villa goal to open the scoring on 20 minutes.

Villa felt aggrieved at the source of City's second as Jack Grealish fired the ball off Ilkay Gundogan for what should have been a goal kick.

Instead, City doubled their lead as Gundogan's corner was met with a powerful downward header from Rodrigo.

Villa could barely even get a touch for the next 10 minutes as the holders threatened to run riot in a repeat of the 6-1 thrashing they handed the hosts at Villa Park in January.

Sterling had a glorious chance for his first goal of 2020 deflected behind by a brave block from Tyrone Mings.

But moments later the reason Mings is ahead of John Stones in the pecking order for England selection became clear as the City defender fell over his own feet to give Villa a lifeline.

A long ball forward eventually came to Anwar El Ghazi and from his cross Samatta headed low past Claudio Bravo to the delight of the travelling thousands from Birmingham and Villa fan Prince William in the stands.

The difference in the desperation for success between the two supports was obvious as Villa were roared on vociferously throughout, while City failed to sell out their allocation.

City's failure to turn their dominance into more goals in the second half gave those Villa fans belief in a fairytale fightback.

And it very nearly arrived three minutes from time when Bjorn Engels rose highest at a corner only for the often-criticised Bravo to turn his header onto the post and maintain City's grip on the competition.

I am already training for 2016 Olympics-Kiprotich

Why Kiprotich trains in Kenya