Thousands turn up for Roast and Rhyme
Next Story

Kaziimba succeeded the Most Rev. Stanley Ntagali who reached the mandatory retirement age of 65 years.

Kaziimba succeeded the Most Rev. Stanley Ntagali who reached the mandatory retirement age of 65 years.

KAMPALA - President Yoweri Museveni has congratulated His Grace Dr. Stephen Samuel Kaziimba Mugalu on his elevation as the new Archbishop of the Province of the Church of Uganda.

The President, accompanied by his wife Mrs Janet Museveni, was speaking at St. Paul's Cathedral Namirembe in Kampala during the ceremony of the enthronement and installation of Dr Kaziimba as the 9th Archbishop of the Church of Uganda. 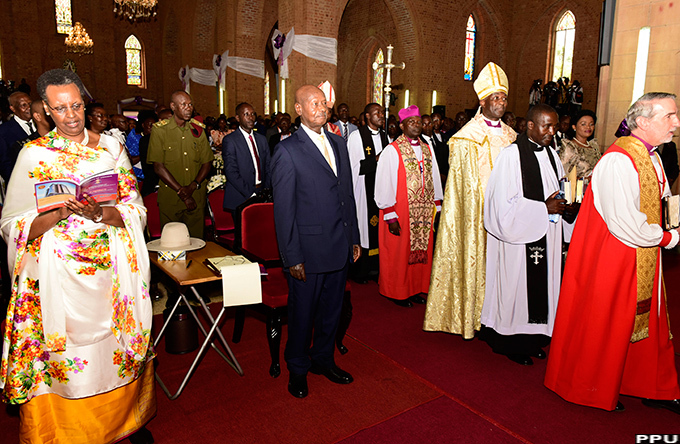 He has succeeded the Most Rev. Stanley Ntagali who reached the mandatory retirement age of 65 years.

The new Archbishop was on 28th August 2019 elected by the House of Bishops of the Church of Uganda as the 9th Archbishop of Uganda and Bishop of Kampala Diocese effective today. Dr Kaziimba Mugalu was Anglican Bishop of Mityana Diocese from 2008.

Addressing the congregation at the new Archbishop's enthronement and installation ceremony at St. Paul's Cathedral today, President Museveni commended the work of Dr Kaziimba Mugalu while he served as Bishop of Mityana Diocese. 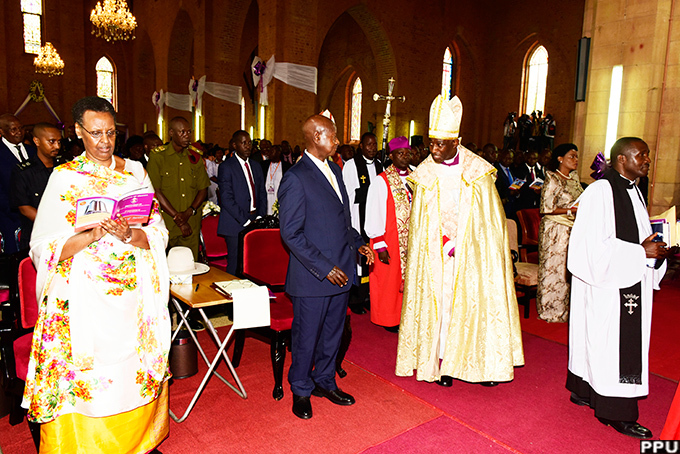 "I congratulate our good friend Archbishop Kaziimba for the elevation to the Archbishop of the church of Uganda," the President said.

"I can be a witness that he indeed did a good job in Mityana.  I am sure he will spread it to the whole of Uganda," he added.

Museveni used the occasion to thank the outgoing Archbishop, the Most Rev. Stanley Ntagali as well as former Archbishop Henry Luke Orombi, for their great contributions to the Church of Uganda, especially the Church House and other infrastructure projects that, he observed, will help the church in Uganda to be self-reliant.

He reiterated the NRM Government's long-time belief in freedom of worship of all people adding that as Christians, there is a need to influence others by example. 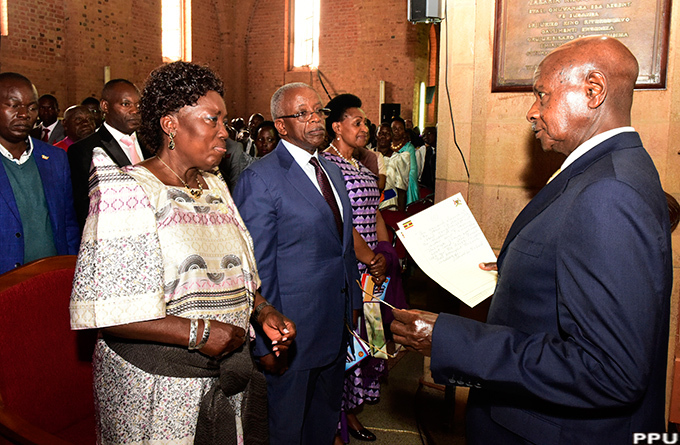 He noted unlike, in the past where people were killing each other on account of belonging to different religions, there is now a well-structured body of the Interreligious Council in the country; adding that this was good in making people live in harmony following the teaching of Jesus Christ.

The President highlighted two important elements of Christianity as being assurance about Jesus' resurrection and unconditional forgiveness and love for all our enemies.

The visiting Archbishop of Canterbury, the Most Rev. Justin Portal Welby, extended his greetings to the people of Uganda and emphasised the aspect of seeking forgiveness irrespective of our differences. He saluted the Church of Uganda for transforming the lives of the people.