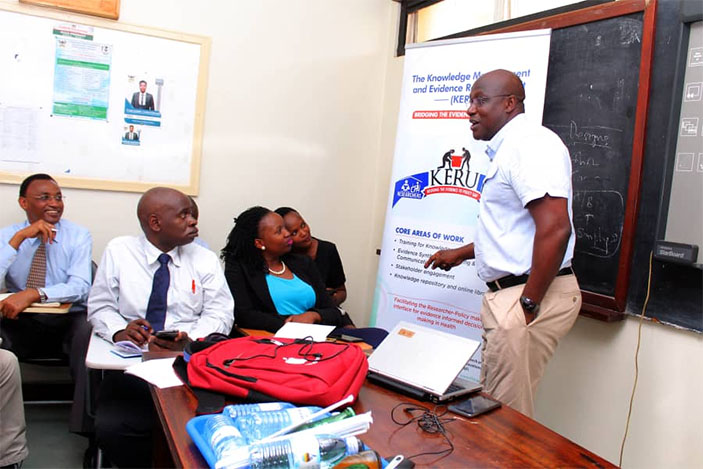 Researchers have been urged to find innovative ways to ensure that the evidence they accumulate is used in the policy-making process.

According to Dr Rhona Mijumbi-Deve, a knowledge broker and director of the Centre for Rapid Evidence Synthesis (ACRES) at Makerere University, policy-makers have shown the intention to use evidence, which means there is demand for evidence and information to guide policy-making.

However, Mijumbi-Deve added that the policy-makers meet barriers and challenges that make it hard for them to use the evidence. "One of the challenges is that those who need the information do not know how to ask for it and how to use it," she noted.

Mijumbi-Deve made the remarks during a recent seminar at the Makerere University School of Public Health.

The seminar was organized by the Knowledge Management and Evidence Response Unit (KERU) under the theme "Bridging the Gap Between Evidence and Policy: Experiences, Challenges, Lessons, and Priority Areas for Action".

KERU seeks to enhance efforts of bridging the research to policy (practice) gap in Uganda.

This is because it is believed that the success of policy largely depends on the extent to which its formulation was influenced by evidence, noted Chrispus Mayora, the principal investigator for KERU.

However, Mayora added, a lot of research and evidence generation is happening in universities and other research institutions, but not much influences policy and decision-making.

Mayora noted that challenges that hinder policy-makers from using research-based evidence include:

- Policymakers are not involved in the research process so they do not want to associate with the evidence.

- Researchers complain that policymakers do not give them platforms, so they have limited opportunities to present their evidence to the policy-makers.

Mayora also noted that policy makers complain about a lack of a national database for accomplished research, thus, making it difficult to be accessed, which limits translation of research findings into policy.

There is lack of coordination, dialogue, and continuous engagement between key stakeholders, researchers, funders, and policymakers to address complex public health problems.

In order to promote the use of evidence, researchers have been urged to package the information in a simple way so that those who need it can easily comprehend it.

Dr. Timothy Musila, a senior health planner in the health ministry, noted that how evidence is framed and delivered is key to adoption in informing decision-making, and implementation.

However, Musila decried the fact that a lot of research does not get to influence policy because the evidence is packaged in complex form, and not customized to our context. Musila also highlighted the need to translate research into actionable points.

More so Mijumbi-Deve called for partnerships all the way from where evidence is generated (informants in research) up to where it is used.

She added that partnerships should involve sharing resources in terms of time, capacities and funds, so as to make a big impact.

In order to build strong partnerships, Musila underscored the need for researchers to network and have regular interactions with mapped influencers and key policy entrepreneurs and lobbyists.

Mijumbi-Deve also highlighted the role of media, especially social media, in knowledge translation and urged researchers to use media to communicate evidence and let people know about what they have created.

She noted that media will help researchers to communicate right and make a bigger impact because media simplifies and contextualizes issues.

KERU is a platform that aims at bridging the gap between researchers and policymakers by addressing challenges that bring about the gap, noted Chrispus Mayora, a health economist and the principal investigator for the KERU project.

Mayora added that there work aims at:

- Enabling policymakers be part of the evidence generation processes

- Creating a Knowledge repository for research evidence on health systems, done in Uganda and the region