Her demands forced me to become single - S...
Next Story

A few months after the boda accident, I went for casting for a big Ugandan fashion show but one of the casting people dismissed me because I had a scar.

A few months after the boda accident, I went for casting for a big Ugandan fashion show but one of the casting people dismissed me because I had a scar.

On March 28, Barbara Namuddu will be the first Ugandan model to represent Uganda in the top model UK competition in London. She spoke to Steven Odeke about her climb to the top and the rejection she suffered at home.

Congratulations upon that feat. How exactly did the organisers spot you?

It was through social media. I was looking for an opportunity and I landed on this competition on social media. It was around June last year and Top Model UK had made a call for top models around the world to participate in the 2020 edition on March 28 at the Amba Hotel Charing Cross in London. I sought their email address and asked them if a Ugandan was eligible. They asked me to send them my photos, videos and other details. I did as asked and I was lucky to be among those who were selected.
Okay, so how does it feel to be the first Ugandan to participate in Top Model UK?
I do not take it for granted. It is a good thing and I see us (local fashion industry) growing. I see this as a global platform for me and Uganda. I am looking forward to making partnerships for the good of our fashion industry.
What exactly are you going to be doing at the competition?
I will fly to London on March 17 and when I get there, I will get in touch with the event organisers. We shall then meet the press and do charity activities. The Top Model UK supports two charity foundations — one deals with children suffering from cancer and the other one known as Top Model Foundation supports sick children and children in need. I will be supporting the Top Model Foundation. Every model who will participate in the competition will do charity. There will also be fashion events, parties and meetings with various partners.
What will you benefit out of this? Any cash prize or something like that?
Yeah, there are prizes. When you look at the history of Top Models, it has a track record of discovering talent, launching careers and creating dreams. Most of its winners and finalists have signed up agencies. Once an agency signs you, you work with professional models, get international publicity and take part in London Fashion Week, that is a big thing. Then, of course, there are awards for all the winners.
That is impressive. Why haven't Ugandans participated in this before?
There is not much unity among Ugandans when it comes to fashion. People do not support each other. Everyone is selfish. We need to push one another and see one's rise, not as competition but an opportunity. If we start doing that, we shall get somewhere.
Has modelling been part of you since childhood?
Yes, growing up, I was always passionate about modelling. I wanted to be a model because I was a tiny, dark and tall girl. Everyone used to say I should be a model. I looked up to supermodels like South Sudanese Alek Wek and in 2014 I saw Stacey Aamito shine; she was tall, dark and skinny. It was after this that I seriously considered becoming a model. 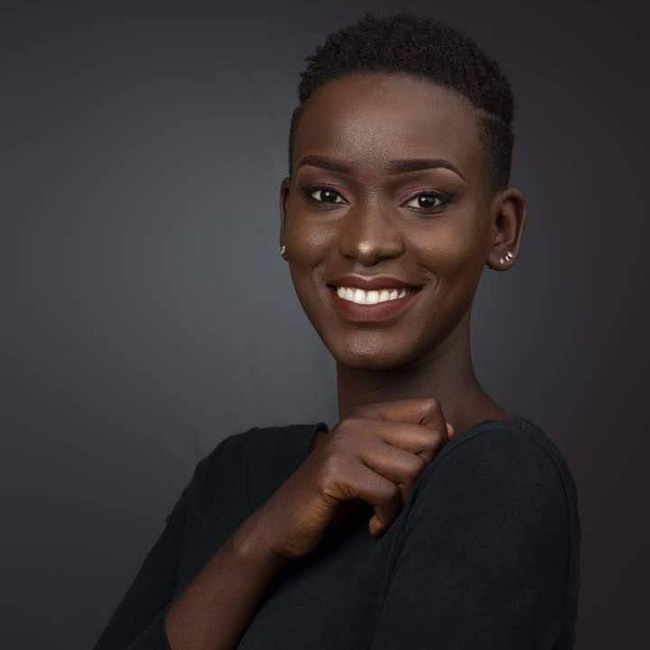 Namuddu (Facebook) Namuddu (Facebook)
Did your parents support your childhood ambition of becoming a model?
I was raised by a single mother, Esther Nantege, who ensured I got all the love and support one can get from a mother. It is from her that I learnt how to be strong. I learnt what it means to be loved. The love I got as a child keeps me going and rising above all these contradictions.
At first, she was hesitant to support my dream because like most Ugandans, she thought modelling would never give me a decent life. But eventually, she supported me and kept encouraging me to pursue my dream. That is the power parents wield. When you see talent in your child, support them to achieve what they want.  My mother did that by supporting me.
When did it start for you?
The first fashion show I participated in was at the Miss Teen in 2013. I was still in high school and I did not even make it to the finals. After Miss Teens, I got the courage to go for the Miss Uganda beauty pageant in 2015 where I finished as the first runner-up in the central region.
It also gave me a glimpse of the reality in modelling. It is while participating in Miss Uganda that I made up my mind to be a model and also develop my passion for charity. That is why I have worked with different charity organisations such as Reach A Hand and Hand Is A Difference.
I have been dealing with young children and women for much of my work. I also volunteer at National Christians Students Association (NCSA) as a motivational speaker and facilitator.
Who is Barbara Namuddu?
I come from a family of three. My childhood was all about mummy and my big brother. My parents separated when I was three. My father passed away in 2015 on the day I was auditioning to participate in the Kampala Fashion Week. It is not that I did not love my father, but it is my mother that I give a lot of credit because she ensured I had all the love I needed.
Education?
I went to St Anne Primary School, Kawempe and Kawempe Decorous Primary School in Kampala. For secondary, I went to Katikamu SDA Secondary School (up to Senior Three) and Kisaasi College School, Kampala (Senior Three to Senior Six).
Why modelling…
I would like to live the life of top models and work with different prominent fashion designers, do expensive shopping and have the platform to share my story. When you become a top model, you are given press attention. And the more you share stories, the more you change lives and inspire many out there.
Inspiration…
I looked up to Alek Wek because she was dark-skinned and came from a place ravaged by war. She beat all the odds to reach the international stage. That meant she was strong and focused. She was in a world where dark-skinned models were not really appreciated but she excelled. I loved her zeal and hard work.
Any achievements so far?
My biggest achievement was when I was in Addis Ababa at the Hub of Africa Addis Fashion Week (HAFW). Out of the over 2,000 models from all over the world present, my face appeared on the Vogue Italia photo gallery cover page. If you want to find about HAFW 2017, you will see my photo featuring prominently. That gave me the confidence and power that I have as a model. Namuddu in the middle on the runway (Facebook) Namuddu (Facebook)
Challenges…
Apart from the rejection I got because of the scar on my leg, I would say we, in the fashion industry, need to get a place where we support one another. For instance, I am going to represent Uganda internationally, which is a big thing for the fashion industry.
Maybe we get like a franchise that can bring together fashion models, designers, photographers and all. That is more like a challenge today but everything is good.
Are you in a relationship?
I am not in a relationship because boyfriends make girls fat. An accident that nearly ended my career
I was preparing for a fashion show that was three days away and at the same time volunteering at a charity event in May 2016 when I was hit by a bodaboda. As a model, I knew my life was over. For a month, I was unable to walk because of the injuries. But all I wanted was to be a top model and that kept me going. I prayed to God to keep me going.
A few months after the accident but still with a huge scar on my leg, I went for casting for a big fashion show here. One of the casting people dismissed me because of my scar. That hit me really hard. There is one fashion designer who insisted I take part in the show because he liked my face; he told me he would get me a dress long enough to cover my scar. A few months after that show, I did gigs for companies such as Bell Lager and Grab A Life campaign. This was a new journey.
Than in October 2017, I got an opportunity to take part in the Hub Of Africa Addis Fashion Week (HAFW) in Ethiopia for Adama Paris, a prominent Senegalese fashion designer.
Before Hub Of Africa, I was in Rwanda for Collective Rwanda Fashion Show, where I walked for Laduma Ngxokolo, a prominent South African fashion designer and, what fascinates me is that all these people did not care about the scar-like the casting person; all they cared about was the talent. So, right now, I look back from being rejected, the accident and now representing Uganda at an international stage and it gives me more confidence.

Patricia Otoa quit her job to start a clothing line

Pulling is a choice