Why star students fail to keep top grades?
Next Story

"The fact that more learners can transit to the next level means there is more efficiency in the education system," says education and sports minister Janet Museveni .

"The fact that more learners can transit to the next level means there is more efficiency in the education system," says education and sports minister Janet Museveni .


KAMPALA - The results of the 2019 A'Level exams were released Thursday, indicating improved general performance and with the female candidates beating their male counterparts.

Thankfully, cases of examination malpractice at this level have been low this time round, with 126 results withheld. 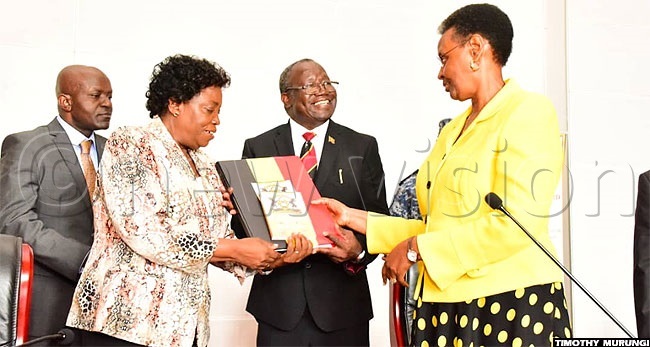 The results were released at the Office of the Prime Minister

Education and sports minister First Lady Janet Museveni called for the relaxation of the cut-off points for admission at A' Level to accommodate more learners wishing to take up science disciplines.

She said improved performance in last year's exams is a reflection of better efficiency and translates into reduced wastage of resources.

"I am happy to note that performance has improved and more learners have qualified for tertiary education. The fact that more learners can transit to the next level means there is more efficiency in the education system, I believe.

"This leads to less wastage of resources invested in the sector," said Mrs Museveni in her remarks at the Office of the Prime Minister after releasing the exams.

Out of the slightly over 103,000 candidates who sat the exams, as many as 65,000 are eligible for university admission. 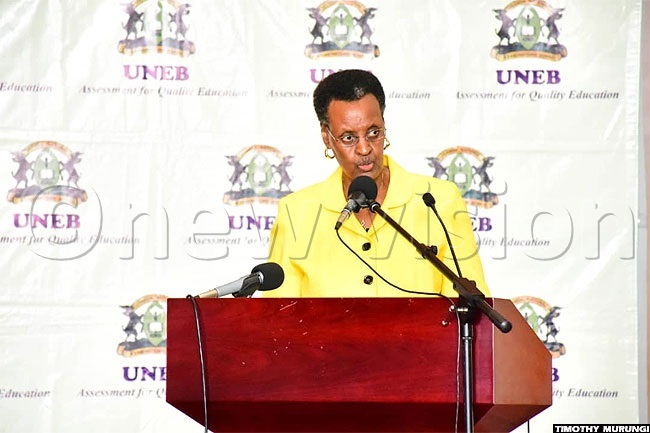 "I am, however, very concerned about the very low transition from UCE to UACE  in the sciences," added the education minister.

"I am even more concerned about the very low number of girls in the sciences. Regrettably, this is happening despite the fact that Government, through the Ministry of Education and Sports, has invested heavily in provision of teaching and learning materials and laboratories."

"Deliberate efforts now have to be made to increase the number of science teachers and improve their welfare in order to raise the numbers of students in sciences and improve performance," she said. 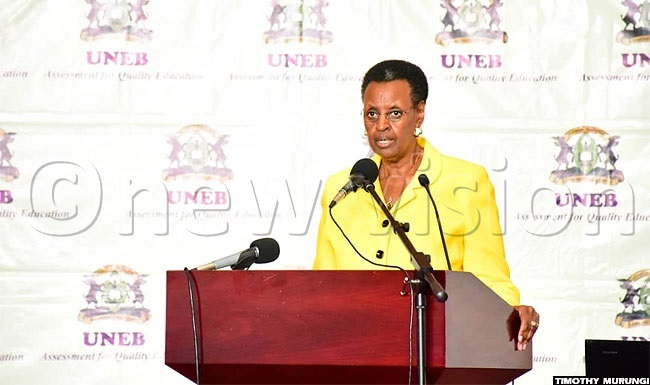 Meanwhile, the education minister feels that learners should be given a chance to pursue their science ambitions.

As such, she re-echoed her previous call to schools to relax the selection noose at the O' and A' Level border.

"I learnt in 2016 that part of the low numbers of students taking sciences could be attributed to the very stringent selection criteria by schools - that is by admitting only students with distinction scores at UCE. I then appealed to schools to relax this unrealistic demand because a child with a Credit Three or Four at UCE should be able to comfortably study a science subject at UACE.

"I want to reiterate that appeal now, because Mathematics and sciences are at the heart of industrial development, which is crucial to taking our country to another level," said Mrs Museveni.

She also rallied learners to pursue vocational and technical instruction.

"Many parents and candidates themselves will most likely be aiming for university education. It is indeed a commendable goal. However, I wish to encourage the candidates to take up vocational education." 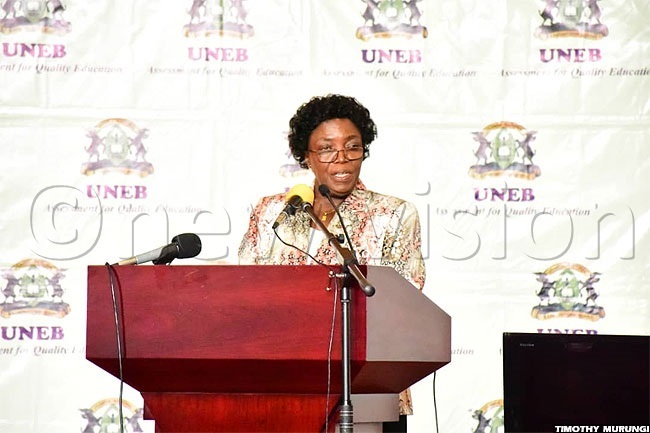 From the exams conducted "smoothly despite challenges of weather" from November 11 to December 2 last year, it turns out that although performance was better than in 2018, the interest in science disciplines remained low.

For females, the figure is even less than 10%," said UNEB chairperson Prof. Mary Okwakol.

She said this "persistent trend" must be addressed urgently.

Another spot of bother is Biology, whose poor performance Okwakol said "continues to be a cause of concern".

In the last four years, less than 50% of the candidates obtained passes at principal level. The performance in 2019 has been better than in previous years and hopefully this will continue.

"This has been reducing over the last five years," added Odongo. 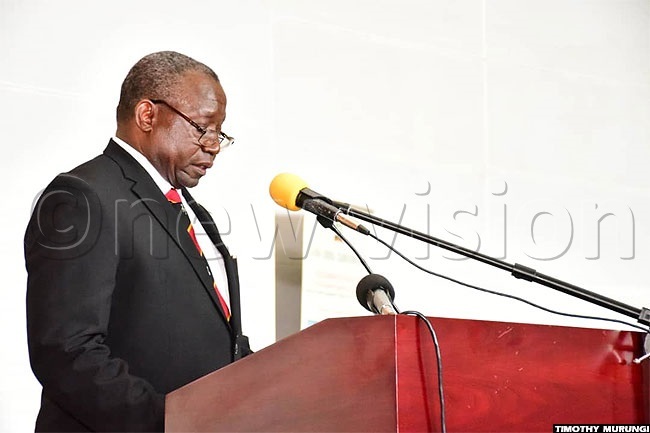 According to Odongo, the gap between males and females sitting the UACE exams is "still wide".

There were as many as 205 special needs candidates last year, up from the 177 of 2018. The blind candidates were given Braille and the deaf candidates had a sign language interpreter. 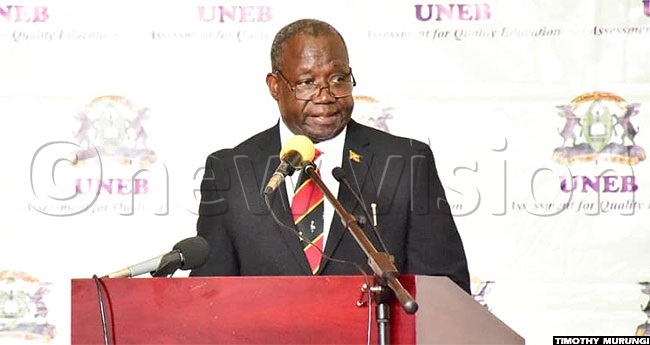 Last year's PLE and UCE exams had the boys beat the girls. For UACE, however, the tables turned. Proportionally, female candidates, although fewer, did better than their male counterparts at all levels.

In terms of percentages, the girls performed better than the boys at the principal level pass, which is A-E, in the humanities (arts), Mathematics, Physics and Agriculture.

The male candidates, though, were better in Chemistry, Biology, Art and General Paper.

Remember that these four subjects are compulsory at O'Level. 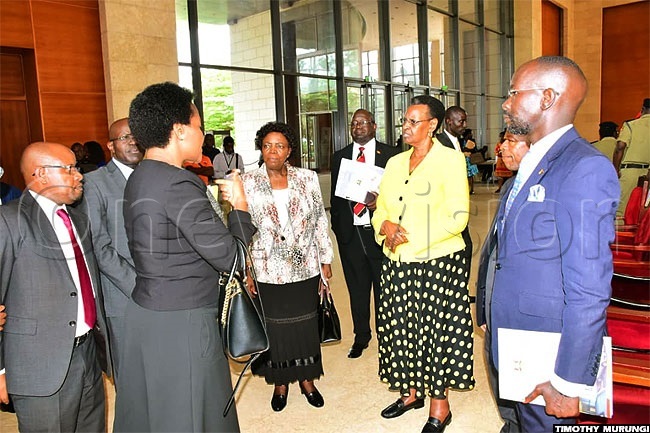 Education ministry and UNEB officials at the OPM on Thursday

UNEB has withheld the results of 126 candidates who sat from 26 centres.

So what were the common forms of examination breaches?

External assistance, subsitution of scripts, smuggling of unauthorized material into the examination room, and impersonation.

"Principal Mathematics, Biology and Chemistry were the subjects mainly affected. The affected candidates will be accorded a fair hearing by the Board, before a final verdict is made," said Odongo.

Meanwhile, UNEB is about to kick off registration exercice for candidates for the 2020 exams, and Prof. Okwakol was keen to remind the nation of the registration fees, which she said are the same as last year's.

UNEB intends to send a circular confirming these fees to all examination centres, CAOs and district officials.

Okwakol talked of how some centres have previously asked parents to pay double or triple the set amounts for registration.

"These charges (sh120,000 for PLE and over sh250,000 for UCE and UACE) have been misrepresented as 'UNEB examination fees'. The purported charges are illegal," she said.

"Heads of examination centres are warned against these distortions."

Encroachers on national parks must be evicted

We knew mudslides would happen in Bududa, why didn''t we prepare?