Mindset change is a key element in the success of not only this project but in the general Uganda economic development equation.

Mindset change is a key element in the success of not only this project but in the general Uganda economic development equation.

Parish chiefs and local district leaders after the training on how best to promote the model. Photos by Prossy Nandudu

Farmers in the districts of Mpigi and Mityana have embarked on a community development program in a bid to increase agriculture production, increase household incomes and improve there welfare.

The initiative is part of the South Koreas' Saemaul Undong or Villages movement model, whose aim is to demonstrate to Ugandan communities, that working together promotes inclusive and sustainable development.

One of the sectors that the project is looking at is increasing agricultural production, which the Byung-Kyoo Ha, the ambassador of the Republic of Korea to Uganda said has been neglected by especially young people in villages, yet the country has great potential in agriculture due to the availability of land, water, and conducive environment.

To help Uganda realize it's potential, Ha says the Village model that transformed Korea in the early 1970s, will first take participating communities through mindset change for them to appreciate opportunities around them.

"I would like to highlight that mindset change is a key element in the success of not only this project but in the general Uganda economic development equation. I commend the Government of Uganda for it's efforts, as is evident in the National Development Plan, to change the mindset in order to empower families, communities, and citizens to embrace national values," said Ha.

Ha said the initiative will improve the quality of life through inclusive and sustainable rural development in the target communities. 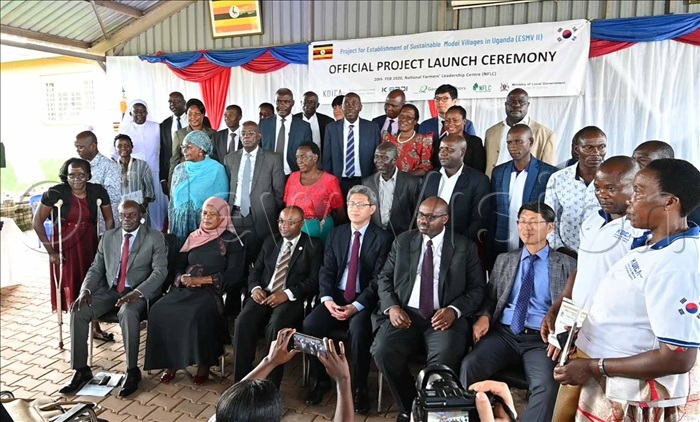 At the launch of the project  in Kampiringisa

He made the remarks during the launch of the second phase of the Establishment of Sustainable Model Villages, at the National Farmers Leadership Center in Kampiringisa, in Mpigi district.

He added that the project will be implemented by the ministry of local government through it's sixth pillar of decentralization, which is the Local Economic Development (LED), with a bias on agriculture at the Parish level.

The Assistant Commissioner in the ministry of local government, in charge of LED, Charles Oleny Ojok added that under LED, which is in line with the Village modal, households will be  encouraged to identify there economic potential from the assets or household or items in the community in there possessions, and than look for partners for support

"So  Led as a policy and later as a strategy, is looking at a partnership approach, where the community will have to work with local government, private sector, to address a challenge using the using locally available resources," said Ojok.

He further explained that the Korea International Cooperation Agency (KOICA) in partnership with the Ministry of Local Government (MoLG) have been implementing the pilot Project since  2015 in Mpigi which demonstrated the Korean Saemaul Undong as a successful model for inclusive and sustainable community development.

The project that is being funded by KOICA (5.9 Million USD) and the Government of Uganda (1.5 Million USD) will now lead to the establishment of Sustainable Model Villages (ESMV II) in the two districts.

And the project will focus on increasing household incomes, the establishment of Parish and Community Action Plans, Capacity building for Government officials,  gender mainstreaming among others, added a statement from  Ha.