Arsenal's Spanish head coach Mikel Arteta applauds at the end of the English Premier League football match between Arsenal and Everton at the Emirates Stadium in London on February 23, 2020. (Photo by Tolga AKMEN / AFP)

Mikel Arteta admitted Pierre-Emerick Aubameyang has erased any doubts about his commitment after Arsenal's captain led by example with a double in their 3-2 win against Everton on Sunday.

But, recovering from the wreckage of the Unai Emery era, their revival under Arteta is gathering pace.

Rocked by Dominic Calvert-Lewin's first-minute goal at the Emirates Stadium, Arsenal equalised through Eddie Nketiah and took the lead thanks to Aubameyang.

Richarlison levelled for Everton to cap a dramatic first half, but Gabon striker Aubameyang had the final word seconds after the break. 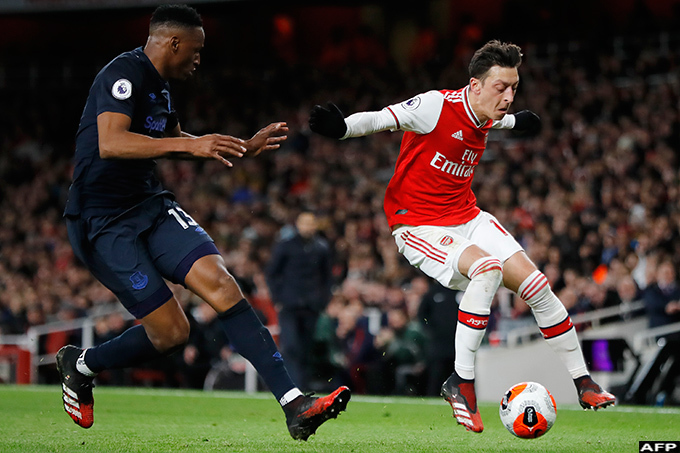 Gunners boss Arteta revealed he was not convinced about Aubameyang's mentality before he took charge, but watching his skipper tracking back to help defend in the closing stages won over the Spaniard.

"Before I took over I had my questions about him but he showed his commitment. I wanted him to show if he wanted to do it and do it physically," Arteta said.

"I'm so happy with him. He is scoring important goals and as a captain, he is giving a great example to everyone else with the way he is working defensively."

With second-placed Manchester City banned from European competitions for the next two years, as it stands finishing fifth could secure Champions League action pending the result of City's appeal to the Court of Arbitration for Sport.

There is a growing belief at Arsenal that they could take advantage of the punishment for Arteta's former club.

The Gunners are now unbeaten in their last 10 games in all competitions, including seven without defeat in the league after a second successive victory. 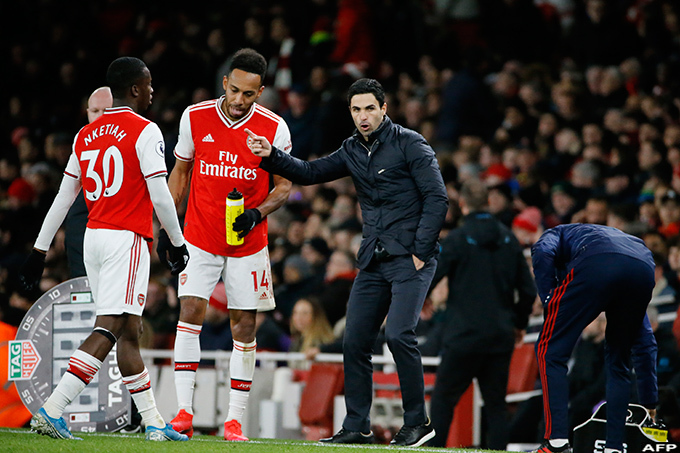 "I'm really pleased with the performance. It's not easy to play three times in seven days, we got back late from Greece, and then to concede an early goal as well," Arteta said.

"That asks questions of you. The team reacted really well. This is the reaction I am hoping for when we face disappointment. It's the best week since I've been here. "

Qualifying for the Champions League would be a major boost to Arsenal's hopes of keeping Aubameyang, who has been linked with a move to Barcelona or Inter Milan.

Arteta acknowledged Aubameyang has not found it easy to cope with Arsenal's reduced status since he arrived from Borussia Dortmund and he hopes a surge up the table will show the club's potential.

"They are completely right to want him because he is a superb player. It's right that big teams like him. Hopefully, we can convince him this is the right place to be," Arteta said of the transfer talk.

"I think it's been tough for him because he has big expectations. He wants to play in the biggest competitions and with the best players. We have to help him do that. He needs to feel fulfilled."

Everton's first defeat in six league games was a frustration for boss Carlo Ancelotti given their sloppy defending.

"We conceded too easily. The first goal we were not in position defensively. The second and third were easy mistakes. What can I say?

"We cannot be satisfied with this. To win at a top team you have to defend well. I don't know if it is a problem of mentality. We have to work on the balance of the team."