Tumuhairwe fused hardwork, financial discipline and self-belief as he rose from being an average village trader to an accomplished businessman in Kampala.

Tumuhairwe fused hardwork, financial discipline and self-belief as he rose from being an average village trader to an accomplished businessman in Kampala.

"I sold one of my father's cows on his request at sh500,000, which I used as my startup capital. I dealt in legumes, like beans and peas"

He used to walk on foot with merchandise on his head to make ends meet, as a petty trader. Gradually, he charted his way from a rural village in Bushenyi to a successful entrepreneur.

After completing A'level, Tumuhairwe did not join university. He did not get university admission grade.

He joined Uganda College of Commerce for a diploma in Business Administration. "Most of the students who didn't make it on government scholarship were absorbed by other tertiary institutions and it was no different for me," he says.

With a diploma, Tumuhairwe went on a search for a job. However, getting a job turned out to be a wild goose chase. Instead, of resigning to fate, he started petty trade in his village. His capital was a cow from his father, which he sold and got sh500,000.

"I sold one of my father's cows on his request at sh500,000, which I used as my startup capital. I began by dealing in legumes, like beans and peas, which I used to carry on my head to nearby trading centres," Tumuhairwe says.

However, it was this experience that laid the foundation of his current business status as a billionaire. After some time, he graduated to transporting the merchandise on lorry from Bushenyi to Kampala. With other traders, they used to travel during the night, perched on top of the truck, enduring long nights of coldness.

Despite all the hardships involved, he fused hardwork, financial discipline and self-belief as he rose from being an average village trader to an accomplished businessman in Kampala.

Working as a salesman in Kampala

In 1997, Tumuhairwe got a job at Watts International, a debt collection company, where he worked as a salesman. The number of his clients determined his payment.

"Although I had to walk on foot searching for clients, the experience was far much better than travelling on top of lorries on cold rainy nights," he says. Tumuhairwe says his previous experience had given him exceptional marketing skills, which he used to get more clients for his company.

He did marketing for the company and his earnings rose to a substantial level. It was around that time that Tumuhairwe used his savings to set up a retail shop in the city suburb of Nakulabye dealing in general merchandise.

The business thrived, so was his performance at work. At that time, he had married his wife; Kate Tumuhairwe, whom he describes as a strong pillar in the family and his entrepreneurship journey.

"My wife has always been supportive. For instance, when I told her to sell off our first car and invest the money in buying property, she did not object," he says.

In 2001, an opportunity beckoned and it jump-started Tumuhairwe to another level.

One of his friends informed him about three commercial units on sale in Kinawataka, Mbuya a Kampala suburb. With the encouragement of the wife, he took a step of faith and sold his first car and, the retail business to acquire the premises, which were worth sh10m.

"Fortunately, by 2003 I was able to acquire the commercial premises after paying in instalments," he says.

Using his savings, he opened up a hardware shop in one of his three commercial units in Kinawataka and his wife run it. Through hardwork and sacrifice, the business prospered.

He says above many things, it was the culture of savings that he learnt quite early that helped him to advance in business.

"I learnt the culture of saving, as soon as I started business. Quite often, I would save my money," he explains.

In 2004, Tumuhairwe acquired his first loan of sh5m from one of the banks, which he used to enlarge his hardware business. Two years later, he felt he had hit the ceiling and he yearned for something more different.

In 2006, he ventured into real estate business, which subsequently became his strongest financial arm.

"I started by buying and reselling small plots of land. For instance, I would buy a small plot and, after some time resell it at a higher price," he says.

The real estate business was just gaining momentum at the time.

Coming from the background of a trader, salesman and hardware business, he knew the kind of business skills needed to flourish.

"I would buy a plot at Nabusugwe Hill, Namugongo-Ssonde, in Mukono district and then subdivide it into small plots before reselling them again at a profit," he notes.

It was around that time that he flirted with pursuing his dream, studying a law course at Makerere University. While still in his debt collecting business, he met lawyers who ignited his childhood passion of becoming a lawyer, he enrolled for it and graduated in 2010.

Briefly, he went into a partnership with a local construction company, but the partnership did not work out. "My estate company started employing people who would handle business, especially whenever I was busy with my law course," he says. 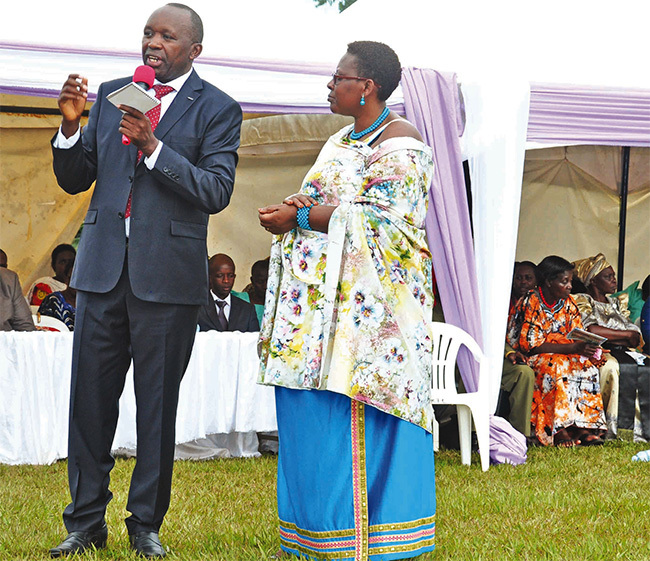 The idea to set up a school

By 2010, Tumuhairwe had accumulated good money from the business of buying and reselling land. Using proceeds from this business, he bought four acres of land in Sonde, at sh200m.

"The real estate business helped me to acquire the land. Initially, I thought I would resell it, but I did not. Instead, I kept on enlarging it," he explains. In 2014, Tumuhairwe had an experience that had a direct influence on how he was going to use his vast land for educational purposes.

"I took my daughter to get a school and she was turned down because the school was full, yet there were many schools in the neighbourhood," Tumuhairwe says.

From that experience, he discovered there was a need in the community. "It was that experience that sparked me to venture into the school business," he says.

Tumuhairwe thought if he started a school with quality education, he would be able to help parents who needed to enroll their children.

Using the money he got from real estate business, particularly, after selling off so many plots he had acquired at the time, he started constructing in 2014.

"The good thing with real estate business is that land is a fixed asset and the value appreciates fast. For instance, we used to buy a small piece of land and the profit margin doubles from the purchase price. That is how we managed to finance the construction process," he explains.

Building the school facilities was not a challenge, but his biggest challenge came in 2016 when he opened the school to the public.

"We had recruited competent staff and our school complex was first class, but we lacked the pupils to occupy the beautiful structures. So we had to embark on massive advertisement," he recalls.

With his wife and the recruited staff, they moved on foot houseto- house across neighbouring communities advertising the school, while pleading with parents to trust them with their children for quality education.

"At some point, I lost confidence because I was not sure if the school was going to ever kick-off," he admits. Luckily, the first term he got 14 pupils and by the end of the first year the school had 65 pupils in the lower classes (from baby class to Primary Four). It was not easy because the operational costs were high. For instance, we could pay a full salary to a teacher who taught one or two pupils," he says

By the end of 2016, there was glimmer of light of the school progress. "Our teaching staff had done a remarkable job in terms of teaching, feeding and general care of the 65 children, which boasted the parent's confidence in our school. The pioneer parents started convincing other parents to bring their children for the following year's enrollment," he recalls

In 2017, other parents responded, as the school experienced a sudden breakthrough with its enrollment shooting from 65 to 166 pupils.

From that time, the school never looked back in terms of service delivery and academic excellence. By of last year, the school's population  was close to 500 pupils with 2  teaching staff and 23 support staff.

Tumuhairwe was born in 1969 in Kyangyenyi, Sheema district in greater Bushenyi. He grew up in a humble, but God-fearing family.

His father, the late Geresomu Kigambe, was a sub-county chief, ahead of laity at Karyango Church of Uganda. His mother, Eva Kigambe was a housewife. He is the eighth born in a family of 10, five boys and five girls. Tumuhairwe attended Kajunju Primary School, then to Kyabugimbi S.S for O'level education. He completed his A'level at Kitagata S.S in 1993.

Tumuhairwe says he was not inspired by the high-profit margins while investing in school, he was purely service driven. The desire to provide quality education was our inspiring drive.

"We believe when you provide the best services, then the services you offer will act as your marketing tool." He adds that the school model of working directly with parents has worked in the school's favour because the parents market the school.

The returns on the investment are still far below the massive capital that was put in school, and also the school is operating at only 40% of its enrollment capacity.

Tumuhairwe believes the journey he has so far travelled in business has not been without learning curves.

"I have learnt that if you are investing in any venture you have to be calculative because some business enterprises need a lot of patience. I have also learnt that financing a business project on loan can be challenging in case the business does not pick up in time, the lender will come after your business.