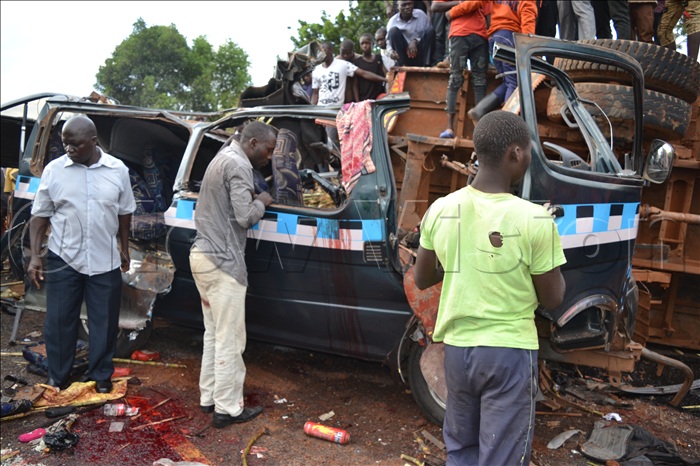 Fifteen people have been confirmed dead in a nasty accident that occurred along the newly-constructed Busia-Namayingo-Musita highway this morning.

According to the Busoga East Police Spokesperson, James Mubi, the 15 perished on the spot after a taxi they were traveling in rammed into a stationary Tata lorry that was carrying sugarcane at around 4:00am.

"None of the taxi occupants survived. All the bodies of the deceased were taken to Mayuge health Centre IV for post mortem examination," Mubi said. 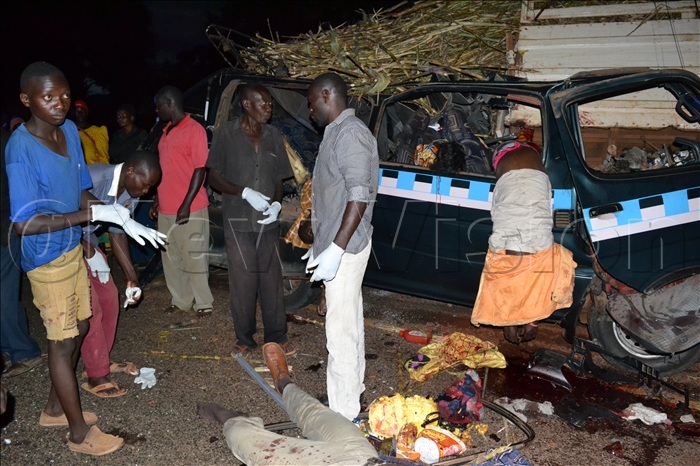 The taxi wreckage and the sugarcane truck were towed to Mayuge police station.

Asked about the cause of the accident, Mubi said the sugarcane truck was left parked at the roadside by the driver who did not put up any warning signs. Mubi added that the driver of the taxi was also speeding and he is said to have been dosing.

"We are looking for the driver of the sugarcane truck, its owner and the owner of the sugarcane to answer some questions. They are suspects because we warned them against parking these trucks on the roadside. We told them that if there is a mechanical breakdown, they should inform us and we get a breakdown to tow the truck away. But there was no communication to us," Mubi noted.

Mubi was able to identify some of the victims as; Christine Were from Namutumba, Zaina Nabirye from Bugiri and Michael Musinguzi from Rubaga division in Kampala.

The police publicist said relatives of the deceased had already started flocking Mayuge Health Centre IV, especially those from within Mayuge, to pick bodies of their loved ones. 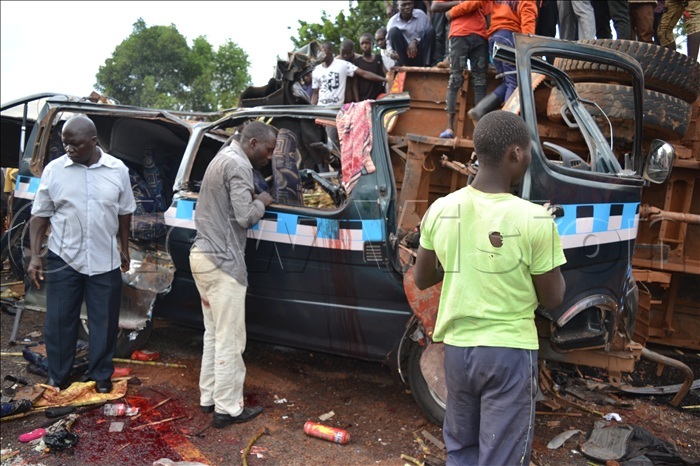 Mubi said similar accidents caused by stationary sugarcane trucks have happened in the region before, citing the in Iganga accident in which one person died and 15 were left nursing injuries five days ago.

In the accident that occurred last Saturday along the Iganga-Jinja highway, Habib Sowedi, a headteacher of Namwiwa Primary School in Kaliro district, died on the spot.

The 15 suvivors were admitted at Iganga Hospital in critical condition.

The accident that involved three vehicles and a boda boda, occurred after a sugarcane truck veered off its course and fell on two passenger vehicles. 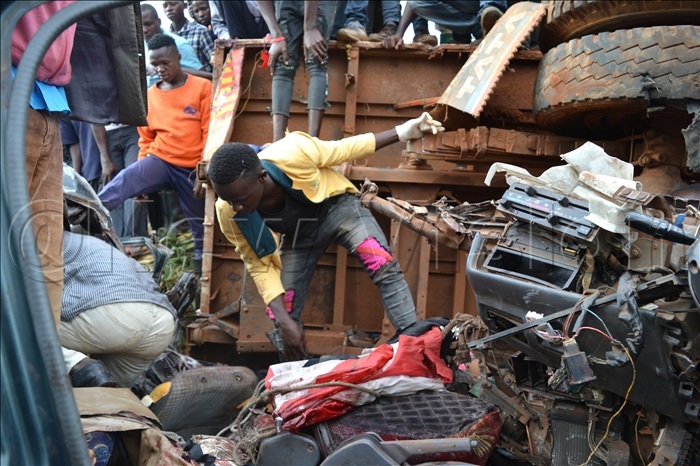 "The Iganga accident also happened resulting from a sugarcane truck," Mubi said before he warned drivers to always have enough rest before embarking on long journeys. "Let drivers consider their lives as a precious thing."

In August 2014, another 12 people died in a road accident involving three vehicles in Mayuge district. The accident occurred at about 11pm at Musita town along the Iganga-Jinja highway when a trailer rammed into a taxi heading to Mbale.

The 12 died on the spot, while four sustained injuries and were taken to Iganga hospital. According to Police, the accident was caused by a sugarcane truck which had developed mechanical problems, and it was left parked in the middle of the road without any warning signs.