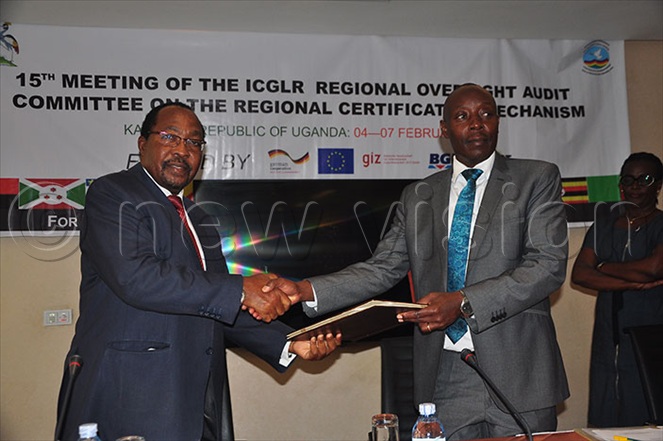 Uganda has signed an agreement with the International Conference on the Great Lakes Region (ICGLR) and the German Federal Institute for Geosciences and Natural Resources (BGR), to adopt the certification mechanism and audit of minerals termed as ‘blood' or ‘conflict' minerals.

Robert Kasande, the permanent secretary at the ministry of energy and mineral development signed the agreement after a four-day meeting of the ICGLR Audit committee in Kampala.

The agreement is good news to miners and mineral exporters in Uganda who have not been exporting these minerals legally due to the absence of the certification mechanism.

An industrial, small scale or artisanal miner possessing the certificate shows that the mineral was conflict or blood-free and can be sold at a good price on international markets. The minerals are termed as 3Ts and G (Tin, Tungsten, and Tantalum) and Gold.

Kasande expressed Uganda's commitment to implement the regional initiative. "The country has developed a national work plan and roadmap for implementation of regional certification mechanism for the 3Ts and G.

Mineral certification has three components, mine site inspection, chain of custody (traceability) and certification (issuance of certificates). On each of the components Uganda has made progress," Kasande said.

He added BGR and Canada based IMPACT, the two technical and financial partners for ICGLR are helping set up the Uganda-ICGLR Mineral Tracking and Certification Unit. The unit will be based at the Directorate of Geological Survey and Mines, Entebbe.

Regional member states set up in 2010 the ICGLR Regional Certification Mechanism on the Fight against illegal Exploitation of Natural Resources to issue certificates, audit mining companies and mineral exporters for the 3Ts and G.

BGR is a German-based geosciences consulting institution for the German federal government.

The ICGLR regional certification mechanism came out of the ICGLR Pact signed by regional heads of state in 2004 to promote security, stability and development in the Great Lakes Region.

Ambassador Ambeyi Ligabo, director democracy and good governance programme at the ICGLR said in that field trip they visited 3T Mining Uganda, a tin mining company based in Wakiso district.

Ligabo said this was one of the companies waiting to be given the certificate and to be audited to enable them export tin.

Luhaka explained that miners including artisanal and industrial miners of 3Ts and G will apply to be certified and audited. He said companies that comply with the requirements will be able to sell their minerals at good prices anywhere in the world.

President Yoweri Museveni ratified the ICGLR Act in 2018 which enables Uganda to implement the regional certification and audit of conflict/blood minerals.