One dead, 30 injured in Iganga accident

According to traffic police statistics, 19 people have in the past two years perished at the same spot with the majority being boda boda cyclists and their passengers

One of the survivors getting out of the wreckage

According to traffic police statistics, 19 people have in the past two years perished at the same spot with the majority being boda boda cyclists and their passengers

IGANGA-One person died instantly while 30 others were rushed to hospital in critical condition after a trailer loaded with sugarcane rammed into a taxi at Walugogo trading center 3kms along the Iganga-Jinja highway on Saturday.

The accident happened at around 6.30 pm. The deceased Henry Isabirye,  a taxi driver died instantly after a trailer that was loaded with sugarcane from Iganga heading to Jinja rammed into a taxi that was parked along the roadside.

The driver attempted to avoid knocking a boda boda cyclist who crossed to the opposite side of the road without alerting other road users.

The first taxi that was heading towards Jinja from Iganga had parked alongside the road in a bid to pick a passenger.

An eyewitness, Mohamed Kintu blamed the boda boda cyclist for crossing to the opposite side of the road without alerting other road users.

Kintu said motorists always speed at that spot yet the area is sloppy and narrow.

Two other taxis registration number UAL 048V and UAY 862 W that were also heading towards the direction of Iganga from Jinja moments later rammed into the trailer that had fallen onto the first taxi.

The inured in the second taxis sustained broken legs, hands and developed deep cuts all over their bodies.

Some of the injured currently admitted at Iganga main hospital have been identified as Sande Otto, Godfrey Kadoogo, Fahad Yakuti, Yasin

Bogere a businessman operating in Iganga municipality, Badru Izimba, Ronald Isiko, Mohamed Wabwire and a one Bonny a resident of Bugiri municipality.

Walugogo trading center has in the past few years become a black spot with boda boda cyclists mainly being affected. 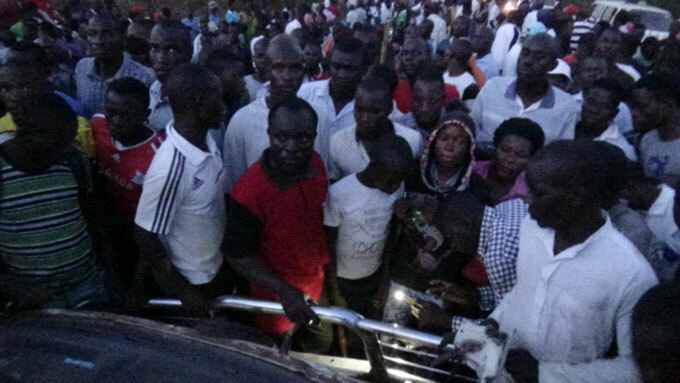 According to traffic police statistics, 19 people have in the past two years perished at the same spot with the majority being boda boda cyclists and their passengers who cross over to join the road heading to Luuka district.

The chairman Iganga Hospital management committee, Sam Obira urged government to elevate the facility to a regional referral in order for it to accommodate the big number of patients, especially during emergencies.

"At times patients are forced to sleep on mats just because the beds are not enough," he said. 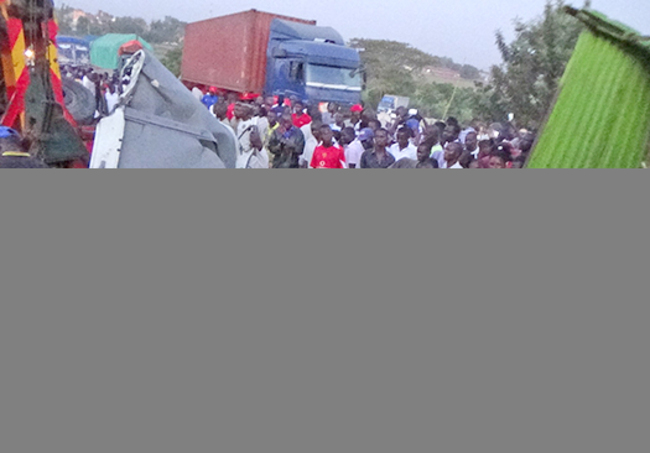 The Resident District Commissioner, Iganga, Eva Kwesiga urged the Uganda National Roads Authority to install humps at the trading center to reduce accidents at the spot.

Kwesiga attributed the increase in the number of accidents at the spot to over speeding. 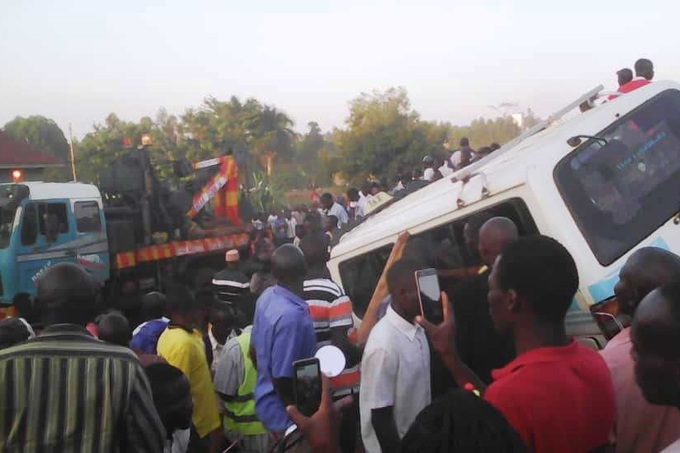 The district police commander, Iganga, Willy Ndawula said Police was hunting for the driver of the trailer who fled after the accident.

He said the driver is to answer charges of murder as a result of reckless driving. He attributed the accident to recklessness on the part of the boda boda cyclist and the trailer driver believed to have been over speeding.

Ndawula urged motorists to always drive within the recommended speed limits and to observe traffic regulations to avoid similar incidents.

Traffic along the route was paralysed for over five hours as Police tried to put away the wreckage of the trailer and three taxis that had been involved in the accident.