ROOT campaign: Warming up to run for envir...
Next Story

“It is still in its infant stage, but we hope to further it such that in the future, it becomes an issue of policy."

Minister Obua visited the national boxing team at their training camp inside Luzira Prison on Wednesday. (Credit: Johnson Were)

“It is still in its infant stage, but we hope to further it such that in the future, it becomes an issue of policy."

State Minister for Sports Hamson Obua has promised to push for the monthly wages of athletes be made a policy ahead of the 2020 Summer Olympics that are scheduled for August this year.

The stipend that is paid by the Office of the President from the Welfare Fund initiated in 2013 is rewarded according to the ranking of an individual's performance.

A medalist receives sh5m for gold, sh3m for silver and sh1m for bronze. Obua desires this to be a policy.

"We have a written commitment, which is now a policy on rewarding our excelling athletes," he said.

"I share this dream with the Ministry of Education and Sports for this issue to become a policy.

"It is still in its infant stage, but we hope to further it such that in the future, it becomes an issue of policy and no longer a goodwill gesture from the President," Obua added. 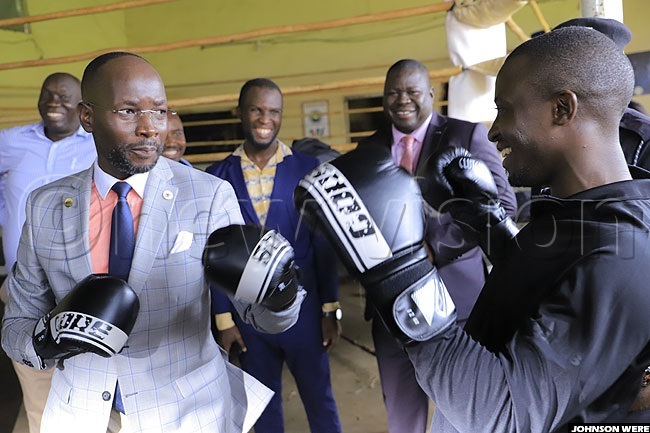 This comes after The Bombers team that won three silver medals and one gold at the All Africa Games in Morocco last year raised the concern of not receiving a single penny from the President's office.

The general secretary of the National Council of Sports, Patrick Ogwel, said that standard procedure had been followed on their part, and that it was left to State House to do its part.

"We submitted the names of the athletes to State House. We fulfilled our duty as NCS.  All you can do now is wait," he said.

Minister Obua was visiting the Bombers's at their training camp inside Luzira Prison.

During the tour, the minister was briefed on the issues affecting the sport and he pledged to have them addressed.

He urged the athletes to remain focused amid the difficulties they are undergoing, and aim for top honours in Dakar, Senegal where the African boxing qualifiers for the Olympic Games will be held.

In pictures | How the FUBA Awards 2020 unfolded

In pictures | How the FUBA Awards 2020 unfolded