The beneficiaries are farmers of Rushayumbe village, Rutaraka Parish and Rwentuha Town council, in Kyegegwa district.

Eng. John Twinomujuni explaining to the Kyegegwa district how the irrigation scheme works.Photo by Adolf Ayoreka

The beneficiaries are farmers of Rushayumbe village, Rutaraka Parish and Rwentuha Town council, in Kyegegwa district.

AGRICULTURE
KYEGEGWA - The Government, through the water and environment ministry under the department of water for production, has handed over sh430m for small scale irrigation schemes to farmers to boost production.
The beneficiaries are farmers of Rushayumbe village, Rutaraka Parish and Rwentuha Town council, in Kyegegwa district, who are predominantly growers of maize, tomatoes, watermelons and cabbages.
Eng. John Twinomujuni, the assistant commissioner in-charge of water for production in the environment ministry, said under the national irrigation policy, the ministry is mandated to implement small scale irrigation schemes. 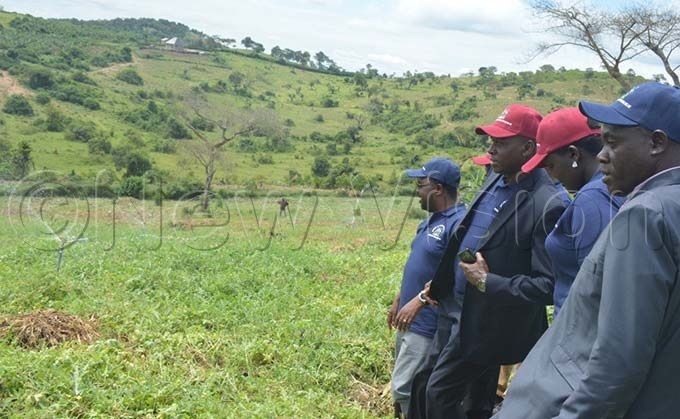 He said the scheme is geared towards fighting poverty in the country by allowing farmers to plant crops throughout the year and increase production.

He noted that this is why the Government is establishing the scheme, such that model farmers can replicate the type of scheme as a business to easily realise the capital return on investment.
He said Kyegegwa district will be given three more irrigation schemes to help farmers get water for production.
"Over 70 schemes are under construction, over 130 of them are being designed and 77 have been commissioned," Twinomujuni said.
"So far, watermelons are being harvested and each is being sold at sh6,000. Tomatoes are also being harvested. Therefore, this project is expected to achieve its objective and the production per acre is going to be four-folds. If one was getting sh1m in an acre, now that person is going to get sh4m."
He noted that the scheme is multipurpose since it also has watering units for cows.
Twinomujuni made the remarks on January 29, during the commissioning of Kyegegwa district irrigation project.
He warned people against politicising the project, saying: "We are aware of the people who are trying to spread falsehoods about the project, saying the Government wants to take their land, this is not true. Members of the community willingly donate their land for the demonstration projects."
Steven Oloya, the district Chief Administrative Officer, said Kyegegwa is one of the water-stressed districts in the Rwenzori region and that access to safe water is low.
He said such interventions of irrigation by the environment ministry will help to mitigate the effects of climate and will improve productivity.
"Before we tried using the gravity flow scheme, which is expensive and motorizing some water sources, however, some areas were too rocky and we could not drill boreholes," Oloya said, adding that people would move long distances to get safe water for domestic use and crop production.
Julius Kalisa, a farmer of fruits in Kyegegwa, said before the scheme was introduced, they could only plant two seasons in a year.
"In the dry season, we would make losses. We would harvest about 20 basins of tomatoes per acre. However, with the scheme, we now have constant production throughout the year," Kalisa said.
What residents say
Verentina Mushabe Yesu
we got a relief when this project was set up, it has helped us to diversify production because we were used to only planting maize and it would give us low incomes, for example in quarter an acre of maize one would get like shs80,000 but when we started planting tomatoes and using irrigation methods we are now realizing much profits and harvests are continuous.
Justine Mbabazi
Prior, we would walk long distances like 3-4 kilometers searching for water for domestic use but when this scheme was put in place, it serves two purposes; we get water to irrigate our crops even for home consumption. Those who are near the scheme have benefited much and we want if the government can establish more schemes to benefits more farmers, would be better.
Johnson Niwamanya
Here in Kyaka we are predominantly maize growers and to harvest them it takes you 8months so to wait for all those months without income would be a struggle but when we started growing foods like tomatoes, our income have increased. Forexmple in quarter an acre one can get shs6m.