President Yoweri Museveni has urged the people of Kisoro district to desist from land fragmentation if they are to get the best out of their land and overcome poverty.

"It is quite clear that this area has a problem of land shortage and thus most of you lack enough land to do constructive production and expansion of your ventures. I, however, implore you to find various ways of overcoming this challenge by utilising the little land you have productively," he said.

Museveni encouraged the residents to embrace poultry, fish farming as well as zero-grazing of dairy cows, onion growing, coffee and tea planting among other ventures that they deem possible on their small pieces of land.

The President was on Wednesday addressing hundreds of people who had gathered at Gatete playground in Murora sub-county on a wealth creation campaign in the district.

Murora sub-county led the entire country in voting for Museveni in the 2016 elections with 93% of the vote. Museveni hailed the locals for their profound support towards the NRM party which has seen it achieve a lot in Uganda.

"Thank you so much for supporting NRM and we can guarantee that your support is not in vain. When we took over power, electricity was only in Kasese. We then embarked on extending it to other places which have made it possible for areas including Kisoro to have this privilege. We have improved a lot on the roads, health sector, industries to mention but a few," said Museveni.

He said that the government was on the right track to bring development closer to its people but what was only left was up to the masses to find ways of overcoming household poverty.

Another war that Museveni said was fought the hardest way was the division of people based on religions. He reminded Ugandans that his government did a lot of sensitisation until such practices were fought completely.

"We kept reminding our people that the problems we face are general and they do not attack us based on our religious differences. In this we were able to ensure unity, peace and eventually steady development," he added. 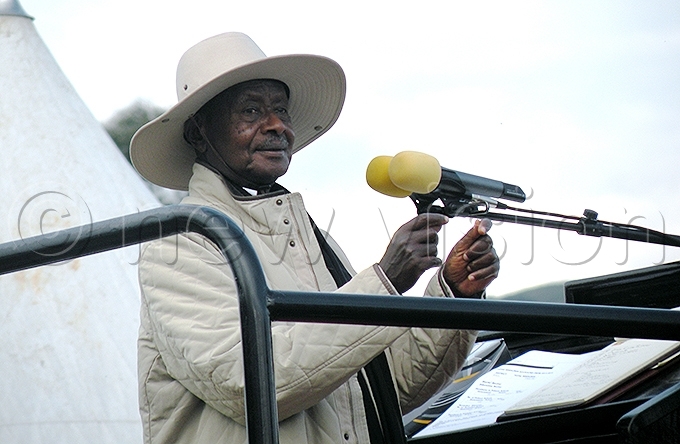 The President further encouraged locals in Kisoro which is a tourism hub in Uganda, to engage in ventures that will see them attain much from the existing tourism opportunities.

He said that if residents invest in hotels, transport, art and crafts, they could gather some income from tourists visiting the area.

Museveni added that the government is working around the clock to ensure that all tourism roads are fully upgraded to the most desirable level.

He expressed interest in establishing more industries in the area to help people benefit from their locally produced goods.

The President welcomed the idea of establishing the John Kale Karekyezi University in Kisoro in memory of his enormous contribution in the fight for Africa's independence.

He also promised to upgrade Nyakabande Airfield to a standard that will boost tourism in the area. 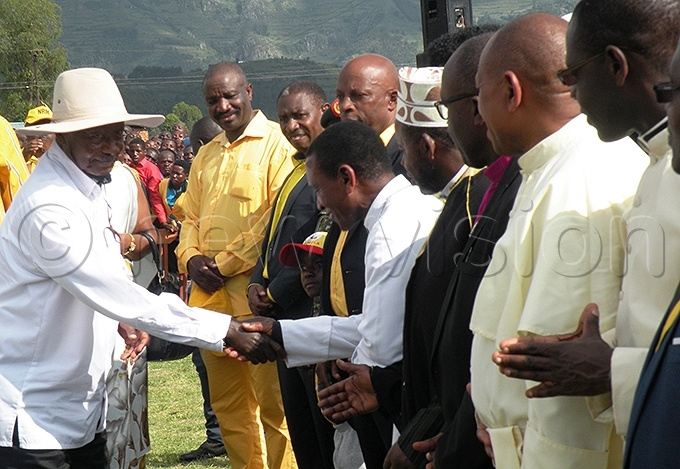 Kisoro LC5 chairman Abel Bizimana asked the government to speed up the creation of Bukimbiri Constituency which has been a regular demand especially by residents of Kirundo and Nyamwishenya sub-counties in Bufumbira North Constituency.

Bizimana said that President Museveni pledged to facilitate the process to create Bukimbiri Constituency during a public rally at Rubuguri Playground in 2015 but since then, residents have patiently waited in vain.

"These people love you so much and so they want you to make this possible and they multiply their love for you," he said.

Bizimana further asked for garbage collection vehicles that will ensure better sanitation in Kisoro Municipality and make the town more appealing to tourists visiting it.

The Kisoro Woman MP, Rose Kabagyenyi, called on the President to sit with his Rwandan counterpart, Paul Kagame, to resolve the ongoing border conflict as soon as possible.

"We have had a lot of losses since the border closed and we beg that our two leaders work out a solution to this sooner than later because we strongly need to revamp the relationship between our countries," she said.

17 dead: 'They shot people as they tried to flee'