The body of former state minister of defence in the Obote II government, Peter Otai, on Wednesday arrived at Entebbe International Airport.

Otai passed away in London on January 1 while in exile where he'd been since the Obote II regime was toppled by Gen. Tito Okello Lutwa in 1985.

He was also the leader of the Uganda People's Army (UPA), a rebel group that took up arms against the National Resistance Army (NRA) after it captured power in 1986 led by Yoweri Museveni. 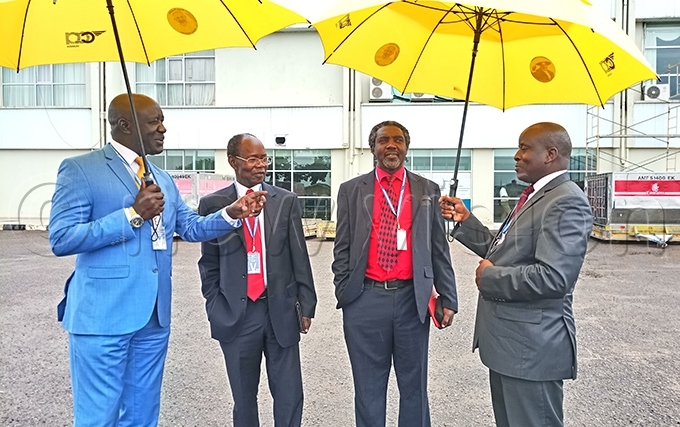 Minister Musa Ecweru (left) and UPC president James Akena were at the airport to witness the return of the remains. Photo by Francis Emorut

Close family members of Otai were also present at the airport to receive the body.

Present were Erlin Ibresk the sister to Otai's wife Margaret Otai, his brothers Simon Peter Orenge, Peter Otai and Tom Omongole among others.

The Police mounted a guard of honour while receiving the body of the former minister.

UPC members including James Akena the party president, Yona Kanyumusi, Moses Apiliga, Chris Rwakasisi all former ministers in the Obote II government and Aggrey Awori a UPC diehard before crossing to NRM, were all present.

The body was taken to Mengo Hospital and will be transported to Soroti on Thursday ahead of burial on February 1.