Reunion brings back emotions for Uganda's ...
Next Story

Memorial signage hangs near people mourning for former NBA star Kobe Bryant, who was killed in a helicopter crash in Calabasas, California, near Staples Center on January 26, 2020 in Los Angeles, California. AFP PHOTO

Like any other ardent basketball acolyte, NBA fan and erstwhile basketball player, I was crushed upon hearing of Kobe Bryant's death at the crack of dawn, today.

Bryant was a larger than life basketball icon, who made many people fall in love with the sport; on account of his relentless competitive drive and zeal to win. In the early days of his career, he made scoring in a basketball game look easy like shooting fish in a barrel but he was no easy act to follow.

BBC radio rang the knell of Bryant's demise in a helicopter crash in Calabasas Los Angeles as I was going through my daily early morning 100 push-ups regime. I was 56 pushups in and once I heard the sad news, it just put a huge damper on me that I could not continue. 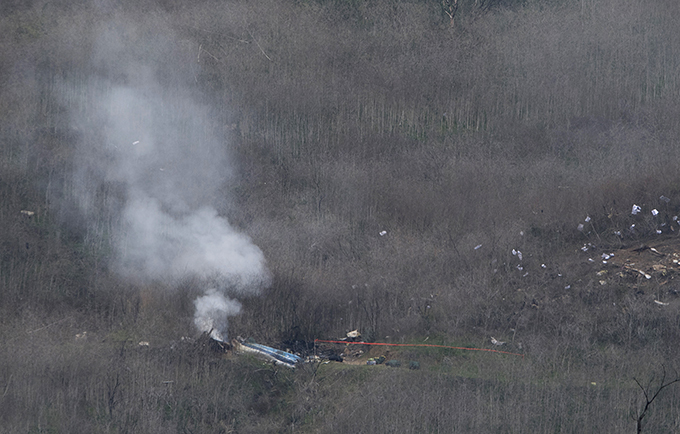 The fact that he died with Gianna Bryant-his 13-year-old daughter, just exacerbated the sadness. Gianna was a budding basketball player herself, who had dreams of playing in America's top women's basketball league-the WNBA.

Like many basketball acolytes across the globe, I am still in shock.
Upon hearing the news, my mind was cast back to the depressing day, last year, when the devastating news of my 17-year-old nephew's death reached me. Roy Madete was a student at St. Mary's College Kisubi (SMACK) and he also passed on unexpectedly. I was devastated beyond measure, just like I am today.

I did not know Bryant personally but because he was somebody my teammates and I really admired, venerated and looked up to, and because he was a very supportive family man and supporter of global projects aimed at popularizing the game of basketball, it just seemed as if we knew him.

The basketball world is beholden to Bryant. The glowing tributes that are still flowing in from players in the NBA, from Africa, Europe, Asia, etc; in the wake of his death speak to that fact.

The tributes have come from across the spectrum, including from prominent people like President Donald Trump, his Los Angeles teammate-Shaquille Oneal, from the National Catholic Register, among others.

In Uganda, there are glowing tributes on the Federation of Uganda Basketball Association Facebook page and on the page of the National Champions-the City Oilers. 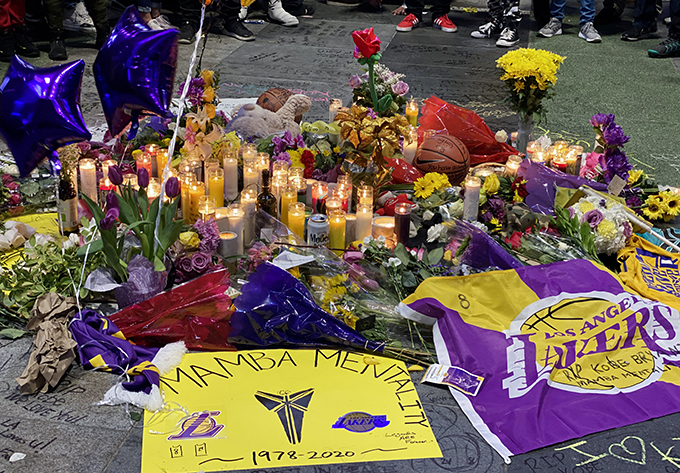 People gather on January 26, 2020 around a makeshift memorial in downtown Los Angeles as they pay tribute to former NBA and Los Angeles Lakers player Kobe Bryant who died in a helicopter crash near Los Angeles

One of my erstwhile teammates [Danny Miles] who I played the game with in High school, at University, and club level admired Kobe so much that he wore his number 8 and 24 jerseys, every time we trained and for good measure, he played Kobe's music every time we trained. Yes, Kobe did some music too.

Bryant was a joy to watch when he stepped on the basketball court. He wore his heart on his sleeve and brought down the house every time he played, whether it was in guarding opponents, shooting threes or dunking the ball on an offensive play. Many of my teammates mirrored their games on Bryant's game.

I was not the biggest fan of Bryant's team-the Los Angeles Lakers, like most of my friends, but there is no way, you could gloss over his peerless skills on the basketball court, even though, on occasion, he seemed selfish with the ball. 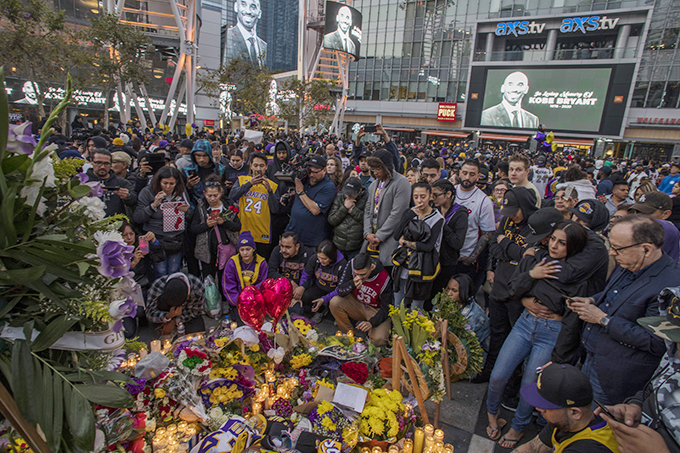 People gather around a makeshift memorial for former NBA and Los Angeles Lakers player Kobe Bryant after learning of his death, at LA Live plaza in front of Staples Center in Los Angeles on January 26, 2020

Bryant was, in many ways, basketball's poster Child after Michael Jordon's retirement. Though he had to deal with a lot of blowback and criticism, earlier on in his career, principally that he had mirrored his game, to that of Jordon, he, at length, carved out his niche and went on to win five NBA Championships with the Los Angeles Lakers and two gold medals for Team USA.

Bryant will be dearly missed by the world of Basketball and of course by his family. One can only imagine the grief, his wife is going through. May God strengthen her. Bryant inspired many across the globe to play the game with a passion.
In Abraham's bosom, he will still play with his daughter.

His death reminds us that tomorrow is not promised to any of us. In our own country, we dice with death every day, given our lifestyles, state of our roads, etc.
Bryant has gone the way of all flesh but his legacy as one of the greatest players to ever play the game of basketball will forever be illuminated.

Nkumba Marines not drowning just yet

University League off to a slow start

Divorce for pastors, marriage for Catholic clergy - a new normal?

Divorce for pastors, marriage for Catholic clergy - a new...