WHO probing if Chinese virus can spread be...
Next Story

A funeral programme is in place for Peter Otai, who served as Minister of State for Defence in the Obote II government and later engaged in subversive activities.

Peter Otai (right) at a reception in 1981. He served as a diplomat and minister in Obote's government. (New Vision archives)

A funeral programme is in place for Peter Otai, who served as Minister of State for Defence in the Obote II government and later engaged in subversive activities.

SOROTI - The family of former minister and Uganda People's Army (UPA) rebel leader Peter Iloot Otai have expressed gratitude to President Yoweri Museveni for accepting to have his body returned home and accorded a state funeral.

The interment is scheduled to be in his native Soroti district.

Otai left Uganda for the UK where he commanded rebellious activities against the then National Resistance Army (NRA) that assumed power in 1986 under the leadership of Museveni.

"We are grateful to President Yoweri Museveni for accepting the remains of our son be brought back for burial," said Michael Eroku, the zonal clan chairman of Irarak-Iderin in Soroti.

He died in the wee hours of January 2 in London, where he had lived since the overthrow of Obote's second regime.

After arrival at Entebbe, Otai's body will be taken to a funeral home in Kampala, then moved to Kololo Independence Grounds on Thursday. After there, it will be airlifted to Soroti for the burial ceremony.

Otai's clan has agreed he be laid to rest this Saturday at his ancestral home of Oderai village in Soroti sub-county.

Meanwhile, a funeral service was held in London for the Uganda community living there at Holy Trinity church Tulse Hill. 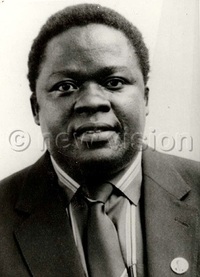 •  Otai was born on May 8, 1940, the second child of the late Titus Iloot and Bessi Asano of Oderai village, Soroti sub-county in Soroti district.

•  He then went to Busoga College, Mwiri for his O'level education and after excelling in Mwiri, he was admitted to King's College, Budo, for his A'level.

•  He was granted a scholarship to study at Reading University in the UK.

•  Otai married Margaret Ibreck on March 8, 1969 in London. They had three daughters together: Debbie, Joanna, Elizabeth.

•  He then served as minister of state for defence under the Milton Obote II government until the toppling of the regime in 1985.

•  Otai fled into exile in Kenya, before relocating to UK where he died at the age of 79.

The experience of tracking gorillas in Bwindi Forest