Over 200 to grace Liberation Day Chess
Next Story

Our vision is to merge true global citizenship with the game of football.

Our vision is to merge true global citizenship with the game of football.

Football is the Beautiful Game but when used as an avenue for global transformation it rises beyond mere aesthetics to a power out of this world. This is the case with the women's Global Goals World Cup, a wonderful initiative started in 2014 to promote the UN Sustainable Development Goals through a potent mix of sport, art and advocacy.

As CEO Afrika Sports Foundation Center and Host Global Goals World Cup East Africa 2020 revealed in this exclusive interview Mariam M. Mpaata - this drive has had a huge impact in its six years of existence and Kampala can brace itself for special day on March 8 2020. 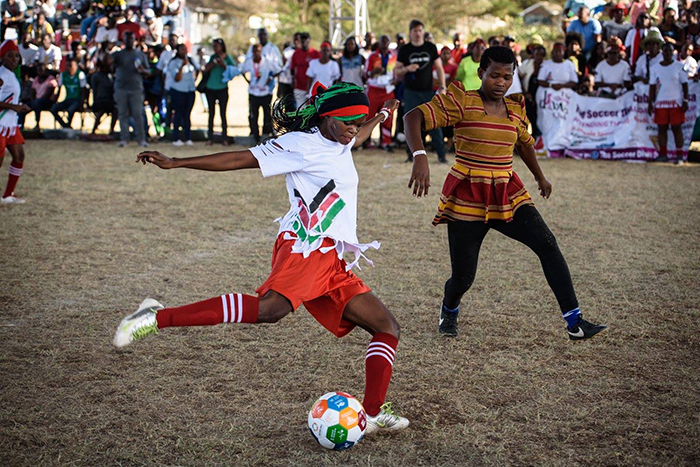 Qn: The Global Goals World Cup is a unique concept, how was it developed and how has it fared in its three years of existence?

We have created this new type of world cup to leverage the universal power of sport to excite and unite, and to direct that power towards realising the UN Sustainable Development Goals and continue the work we have done for women in football since 2004.

The Global Goals World Cup (GGWCup) is an open women's activist football tournament designed for women to expand the scope of a conventional sport event. We are comfortable at the intersection between sport, art, culture and activism.

Our vision is to merge true global citizenship with the game of football. Since 2016, we have hosted 14 tournaments across 5 continents together with local host partners. We hosted 4 Finals in New York City during the UN General Assembly Week / Global Goals Week in the third week of September. 4,120 women or 364 teams have undertaken more than 22,500 actions

Qn: Why is it a women's only tournament?

We love working with women and we truly believe that a group of women are the strongest activists. We also need to create a new and better story for women in sport. Most media only cover men's sport and we have very few sporting events for amateur women. Qn: What is your role in the Global goals world cup
I am the local host for the event and as a previous participate in both GGWCUP Nairobi 2017 and Johannesburg 2018, I am still overwhelmed by the idea that football changes the way we perceive life. I played as a goalkeeper in both events and so i tell women that football is a game for us too. We can use it to inspire younger talented girls, we can use the same to advocate for change. That is why I am passionate about this edition. My team and I are working hard to bring together Women from all of East Africa .

Qn: Only a fraction of the involved teams will be able to qualify for the GG World Cup Finals but what impression do you hope to leave with every woman who takes part in the event?

Qn: What can Ugandans expect from the first GGWCup event held in the country or put differently, why is it important for Ugandans to be a part of it?

Uganda being the host for the East Africa edition 2020, it's important for all of us to take steps for the world and each other. Creating the GGWCups with local partners like FUFA and KCCA FC helps us learn more about a country and share that with our global community.

As it is sports is a powerful tool that brings together nations and communities. Uganda is a force in the region for football and, therefore, introducing the game through mothers, sisters, grandmothers also gives them an even important role to give extra support to the upcoming talents because then they have an idea how powerful sports is.

Qn: The scoring system for the tournament is pretty intriguing. Could you shed more light on it?

When teams play in a GGWCup tournament, they get the chance to play under an alternative set of football rules, whereby the adaptations were designed to make social impact, creativity and community support as important as a team's football performance.

This four- point system has become a defining characteristic of the tournaments as it allows for a deeper integration of the sustainable development goals into football, leads to greater visibility and mobilization of crowds and aims to attract female players who might have been hesitant to sign up for and play in a normal football tournament. Four points are given after each game: For best activation for a Global Goal, Creative style, engaging the crowd and the actual football

Bugandaâ€™s good example: Use the law!