Sports development is top on the Government's agenda given the support extended to various national federations and teams.

In the 2017/18 financial year, the Government increased the sports budget by sh14.7b to 17.4b to facilitate talent development as well as support to national federations and teams.

This came after the Uganda Cranes participated in the Africa Cup of Nations (AFCON) tournament in Gabon in 2017 after 38 years of absence.

Uganda also qualified and participated in AFCON Egypt in July 2019 for the second consecutive time. President Yoweri Museveni also offered the Uganda Cranes a sh3.7b reward for advancing to the knockout stage of the African Cup of Nations.

Museveni promised more support for sports when resources allow. The She Cranes were also fully funded by the Government for their preparation and participation in the 2017/2018 Africa Netball Championship where Uganda emerged the winner.

When the She Cranes qualified for the World Netball Cup held in Liverpool in July, the Government supported the team with funds. The She Cranes emerged among the top seven.

Each player was given sh1m for their participation in the tournament, courtesy of the Minister of Education and Sports, Janet Kataaha Museveni. Following the excellent performance by the national side, the Government has continued to offer support despite the money not being enough. 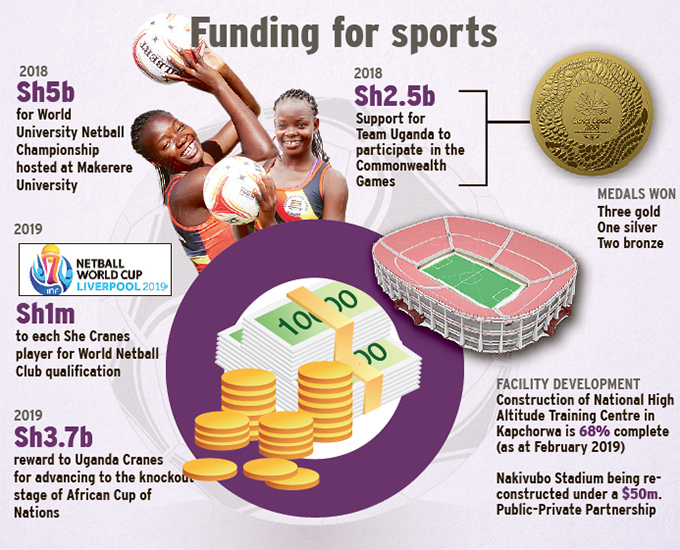 The facilities include a jogging track, artificial turf,  six-lane running tracks, one hostel block, site roads and parking. Construction on phase one works of the facility is expected to be completed by January 2020. Nakivubo Stadium is undergoing re-construction under a public-private partnership arrangement with Ham Enterprises, estimated at $50m (sh1.5b).

Moses Magogo, the then FUFA president, expressed gratitude for the support towards the national teams and asked for more."The Government is doing great in appreciating the teams, which is motivating the players. The support towards improvement of sports facilities is welcome," Magogo said.

Minsa Kabanda, the chairperson of the Nakivubo management board, said they are satisfied with the progress of the work on the stadium and expect it to be completed on time."I am sure they will hand it over by 2021. Uganda should be thankful to this partnership and development of the stadiums," Kabanda said.

Following the guidance given by President Museveni, the Ministry of Education and Sports filed a formal application to the finance ministry for the construction of Akii Bua (Lira) and Buhinga (Kabarole) stadia using grant and interest-free financing from  China.

"As people of Kabarole, we are happy that the Government decided to support the building of the Buhinga stadium. With this we expect to see progress in talent development which has been hampered by lack of sports facilities," said Richard Rwabuhinga, the LC5 chairperson of Kabarole district. The construction of the two facilities is ongoing.

A total of 32 secondary schools that were selected in the first phase  to benefit from sports facilities received 1,000 balls for volleyball, soccer, netball, basketball.

Thirty million shillings was given to each of the 13 out of the 32 secondary schools to construct basketball courts. Also, about 244 sports tutors, teachers and selected district officials from schools, national teachers' colleges and primary teachers' colleges around the country were trained in physical education and sports management.

How fruit flies can give you a sprinting tummy

Insects are crawling closer to our plates