Demo farms: From bottle irrigation to the ...
Next Story

Salaries for teachers and staff in other educational institutions have already been increased under additional funding of sh185b that was announced by the Ministry of Public Service recently.

Salaries for teachers and staff in other educational institutions have already been increased under additional funding of sh185b that was announced by the Ministry of Public Service recently.

Primary school pupils in class. Universal Primary Education has increased enrolment and is bridging the education gender gap in Uganda
Improving the living conditions of the Ugandan population through education and sensitisation is key for the Government, President Yoweri Museveni said recently during a visit to Kibuku district.
"The NRM from the beginning was a party of educating people not looking for votes and telling lies," Museveni added.
This financial year alone, the Government set aside sh3.286 trillion to cater for the education needs of the country. This is an increment of about sh1.13 trillion from the 2018/2019 budget of sh2.15 trillion.
Much of this money will go towards paying a wage bill of sh1.84 trillion (56%), whereas non-wage investment will be sh0.8 trillion (25%) and sh0.2 trillion (8.6%) for the government of Uganda development. And, sh0.3 trillion (9.6%) is external financing.
Salaries increased
Salaries for teachers and staff in other educational institutions have already been increased under additional funding of sh185b that was announced by the Ministry of Public Service recently.
At entry, a Grade III teacher receives sh469,355 per month, which has been increased to sh499,684. Before the enhancement three years ago, the average salary of a primary school teacher was sh280,000. As an acknowledgment of the great job teachers do, the President promised to send a circular to teachers explaining the steps the Government was taking to improve remunerations for public servants and fix salary disparities. 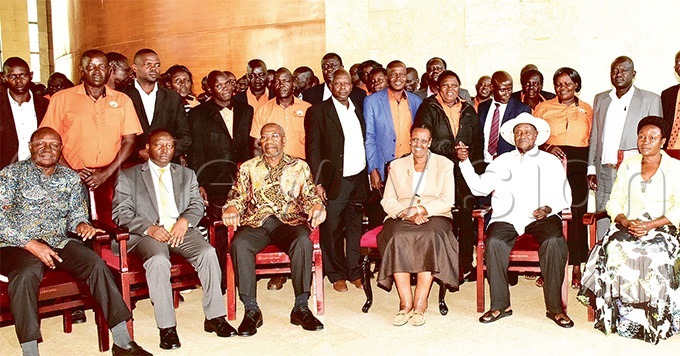 The President's remarks come at a time when there is tremendous improvement in enrolment and infrastructure turn around in most areas of the country.
Universal Primary Education
The programme is a major highlight of the contributions NRM has made over the years. Introduced in 1997, Universal Primary Education has increased enrolment and is bridging the gender gap, among other things.
For the period 1986-2004, enrolment in primary schools rose from 2,203,824 to 7,377,292 and 123,479 to 697,507 in secondary schools. Primary school enrolment increased from 3.1 million pupils in 1996 to 7.6 million in 2003 following the introduction of UPE.
In 2003, President Museveni announced a policy shift from four children per family to accommodate all. This saw more Ugandans join primary schools. An estimated 8.6 million children enrolled in primary school after the policy change.
Universal Secondary Education
To cater for the high numbers of UPE products, the Government introduced Universal Secondary Education (USE) in 2007. Uganda was the first county in sub-Saharan Africa to introduce USE.
Due to increasing numbers of school-going children, the Government has embarked on the construction of classrooms and grant-aiding more schools to help Ugandans access education.
As promised by the President, the Government is on a journey to establish at least one secondary school in every sub-county and a primary school in every parish. Under the Uganda inter-government fiscal transfers for results programme, 117 sub-counties without a public secondary school received funds in FY 2018/19 to construct seed schools.
An additional 115 new seed secondary schools shall be constructed in the FY 2020/21. Three seed schools at various stages of construction are; Nyangoma Seed SS, Kyotera, Nyakatonzi Seed SS in Kasese and Katikekile Seed SS in Moroto. The ongoing construction leaves 428 sub-counties, town councils and divisions without a public secondary school, according to the March 2019 ministry statistics.
Free technical education
On the issue of youth unemployment, the President said the Government will provide free technical education for all graduates who have failed to get jobs."We are also proposing that if you finish school and you can't find a job because of the course you studied, the Government should take you for a technical course so that you get a skill like woodwork, ceramics, Information and Communication Technology, etc.
We shall retool you. These jobs are in plenty and yet our children do not have skills, giving chance to foreigners to take these jobs," Museveni said. According to the Ministry of Education and Sports, the Government is grant-aiding 149 Business, Technical, Vocational Education and Training (BTVET) institutions. Although the commitment to establish a technical/vocational institute per constituency is yet to be achieved in the last three years, 28 various categories of BTVET institutions have been renovated, expanded, and equipped.
Universities
In July 2016, two new public universities became operational. This brings the number of public universities to eight of which Lira University, formerly a constituent college of Gulu University was built using Government funds. The Government sponsors at least 4,000 students in public universities. This year a total of 1,834 students were awarded financial aid through the Government's Students' Loan Scheme.
"The Government of Uganda over the years has been increasing the budget of the board. In the financial year 2019/20, the Government allocated an additional resource of sh2.4b, bringing the total budget to sh30.182b and this has enabled the scheme to award loans to 1,834 students," said the minister of state for higher education, John Chrysestom Muyingo.
Education sector review
During the 26th Education and Sports Sector Review held in August, the Minister of Education and Sports, Mrs. Janet Museveni, asked stakeholders to identify implementation bottlenecks and high-level priorities for implementation in FY 2020/21."If we are to transform education for the Ugandan children and enhance learning achievements for productivity and prosperity, I must appeal to all our stakeholders to understand, appreciate and play their roles and responsibilities," Mrs. Museveni said.
On the Business, Technical, Vocational Education and Training (BTVET), Mrs. Museveni said special attention is paid to it to address the technician level skills gaps in the economy and skilling school leavers, graduates and unemployed youth.
"To date, 90 districts have at least one BTVET institution. However, the government policy is for all 112 districts to have a BTVET institution in the short run before we target the constituencies," she said.
On Government's commitment to supporting girls with sanitary pads, Mrs. Museveni revealed that the Government is seeking a sustainable solution to this."The Government pledged to support the girls in school with sanitary pads, this has not yet been fulfilled because we are seeking for a sustainable solution, which does not support just a few schools or a one-off, but a strategy that provides a national permanent solution," Mrs. Museveni said.

Pikeâ€™s big mark on the media