As it happened | Uganda Today - Thursday, ...
Next Story

Locusts can cover as much as 150km a day and a swarm can destroy crops sufficient to feed 2,500 people for a year, according to the United Nations.

Locusts can cover as much as 150km a day and a swarm can destroy crops sufficient to feed 2,500 people for a year, according to the United Nations.

NATURAL DISASTERS | DESERT LOCUSTS
The Government has advised the public to stock up on food as a precautionary measure following reports from Kenya that indicate that the locusts have now reached the Samburu and Turkana areas, which are close to the Uganda-Kenya border.
Turkana is about 166km from Karamoja, meaning the locusts can reach Uganda in less than two days.

Locusts can cover as much as 150km a day and a swarm can destroy crops sufficient to feed 2,500 people for a year, according to the United Nations.
Experts estimate that the insects are capable of destroying at least 200 tonnes of vegetation per day.
Since the invasion in Kenya late last month, districts in Karamoja and eastern Uganda have been put on higher alert and the public asked to report to the nearest extension staff any ‘strange grasshoppers' detected.

On Tuesday, Prime Minister Dr Ruhakana Rugunda convened a meeting, where he said the threat of a possible invasion of locusts is increasingly becoming imminent. He said the Government is taking the threat seriously.
"Experts at the meeting warned that an invasion of the locusts would wreak havoc by destroying crops and vegetation, causing famine, thus the need to act with urgency," Rugunda said.

Experts say the locusts have the potential to destroy swathes of maize, coffee, vegetables and pastures.
Rugunda directed the agriculture ministry to quickly submit to the finance ministry a comprehensive list of requirements for preventing the invasion, including facilities for aerial spraying, for funding.
"We have to find the money to undertake preventive efforts, because we will save the country much more, other than waiting to respond. This is an emergency and all agencies must be on the alert to play their roles in a timely manner," Rugunda said.

Recently, the agriculture ministry requested for a sh5b contingent fund in preparation for the possible invasion of desert locusts.
The money is expected cater for aircraft fuel, pesticides for control, provide for ground spray equipment and spray teams and to create awareness in case of an invasion, state minister for agriculture Aggrey Bagiire said.
Rugunda also instructed different government agencies to work together to heighten the country's preparedness to prevent or handle the invasion.
"We call on our partners to work with the Government to prevent and combat the danger of a possible locust invasion," Rugunda said.

The desert locust is potentially the most dangerous of the locust pests because of the ability of swarms to fly rapidly across distances. It has two to five generations per year.Details here 👉 #EPAPER: https://t.co/BFkmnENYGl pic.twitter.com/cEElNRYAZ9

The Ministry of East African Community Affairs has been tasked with linking up with counterparts in Kenya to explore avenues of supporting Kenya's efforts to contain the pests.

Rugunda said the Government is in contact with authorities in Kenya to explore ways of addressing the challenge.
The inter-ministerial meeting was comprised of the ministries of agriculture, finance, internal affairs, defence, security, environment, local government, East African community affairs, presidency and disaster preparedness as well as the Uganda Wildlife Authority, which came up with a road map to prevent the invasion.
Representatives from the Desert Locust Control Organisation for Eastern Africa also attended the meeting. The matter was also discussed during Cabinet's meeting on Monday, Rugunda said.
Locust invasion in Kenya

The Food and Agriculture Organisation estimated one swarm in Kenya to be 40km wide by 60km long.

Large swarms of desert locusts started spreading into Kenya in December, after wreaking havoc in Somalia and Ethiopia.
Over nine counties have been affected, up from three in December. The government is yet to quantify the loss, but past attacks caused losses of up to 70%.

To control the spread, Kenya launched measures involving the use of planes and vehicles to carry out survey and control operations and use of pesticides.
In certain instances, out of desperation, Police fired tear gas at the pests, while residents clapped their hands, whistled and banged cans to chase the locusts.
The aerial spray of chemicals in Wajir and Mandera counties cost over Ksh300m (sh10b).

The Government has advised the public to stock up on food as a precautionary measure following reports from Kenya that deadly locusts are headed for Uganda. Grab your copy of the New Vision for details👉 #EPAPER: https://t.co/0LIzx6aLNh pic.twitter.com/coHLovXzTp

What are Desert locusts?

The desert locust (Schistocerca gregaria) is a species of locust, a swarming short-horned grasshopper in the family Acrididae. Plagues of desert locusts have threatened agricultural production in Africa, the Middle East, and Asia for centuries.
The livelihood of at least one-tenth of the world's human population can be affected by this voracious insect. 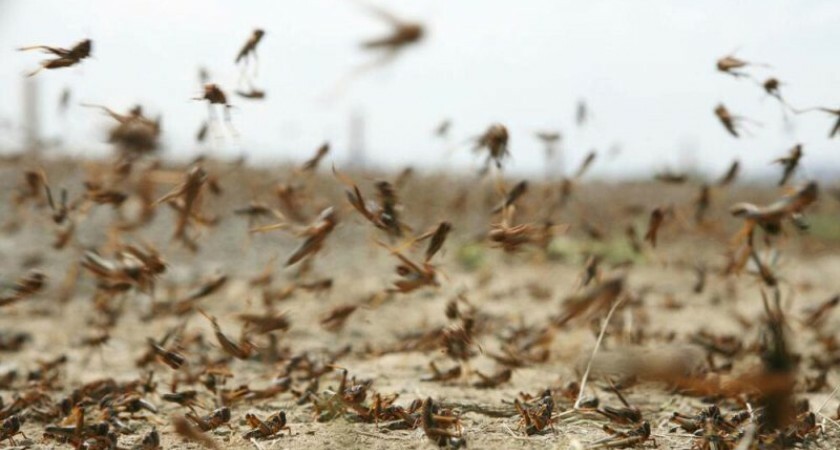 The desert locust is potentially the most dangerous of the locust pests because of the ability of swarms to fly rapidly across distances. It has two to five generations per year.

She Cranes team trimmed to 20 players