545 sub-counties to get on power grid

This month, the Chinese contractor TBEA Co. Ltd is expected to begin the construction of power lines to 545 sub-counties countrywide that lack electricity supply.The pressure to get more rural areas electrified has been high over the years.

The project dubbed,Bridging The Demand Supply Balance Gap Through The Accelerated Rural Electrification Programme, seeks to connect the sub-counties that are in darkness to the national power grid.

"We will begin this project this month. We could not start without advance payments to the projects. We have also selected the 14 sub-contractors out of 40 and can begin," Turyahikayo said.

He added pole treatment plants have been tested to select the best.Parliament in 2017 approved the $212m (sh763b) loan from the Exim Bank of China to finance the construction of power lines to sub-countries that are still in darkness.

The sub-counties were initially 287.With support from the Exim Bank of China, the Government is fast-tracking rural electrifi cation of the remaining 545 sub-counties out of the total 1,608 (including the newly created ones) to accelerate access and contribute to industrialisation and economic growth. 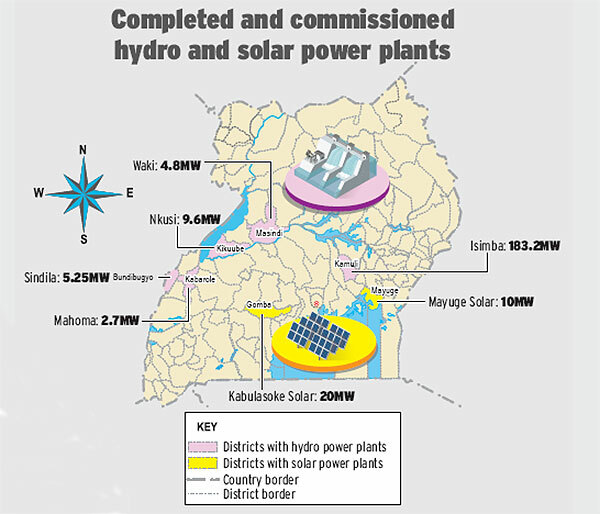 Coverage of district headquarters is almost complete with 124 out of 127 (97.6%) connected to the grid. The sector plans to connect the remaining districts of Kotido and Kaabong by the end of this Financial Year 2019/20.

The feasibility study to connect Buvuma district via a marine cable is still underway.The rural electrification access rate increased to 13% in 2019 from 1% in 2001. The Government targets to increase the current national electricity coverage to 30% by 2020 and 60% by 2026 from the current 24% access rate.TBEA Co. Ltd was selected to construct the power lines to sub-counties countrywide that lack electricity supply.

This move is expected to provide power supply to various consumers, reduce energy poverty and bring the nation close to achieving the Sustainable Development Goals (SDGs).SDG 7 calls for the universal access to affordable electricity and clean energy by 2030.

The state minister for energy, Eng. Simon D'Ujanga, said the project would provide employment to over 3,000 people. Local companies will supply poles which will cost $36m and 26,200km of electric wires would be purchased locally. The minister observed that the local content deal for Ugandans would be about 38%.

According to the loan agreement the Government is expected to provide $13m (sh46.8b) as counterpart funds. The project targets over 170,000 customers that would be connected directly to the grid during the three years of implementation. Members of Parliament said REA needs to improve its performance in managing loans and projects so that the project succeeds.

The goal of policy is achieving 60% level of access in rural areas by increasing the number of connections from an average 70,000 to 300,000 per year and targeting increase in demand on the national grid by 500mw, according to the ministry of energy and mineral development.

Umeme Ltd, the largest power distribution company targets to connect about 300,000 new customers per year under this policy. This will contribute to about 3% per year to electricity access rate and reaching a customer base of 3.4 million by 2025.

For Uganda to achieve middle income status by 2020, the target for electricity access rate is estimated at 30% and average consumption at 578kWh per capita.

The Minister Of Energy and Mineral Development, Eng. Irene Muloni, said the national electrification coverage increased from about 24% in 2018 to 28% by the end of June 2019.

She said this achievement was still low compared to the National Development Plan II target of 30%. Muloni said the progress on electrifi cation rate is due to Government efforts in the implementation of the Electricity Connections Policy 2018.

She said there are many on going projects that will benefi t rural areas and these include; the electrifi cation projects in six districts funded by Kuwait Fund where construction works contract have been signed.

PEOPLE CALL ME 'MAAMA PIG' BUT I AM NOT COMPLAINING

I owe my fame to farming