Ten years ago, the Uganda Road Fund (URF) was established by an Act of Parliament to operate as a 2G (Second Generation) Fund. It had the the objective of fi nancing routine and periodic maintenance of public roads from mainly reserved road user charges.

"It is premised on the fact that having ready money to maintain roads is a challenge, yet it is suicidal to depend on the Consolidated Fund, which caters for so many priorities and probably road maintenance comes at the tail," Eng. Dr. Michael Odongo, the URF Executive Director, explains.Indeed, the URF has registered quite a number of successes, one of which is putting road maintenance on the national agenda.

"There is no leader in Uganda today right from the President, to an LC1 chairman, who can fail to speak about roads when given a chance. Road users are also now aware that good roads are a right," he says.

The agency has grown the road maintenance budget from sh101b when it became operational in 2010, to the current half a trillion shillings. They have used the funds for community access roads and involved local governments, through district local committees, in the management of all district urban and community access roads.

URF has also successfully involved road users through the road user satisfaction surveys to get feedback to inform the policy on roads. Other achievements are the institutional set-up, staff recruitment and training, office premises and formation of district road committees. Additionally, there is the preparation of road maintenance plans (2010/11 to 2019/20) and corporate and strategic plans in line with the National Development Plan. 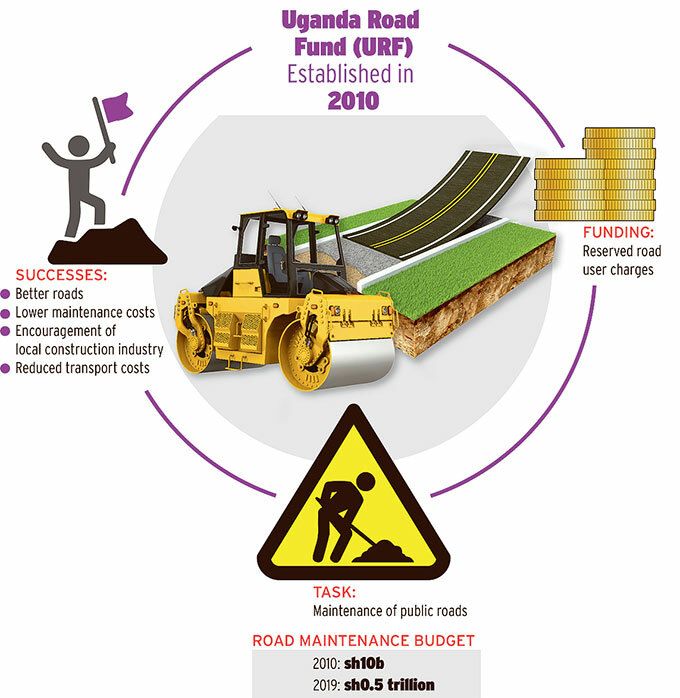 This  includes work plan analysis and accountability review for funded maintenance programmes of public roads, amounting to sh3.1trillion, inclusive of ferries, road safety and axle load control. URF also did monitoring and evaluation of funded interventions in Uganda National Roads Authority (UNRA), Kampala Capital City Authority (KCCA), Other entities are  municipalities, districts (and their sub agencies - town councils and sub-counties. URF has provided oversight and performance audits in designated agencies, as well as building the capacity of the fund and designated agencies through technical support units.

It also secured European Union technical assistance funding worth circa 3m euros.  During the launch of the 5th Road User Satisfaction Survey more than two years ago, the Minister of State for Works Gen. Katumba Wamala said the Government is committed to rooting ineffi ciencies in road maintenance by strengthening the capacity of road agencies. He said the acquisition of 1,151 force account equipment for all road maintenance agencies was a step in that direction.

A complete unit comprising of a grader, wheel loader, roller, dump trucks and water bowsers have already been distributed to agencies.Other achievements include systems establishment, the road maintenance management system, the unit cost model and allocation formula.The agency has commenced construction of the sh70b URF/PPDA House. The fund has a duty to fi nance the implementation of the Annual Road Maintenance Programmes carried out by UNRA, KCCA and the other designated agencies responsible for district, urban and community access roads.

The gains due to such stable and predictable fi nancing, together with effective monitoring of fund use, have led to improvements in the condition of roads, reduced road maintenance costs, encouraged a vibrant local construction industry, while reducing road maintenance backlog and eventually, transport costs.