“You have a responsibility to deliver so strive hard to ensure you deliver because the ball is in our court to ensure we deliver the mission and vision of the NCS as well as that of government..."

“You have a responsibility to deliver so strive hard to ensure you deliver because the ball is in our court to ensure we deliver the mission and vision of the NCS as well as that of government..."

State Sports Minister Denis Hamson Obua has rallied the National Council of Sports staff to rally behind him as he implements his new role as the head of the sports sub-sector.

But the minister starts work amid challenges of lack of infrastructure, limited funding among other challenges that he promised to tackle with the different federations and stakeholders.

Obua was on a familiarization tour of the National Council of Sports headquarters where he also held a series of meetings with the NCS top brass and the board of directors as well as all the staff before touring the sports facilities around.

The minister told the staff that NCS was a very important institution in as far as delivering the vision of government regarding sports is concerned because they were a body established by an act of parliament with specific mandate to complement and supplement government efforts in delivering the different sports disciplines to Ugandans at national, regional and international level.

"The reason I'm here is to make you know that you are part of the team; when Uganda celebrates medals won from anywhere you can't delete the name of NCS, the president, the minister because we are all stakeholders.

"But you're more key because you are mandated to by law to register and accredit all the national federations and also delivering the national vision and the vision of the ministry," Obua stated before arguing them to rally behind him to implement the president's directives to all ministers upon their recent appointments.

Obua said the president, following the mini reshuffle that brought them in office, asked them to ensure stability in the sports sub-sector, avoid corruption by utilising public funds well, standing with the masses by promoting what benefits the people and be straight and focused by standing for the truth.

"You have a responsibility to deliver so strive hard to ensure you deliver because the ball is in our court to ensure we deliver the mission and vision of the NCS as well as that of government," Obua counseled before arguing them to perform to their best because they were all staff of the Minister of Education and Sports.

He also hinted on working to ensure NCS becomes autonomous and noted the lack of infrastructure, funding as some of the challenges to the sports sub-sector. But he argued sports federations to be creative and innovative and look for corporate sponsorships so that government comes in to supplement their efforts, before professing a better sporting future. 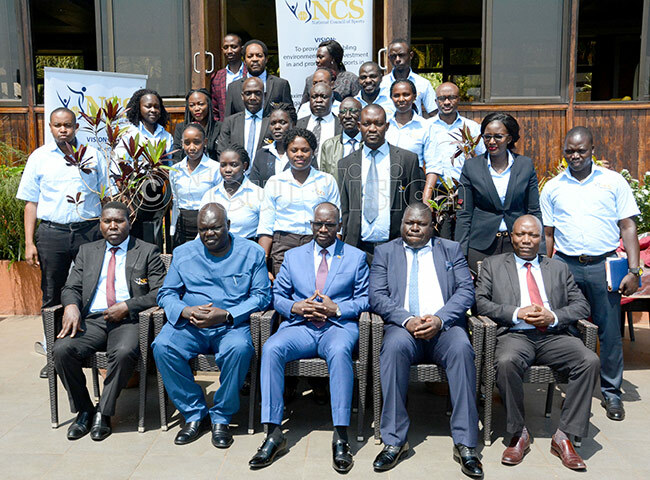 State Sports Minister Denis Hamson Obua (seated-center) poses with the top NCS top brass after a series of meetings and a familiarisation tour of the facility at Lugogo.

He promised to work with the NCS and the federations to engage corporate companies and interest them in funding sports before hailing his predecessor Charles Bakkabulindi for the achievements he registered in his 14-year tenure despite the challenges.

NCS Chairman John Bosco Onyik told the minister that NCS had 57 contracted staff and 50 federations affiliated to council and promised to continue promoting sports for the benefit of all Ugandans.

"We changed the terms of recruitment from permanent to contractual basis with a minimum of 3 years and we are trying to merge some offices and create new offices to get value for what we want," Onyik said.

The minister will on Wednesday at Lugogo meet the federation heads during the first quarter's national forum for sports.

A grain of science:

Sniff out the ovulating girl