Prepare for retirement, Ntagali tells the ...
Next Story

Kagina cautions drivers on over speeding

"Maintain order in the city, respect the road laws and also maintain cleanliness in hospitals so that the sick do not contract secondary infections"

Allen Kagina, the executive director of Uganda National Roads Authority and the husband Paul Kagina laying a wreath on the casket of late Timothy Musherure during the late's funeral service at Namirembe cathedral in Kampala on the Jan 20, 2020. Photo by Jimmy Outa

"Maintain order in the city, respect the road laws and also maintain cleanliness in hospitals so that the sick do not contract secondary infections"

The family of Paul and Allen Kagina have asked Ugandans to respect the road regulations to avoid reckless driving that leads to accidents, this was during a funeral service of Timothy Musherure a relative to Kagina

On a fateful day, he was knocked down by a speeding taxi along Kampala road. His life was prolonged by the good action of bodaboda cyclists who gave him first aid and rushed him to Case Hospital, however, their efforts could only prolong him for a week as he breathed his last on Wednesday.

During his funeral service at Namirembe Cathedral, Musherure was described as a hardworking, humble, kind and humorous man. "I am soliciting for prayers for strength. 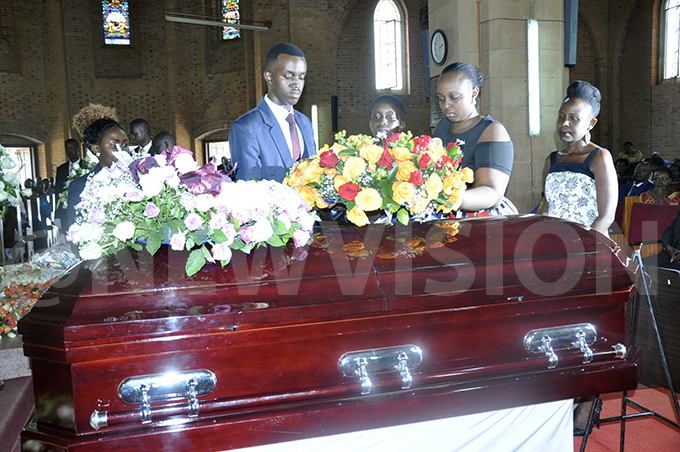 Children of the late Timothy Musherure laying a wreath to the casket of their Father. Photo by Jimmy Outa

In our family, it was Timothy who loved harmony, humility, and tolerance in all situations. 26 years back when I had heart surgery, he was a pillar in my life saying that I would get back my strength," said Paul Kagina, a brother.

Kagina called upon people to maintain order in the city, respect the road laws and also maintain cleanliness in hospitals so that the sick do not contract secondary infections.

"I was told by the doctor that Timothy was about to be discharged but after a few days he got an infection from the hospital which lead to his death," said Kagina. With tears flowing down her cheeks, Suzanne Kazoora Musherure, the widow said the judge who convicted and sentenced her husband directly killed him.

"If it was not for the action of the judge, he would not have been at the high court where he was knocked from. The judge's act indirectly killed him. First, he was convicted for the crime he never committed. he was a good person," she said. 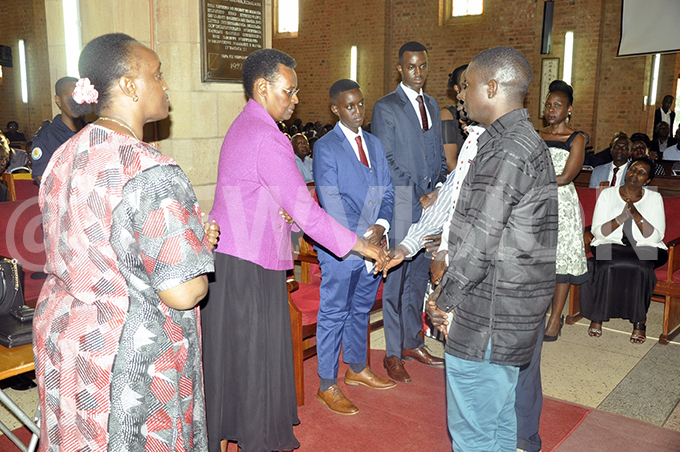 The first lady, Janet Museveni interacting with the good Samaritans (Boda-boda cyclists) who rushed the late to the hospital. Photo by Jimmy Outa

His children could not hold back the tears as they remembered the good times they have shared with their father. "Dad our lives changed the day you passed on but you were a great father who always cracked jokes, you always put a smile on my face.

Dad, you will always have a special place in our hearts," said Alexander, the son. During the service, the boda-boda cyclists who gave him first aid were appreciated and they had an opportunity to greet the first lady.

Burial will be on Wednesday in Sheema. Fact file He was born to the late Alfred Mutashwera and Hilda Kamatondo on 5 April 1960 in Sheema-Kinaku. He went to St Helen's Primary School Nyamitanga, Mbarara Junior School, Makobore High School in Kinyansano and Ntare School.

He worked with Uganda Commercial Bank, Ministry of Agriculture and Ministry of Health. He is survived by a wife Suzanne Kazoora Musherure and four children.

What happened to English?