800 get free prenatal care services in Kyo...
Next Story

Some of the injured players (Photos by Hudson Apunyo)

One person died from hospital while scores of others are admitted with different categories of injuries when a team of footballers and their fans traveling from Erute North for a friendly match in Lira town were involved in a nasty accident on Sunday afternoon.

The football players and fans from Agweng Rising Stars in Agweng town council, Erute North were travelling to Lira town to play a friendly match against AYAGO Bombardier Football Academy  at Ayago Primary School in Railway division when the vehicle in which they were lost control and overturned.

The injured were rushed to Lira Regional Referral Hospital and some to Giftlife Care Centre. 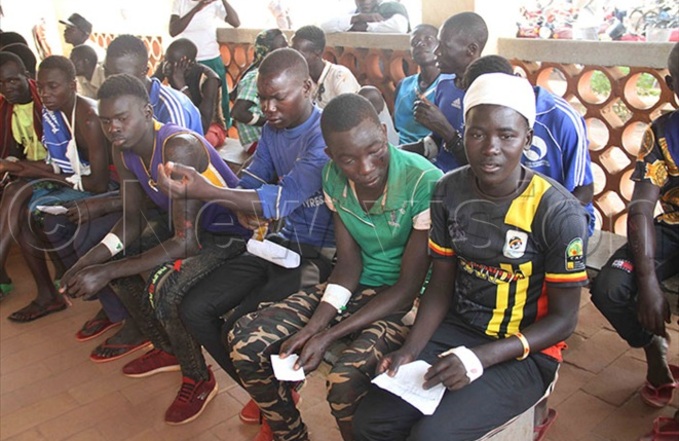 The teams coach Alfred Alepo identified the deceased as Sam Oweka, 35, the team's financial officer. He also said   that another person identified as Gerald Odongo, 24, is in critical condition.

The tipper lorry registration number UAE 828H belonging to the former area Member of Parliament Omara Adigi being driven by a one Lameck Adima, 35, was carrying over 45 players and fans.

Alepo said 35 people were injured, two sustained fractures while others had head injuries and bruises.

Michael Odongo, the chairperson LC3 of Ogur sub-county where the accident occurred said after the accident, a group of people removed the accident vehicle and took it away despite warning from a police officer at the scene.

Most of the victims said they did not understand how the accident happened and only woke up in hospital.

Elvis Ogwang, 22, a player who sustained bruises on the arm and head said he saw the vehicle was leaving the road and become unconscious and only woke up at 8:00pm in hospital.

Ogwang said the driver is inexperienced and was over speeding.

It was not possible to get comments from the police as the Officer in charge of traffic was reported to be in the field.