MENU
Bugingo is mine and will return - Teddy Naluswa
Previous Story

As it happened | Uganda Today - Monday, Ja...
Next Story

Ogwang, the Usuk County MP who made his maiden return to his constituency since his appointment, was welcomed by locals at Komolo trading centre, about 10kms from the heart of Katakwi town.

Ogwang, the Usuk County MP who made his maiden return to his constituency since his appointment, was welcomed by locals at Komolo trading centre, about 10kms from the heart of Katakwi town.

Ogwang, the Usuk County MP who made his maiden return to his constituency since his appointment, was welcomed by locals at Komolo trading centre, about  10kms  from the heart of Katakwi town.

Overwhelmed by the big crowds at Komolo bridge about 5kms from town, Ogwang came out of his official car and trekked with his voters up to Katakwi town where they made various stopovers to greet their voters.

At Getom trading Centre, the youths took Ogwang by surprise when they lifted him up onto the roof of the National Resistance Movement office and made him sit on a plastic chair as a way of commissioning it. Minister Ogwang cutting the tape during his homecoming recently

The MP addressed people of Katakwi town and Ocorimongin cattle Market before proceeding to address hundreds of people in his home parish of Aliakamer, at Aliakamer Primary School.

Ogwang said, his trekking was a sign of being closer to the people and he promised to continue leaving a simple life with locals.

He asked the electorates to isolate the leaders who want to continue dividing the people of Katakwi.

He preached peace and forgiveness especially to those who were spreading falsehoods about his academic papers with an ill motive to ruin his ministerial appointment.

Ogwang also promised to serve all the people without segregation and promised to improve telecommunications network and internet connectivity in the district and also stock computer labs in schools.

Ogwang preached peace, unity and forgiveness especially to those who were spreading falsehoods about his academic papers with an ill motive to ruin his ministerial appointment. 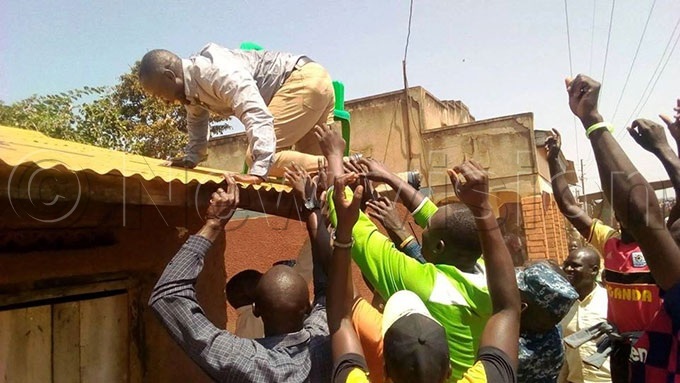 Ogwang being carried down after greeting his voters

On January 6th, Emmanuel Byamukama Tayebwa, filed an intention to sue MP Ogwang alleging that he did not possess requisite education qualifications to serve as a Member of Parliament.

The petition came days after Ogwang was duly vetted by the parliamentary appointments committee as state minister for ICT.

It is on parliamentary record that Ogwang possess the minimum academic qualification which is an A-level certificate or its equivalent and I am going for the second degree in law in the next five years.

The minister said he sat Ordinary level of education in Soroti SS before heading to Tororo Progressive SS for Advanced level where he served in those schools as assistant head prefect.

"I forgive Byamukama who was used by certain politicians in Katakwi to try to tarnish my name.  I have the qualification to be appointed to stand as a president of this country," he said.

He called upon the people not to be diverted by such minor issues saying he has been appointed based on his hard work and he will support the government to his best knowledge and ability.

Ogwang promised to start his new role by launching the construction of an IT lab in Soroti hub where he encouraged the young innovations to show their skills in ICT like making new applications. There are about seven sites in the country that are going to have IT labs.

He said, his other immediate role is to enforce the press and journalism act to remove non-journalists professionals like teachers in the media houses.

He noted that communication between the locals and security around the Teso/Karamoja boarder has been a problem and this made Karamojong warriors to continue raiding their Iteso tribesmen.

"Issues of bad network, lack of computers in schools in Katakwi is going to be history because I am now in charge of ICT ministry," Ogwang said.

Jorem Obukui, the LC3 Chairperson Akoboi new Sub County is optimistic that all teachers and learners in various schools will now learn how to operate a computer.

Filbert Ochom, the speaker of boda boda cyclists in Katakwi asked Ogwang to continue listening to the electorates because they are the ones who raised him to another level.