Was it being a daredevil? Adventurous? Or just being a show-off? Those are some of the questions that whirled in my head as I descended the Rwenzori Mountains, also known as Mountains of the Moon, last month.

The mountaineers who made it to the Margherita peak

I have had conquering snow-capped Mt. Stanley on the Rwenzori Mountains on my bucket list for a long time, but I had not yet got the right opportunity and good crowd to move with.

So, when I was invited by Uganda Tourism Board's (UTB) chief executive officer, Lillian Ajarova, through the Conservation Media Camp (CMC) team to go conquer the highest point in Uganda - the Margherita peaks on Mt. Stanley, in the Rwenzori Mountains - alongside Australian professional mountaineer Tim Macartney-Snape on December 28, 2019, I said yes.

I even suggested we conquer the peaks in five days and not eight. A few colleagues were baffled and laughed at me, while others cheered me on.

The writer (in the lead) leading his colleagues in the climb

I kept thinking what a thrill it would be to enter the year 2020 on top of Uganda. Perhaps entering another decade on a high would signal flying higher in every aspect of life.

There were two options on the invitation; to either climb the mountain for eight days to the highest point or to do the one-day trek to the first camp - Sine Hut camp (2,560m) and return.

A few faint-hearted members opted for the one-day trek and about seven of us decided to go for the eight-day trek to Margherita. We even planned to carry a few ‘bitter' drinks for the climb. What a joke!

We were told it takes approximately eight days for beginners to hit the Margherita peak, while the fit and professional mountain climbers can take five days. Services offered include a day or two to full-on seven- or eight-day trek.

Mt. Everest, located on the border of Nepal and China, is the highest mountain on earth, standing at 8,848m above sea level.

Macartney-Snape and his colleagues at the time attained the feat without bottled oxygen in lightweight alpine style and without the help of high altitude porters.

Those that have climbed mountains know the role those porters play in helping you get to the peak.  For that achievement, Macartney-Snape and his colleagues were both awarded the Medal of the Order of Australia (OAM) for their service to mountaineering.

So, Macartney-Snape was here to conquer the five peaks of the Rwenzori Mountains, including Margherita, the third highest peak in Africa, located on the border of DR Congo and Uganda. We were to tag along.

Friends who had conquered the Rwenzori Mountains before had regaled us with tales of the activity as though it was a mere walk in the park. Not really. It is a tough climb.

You only have to be focused to conquer it.  It is no wonder our hosts, Rwenzori Trekking Services (RTS), which was founded by Australian-Ugandan, John Hunwick and the UTB team, eventually decided to have the entire media crew do the one trek, since we were all beginners and might slow down Macartney-Snape and his team. 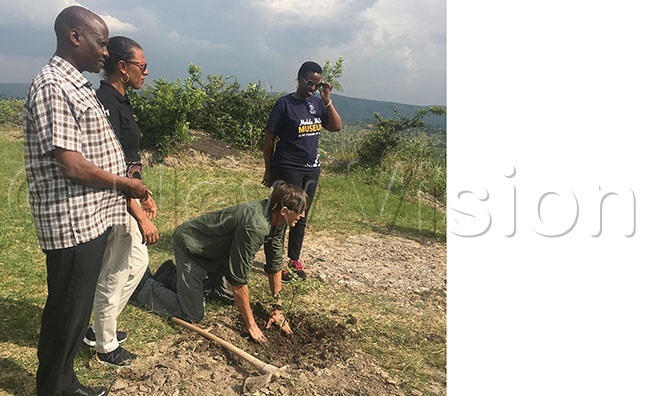 I felt cheated and even relaxed in my preparations as soon as they announced that we will do a one-day trek. You have to prepare mentally and physically for the climb. The money I had arranged to buy mountaineering gear, such as hiking boots, thick woolen jackets and water-proof pants, altitude tablets and all that stuff, was added to my Christmas budget and off I went to Kyaalo (ancestral home) in Kumi to meet my ancestors for Christmas before returning for the one-day trek.

It took us close to 10 hours to travel from Kampala to our destination, Trekkers Hostel found in Kyanjuki village, Kilembe, 12kms from Kasese town. On any other day, it can take you approximately six hours to reach Rwenzori National Park, but we made two stopovers which somewhat delayed us on the road. One at the Equator on Kampala-Masaka road about 420km from Kampala and another at the 1520 AD Eclipse Monument on Biharwe hills, Masaka-Mbarara highway, where Macartney and Ajarova planted acacia trees in a campaign to conserve the environment.

The RTS made us comfortable on arrival and amused us with stories of the Rwenzori mountains - we got to know that the first Ugandan, a one Bigeni, to climb the Margherita peak while bare feet in the 1950s, was ailing at his home nearby.

"These Ugandans (Bigenis and his ilk) need to be celebrated more than the Mzungus that come here. You need to tell their stories so that they are known out there, but you (media) do not. I have lived in Uganda for over 30 years and the first time I came here, I saw so much potential in this region, but the stories were not told," Hunwick told the media team.

That sank in as we went to bed.

The next day at 10:00am, we set off for the mountain using the Kilembe route, after a briefing from Uganda Wildlife Association senior warden James Okware and RTS chief guide Joshua Bwanbaale.

Since most of us were beginners, we were in a hurry to reach our destination - Sine camp. Calls by our guides not to rush fell on deaf ears - we were in ‘overtaking' mood. At some point, yours truly declared himself the pacesetter of everyone and was ahead most times.

The mountain is a beautiful beast - thick, with beautiful plant life; densely covered in tropical evergreen forest as you scale the heights. Since it straddles the East African valley in western Uganda, one will also be amazed by the beautiful alpine botany as one hits the steeper areas.

By the time we settled for a quick lunch around Musenge (2240m up the mountain), four hours into the trek, many of us who were in overtaking mode were gasping for breath, but we had to continue.

As we devoured our lunch of rolex (a local snack of fried eggs wrapped in a chapatti), bananas, chicken and juice, Macartney-Snape and his group, which we had overtaken and left behind thinking we were the mountain's Usain Bolts, ambled past us like they were taking a stroll in town. They looked at ease in their movements, which showed their mountaineering experience. We never caught up with them again.

By the time we set for another four hours to Sine, we had learnt a steep lesson - never rush the mountain. One of our guides, a one Jessica, had warned us earlier for she knew it would be a steep climb for inexperienced ones like us. The best advice ever.

Walking at your pace gives you time to savour the mountain and breathe in nature at its best, absorb the diverse flora ranging from giant heather trees to valleys of ferns.

We reached Sine, which oversees Mulyambuli River, had a sumptuous dinner prepared by the guides and slept off. We had to eat very fast because the place was so cold that it could cool off food in minutes. The river's falls roared in the night to offer us the perfect soundtrack for sleep.

The Rwenzori national park, which is the conservation area for the mountain, is a UNESCO World Heritage Site and covers almost 1000 sq. km.

It is also home to 217 species of birds, with 17 of them only found in Rwenzori. This justifies UNESCO labeling it as a key Birding Area. Aside from the other wildlife, such as the blue monkeys, we found out from Okware that the mountain is home to the endemic Rwenzori leopard.

The mountain can be muddy at times, which makes it difficult to climb if the shoes do not have a firm grip.

My pair of moccasin shoes got terribly ripped by the strain of maneuvering past the slippery areas, much to the amusement of my colleagues.

At Sine camp, Okware insisted that we had not seen enough and encouraged us to go higher.

"Sine is just good for people who love conservation and nature, you have not felt the real mountain. First get to Kalalama Camp (3134m) where it is steeper and get a feel of the mountain. But it also gives you a chance to see the Albertine region and lakes George and Edward as you head for the peaks," he said.

A few colleagues heeded to Okware's advice and, led by Ajarova, headed for the Kalalama camp the next day, while some of us, a little unfit to continue up, decided to descend the mountain. Only one of our colleagues, Franklyn Ezaruku, decided to match on with Macartney-Snape's team.

Mountaineering activities on the Rwenzori Mountains benefit the locals (mostly the Bakonzo) in creating job opportunities. They work as porters, guides, arts and craft vendors, among others.

Joshua Bwambaale, the lead guide at RTS, was a geography teacher who quit teaching to become a guide. It is an activity UTB intends to promote keenly in its product development strategies.

Did Macartney-Snape conquer Rwenzori's five peaks?
Macartney-Snape and his team conquered Margherita, but could not proceed to the other peaks because of the weather.

"We could have done all the five peaks, but the weather was harsh. And the other members would not have made it if we had proceeded, yet we had to stick as a team. It is the extreme weather that stopped us, but we managed to get to Mutinda, which stands at 3900m and the Observation peak," he said upon return.