Facebook should have been contacted during my trial - Nyanzi

Dr Stella Nyanzi (left) with her lawyer Isaac Ssemakadde at the International Crimes Division of the High Court in Kololo. Photo by Wilfred Sanya

Jailed former Makerere University research fellow Dr Stella Nyanzi has told court that prosecution failed to contact Facebook about the alleged post on her page that has been the source of her legal woes.

Nyanzi, represented by Isaac Ssemakadde and Gerald Owiny, insists that Facebook had to be contacted and brought to court to attest whether her poem was abusive, immoral or harassing as prosecution stated.

Nyanzi, currently serving 18 months jail, appeared before the International Crimes Division of the High Court in Kololo on Thursday for the hearing of her appeal against her conviction over cyber harassment.

Appearing before Judge Henry Peter Adonyo, Nyanzi told the court to quash and set aside her conviction and sentence, arguing that the prosecution failed to contact Facebook, yet the alleged offence was reportedly committed via Facebook.

"Facebook keeps a register, record, inventory, database of the profiles of its users and their online activities. Their evidence could and should have been obtained through accepted techniques or cyber forensic investigations and other facilities available to the state, but the latter deliberately ignored them," Ssemakadde said. 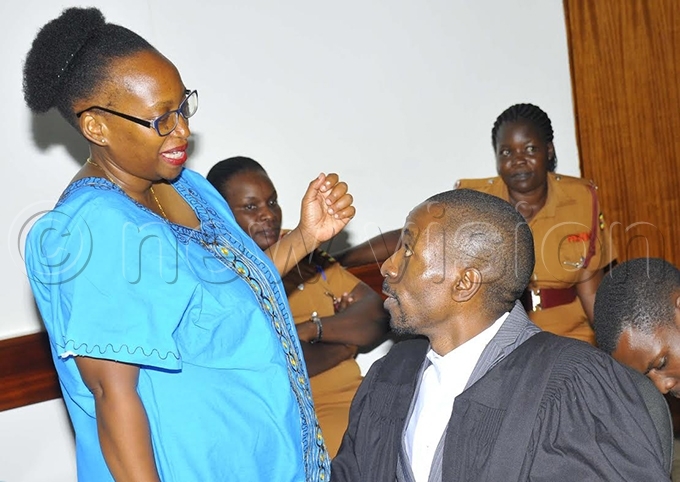 The appellant also told the court that only Facebook is truly aware of the particulars of its registered users and their restrictive online activities.

"Facebook routinely shares this information with complainants and law enforcement agencies across the world, in accordance with the law. So, had the post been unlawful, the appellant would have been blocked or reported to the state security, but they didn't and neither did the state consult them," he added.

"This justification for shunning Facebook was unlawful, unreasonable, unfair and unethical," Ssemakadde said.

However, state attorney Timothy Amerit, told the court that the evidence was so sufficient to link the appellant to the post and the Facebook account ‘Stella Nyanzi'.

"So, there was no need to invite Facebook in the case," Amerit said.

He further stated that Facebook does not govern Uganda and that its policies are subject to Ugandan laws but not the reverse. Dr Nyanzi is led away by Prisons wardens after the court appearance. Photo by Wilfred Sanya

The case was adjourned to Friday.

Under the law, a person who commits cyber harassment is liable on conviction to a fine not exceeding seventy-two currency points or imprisonment not exceeding three years or both.

For offensive communication, one who wilfully and repeatedly uses electronic communication to disturb or attempts to disturb the peace, quiet or right of privacy of any person with no purpose of legitimate communication whether or not a conversation ensures commits a misdemeanour and is liable on conviction to a fine not exceeding twenty-four currency points or imprisonment not exceeding one year or both.

Nyanzi was on August 2, 2019, sentenced to 18 months in prison after finding her guilty of cyber harassment contrary to sections 24 (1) and 2 (a) of the Computer Misuse Act, 2011, but acquitted of offensive communication by the Buganda Road Grade One Magistrate, Gladys Kamasanyu.