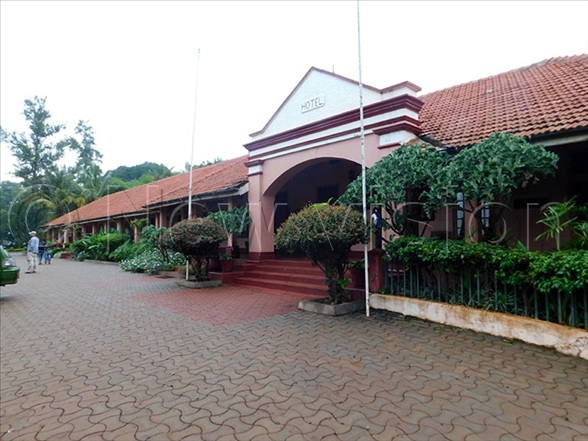 After a four hour drive from Kampala city, the van ground to halt at Masindi Hotel where sweet scents of coffee and cuisines hang in the air.

Thirteen of us dashed to the dining for a chilled glass of tropical juice, coffee, Chicken Tikka, chips, and chicken. As we wolfed our portions my eyes scanned the walls and halted on a photo of a bearded man next to a leopard.

"Do you know something?" asked the proprietor Rahim Mohamed. "Author Earnest Hemingway once dined, wined and spent a night here with his wife. Their room has been refurbished but still retains its ancient doors, bathtub, and window."

This revelation took me back in time when his book titled For Whom The Bells Toll was a part of my literature books. The story of Michael Jordan a USA volunteer attached to the Republican Spanish guerilla force in 1940 came alive in my mind. 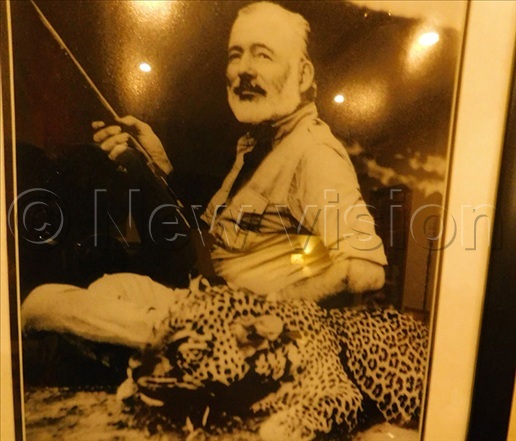 A photo of Hemingway graces the walls. Photo by Titus Kakembo

Back to Masindi Hotel, I learned that during their trip Hemingway with one of his four wives, Mary Welsh, crash-landed while touring Murchison Falls National Park. The three of them sustained minor injuries but his wife who broke two ribs. They were later transferred to Nairobi while sipping wine and whiskey.

He was reported dead back home and obituaries were published in the media. This made him the first man on earth to read his orbituary and edit it. Looking at the furniture here which speaks volumes, about the many years of existence, one cannot help wonder whether  President Museveni and Omukama Kaboyo used them when they pop in.

"The roots are cracking our sewerage system but we are reluctant to cut it because birds treasure it," confides Mohamed on a guided tour of the property. "The tiles have never been replaced but there is no leakage. This is heritage..."

While in Masindi one can have the opportunity to sleep in the room where Hemingway slept, seat on the ancient seat President Museveni used or use the fork Omukama Kaboyo prefers. Tourist attractions there comprise Murchison Falls National Park, Budongo Forest and Omukama Kabalega tombs.

History is told of how Kabalega with his spears, bows and arrows resisted colonialism. His tombs are an hours drive away from this ancient hotel built in 1920. Masindi is a place that is visibly slow-paced and an ideal place for one to reflect on their lives and have a holiday.