Pomp and fanfare as Mumbere's wife returns to Kasese

As her motorcade snaked through the town centre, shopkeepers momentarily abandon their business to get onto their verandas to wave to her as she stood through the open roof of her vehicle waving back.

The Rwenzururu Queen returning to Kasese Wdenesday after three years (Photos by John B. Thawite)

As her motorcade snaked through the town centre, shopkeepers momentarily abandon their business to get onto their verandas to wave to her as she stood through the open roof of her vehicle waving back.

KASESE - Business came to a standstill with residents flocking the streets to have a glimpse of the Rwenzururu Nyabaghole (queen), Agnes Asimawe Ithungu, who returned to the kingdom this afternoon after more than three years.

She left the region after the institution's king, Charles Mumbere, was arrested along with some 200 of his subjects, including his acting prime minister, Johnson Thembo Kitsumbire, during a security raid on the palace.

The healthy-looking jovial Nyabaghole jetted into Kasese aboard a military chopper, AF639 that landed at Kasese aerodrome just before 1:30 pm amid tight security.

She was accompanied by Edwin Kugonza, the vice-chairperson of the Prime Ministerial Committee (PMC).

The PMC is the Rwenzururu care-taking organ since the arrest of Mumbere and his acting prime minister, Johnson Kitsumbire. 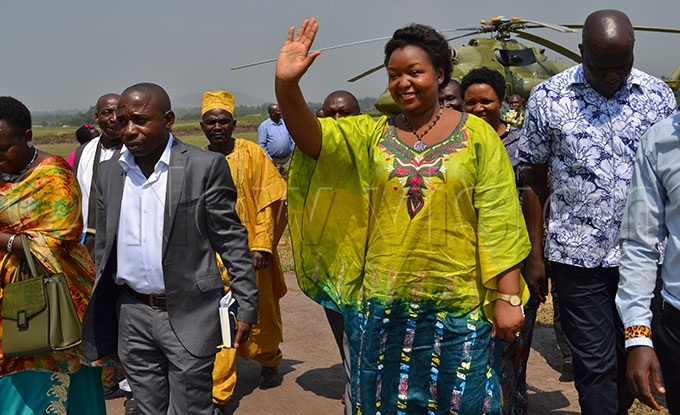 The Nyabaghole waving to kingdom subjects at Kasese airfield

Mumbere, along with some 200 of the Rwenzururu subjects, most of them royal guards have since been charged with criminal offences including treason, murder, arson, attempted murder and destruction of property.

She was received at the airfield by the Resident District Commissioner (RDC), Lt Joe Walusimbi, who is also chairperson of the district security committee, the mayor Kasese Municipality, Godfrey Kabyanga, the Rwenzururu cabinet, led by PMC chairman, Gad Mbayahi, members of the royal family led by Prince William Kibanzanga and the kingdom's Attorney General, Alfred Makasi.

Addressing the press shortly after welcome remarks by the chairman of the visit organising committee, Dr Nathaniel Walemba, Mbayahi and the RDC, the Nyabaghole said her return, which was facilitated by the Government, was in the Rwenzori region to promote peace.

"After what happened three years back, I have come for peace," she said.

"I have also come to console and comfort the families that lost their dear ones in 2016." 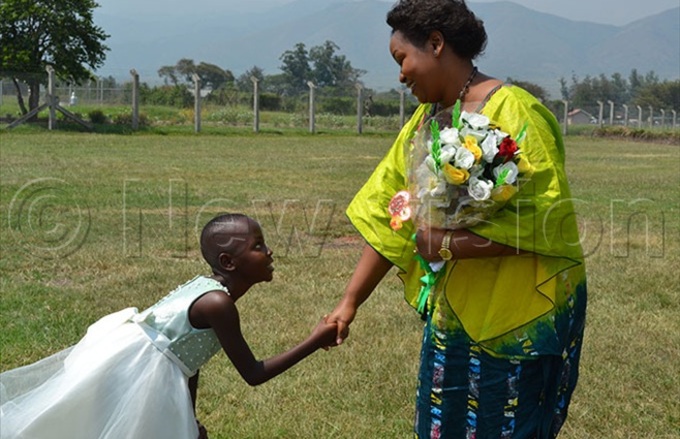 The queen being welcomed to Kasese. Photos by John Thawite

"I am also here to convey the Omusinga's message of hope. He appeals to the Banya Rwenzururu (Rwenzururu subjects) that all is not lost and that he is optimistic that one day he will return to his kingdom.

She conveyed the king's message to the subjects to "remain calm, promote peace and stability in Rwenzori region".

She was later driven out of the airfield through a multitude of chanting, drumming, dancing subjects through Kasese town up to a house in Kilembe quarters as hooting, blowing whistles, waving drivers and motorcyclists followed her convoy.

As her motorcade snaked through the town centre, shopkeepers momentarily abandoned their businesses to wave to her as she stood through the open roof of her vehicle waving back.

She was driven from the airfield along Fort Portal-Kasese highway,  Kilembe Road and Alexander Street down Mugurusi.

Commenting on her visit, the RDC said it was a sign of peace and stability in the region.

Mbayahi said her visit symbolises the revival of cordial relations between the Rwenzururu and central government, which went sour around three years ago.

"We are ready to co-operate and live harmoniously as we used to in the past for development," Mbayahi said.

"This shows that there is a lot of improvement. The appointment I got was to nurture better relationship between Rwenzururu and central government," he added.

Mbayahi said if the current calm and co-operation is sustained, total peace and development was likely to return to the area.

He said he would use the visit to consolidate stability and unity and diversity in the region, which has been torn by ethnic and military conflicts for decades.

According to the OBR spokesperson, Yona Tumusiime, the Nyabaghole is slated to address her subjects in Bwesumbu, Maliba, Kitswamba and attend prayers at the South Rwenzori St Paul's Cathedral, where she wedded Mumbere several years ago.

The queen will also attend church service at the Kasese diocesan Cathedral before returning to Kampala.

Notice from TASO (U) Ltd