Africa struggles to stem deadly flood of f...
Next Story

Ssekikubo was remanded to Masaka Central government prison on June 13 after the state cited him for having skipped bail in 2010 in Court.

Ssekikubo was remanded to Masaka Central government prison on June 13 after the state cited him for having skipped bail in 2010 in Court.

Lwemiyaga County Member of Parliament in Ssembabule district, Theodore Ssekikubo has been granted bail after the prosecution failed to adduce court records regarding his jumping of bail in 2010.

Ssekikubo was remanded to Masaka Central government prison on June 13 after the state cited him for having skipped bail in 2010 in Court. He had been arrested for disrupting the NRM party elections in Ssembabule district.

Others cases include being in possession of unlawful ammunition, inciting violence, destruction of NRM party electoral materials, obstructing police officers on duty and threatening violence.   The attempted murder file against Ssekikubo and his bodyguard, PC Alex Mugabi was set aside on the request of the state.

On Tuesday, Ssekikubo was granted a non-cash bail of Sh10m and Sh25m not cash for his sureties before the case was adjourned until February 18.

As he left the court premises, Police fired tear gas at his chanting supporters to stop them from the procession to Masaka Town.

The Masaka Chief Magistrate, Deo Ssejjemba said the then charge sheet in regard to the offences committed by Ssekikubo presented by the state did not bear any signature of a judicial officer from Masaka Court. 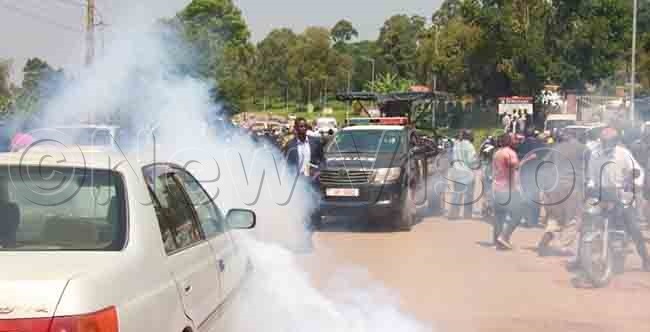 Police fires tear gas at Ssekikubo supporters to disperse them from proceeding to Masaka Town. Photo by Dismus Buregyeya

"The prosecution did not append any copy before the court relating to his failure to respect court proceedings and bail terms, the charge sheet presented here does not bear any signature from a judicial authority, we lack clear facts that Ssekikubo absconded," he said.

He said the grounds raised by the prosecution in objection against the bail application filed by the Ssekikubo are not sufficient.

"The charges against Ssekikubo are not so grave to scare him into absconding. The accused is aware of the consequences," said Ssejjemba.

He also ruled that Ssekikubo does not have the capacity to pose a threat to anyone.  "The witnesses are big in numbers for Ssekikubo to pose a threat, I do not see it as an impediment to his bail application," he said.

Medard Ssegona the lead Counsel for Ssekikubo asked the state regarding statements and certified copies of the earlier proceeding under the cases filed against his clients.

He cited the criminal case No 37 of 2010 which was handled by the then Masaka Chief Magistrate, Sarah Mponye.

Ssekikubo who was arrested on Friday by Police for defying the Foot and Mouth Disease Quarantine appeared before the Masaka Chief Magistrates Court, Deo Ssejjemba amidst tight security.

The State led by Amina Akase stated that on August 2, 2010, during the electoral polls for the NRM party structures, Ssekikubo was in possession of a pistol without a valid certificate.

She said Ssekikubo threatened violence against Emmanuel Ssekimpi the former district Council Chairman for Ssembabule district.  Akase said during the same event Ssekikubo participated in a move calculated at causing death and injuries to voters who had convened for the party elections.

She said Ssekikubo participated in the damaging of NRM party electoral materials that included basins, boxes, pens and documents during the exercise.

Two cases of obstructing police officers on duty identified as  ASP Hit Kigenyi and the then-District Police Commander(DPC) Steven Okwir were among the offences read against Ssekikubo.

Akase had earlier told the court that Ssekikubo jumped bail affecting the conclusion of the case.

He said Ssekikubo had lined up sureties on August 4, 2020, and never appeared again until today.  She said the then court had granted cash bail of Sh200,000.

"History can repeat its self, this case would have been completed a long time ago if Ssekikubo had respected the bail application granted to him by then," she said.

She said being in possession of unlawful deadly weapons renders Ssekikubo dangerous.  She noted that state witnesses may face interference if Ssekikubo is granted bail.