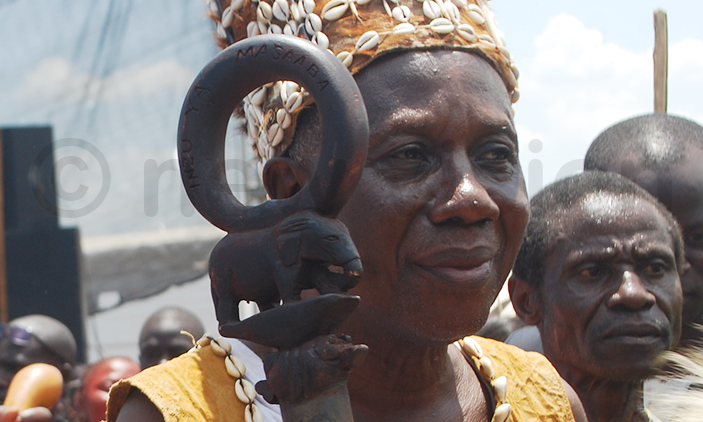 Bamasaba Cultural Institution leader, Bob Mushikori also noted that there was a population outburst among the Bamasaba and appealed to his subjects to take the President’s message seriously and avoid land fragmentation.
TOP Regional STORY
Thu Jan 09 2020 .
Museveni delivers pledge to Bamasaba

Bamasaba Cultural Institution leader, Bob Mushikori also noted that there was a population outburst among the Bamasaba and appealed to his subjects to take the President’s message seriously and avoid land fragmentation.

President Yoweri Museveni has delivered 200 head of cattle to Bamasaba Cultural Institution in a bid to pilot the 4-acre farming approach through the institution's clan structures.

The revelation was made by the institution leader, Bob Mushikori, in the end of year's press release to media briefings.

"We once again want to thank President Yoweri Museveni for giving us 200 cows to pilot the 4-acre farming approach through our clan structure, which will start soon," Mushikori said.

"I now call upon all the 26 clan chairmen to identify 10 willing and able members in each clan to benefit from the same, starting January 15," he added.

Mushikori noted that the President has for long preached the gospel of families settling on four acres of land to making good use of it by looking after animals by zero-grazing, planting grass to feed cattle, poultry and crop husbandry.

He said the President's message was aimed at making families avoid the tendencies of land fragmentation, which he says leads to soil infertility because of repeated cultivation.

Mushikori also noted that there was a population outburst among the Bamasaba and appealed to his subjects to take the President's message seriously and avoid land fragmentation.

"President Museveni has on several occasions advised Ugandans on how to get rich or make over sh40m per year using 4-acres of land, they thought it was impossible," he said.

Mushikori also called upon his subjects to stay united and work together as a community in order to benefit from government programmes.

"Please ignore negative elements that undermine government programmes and the unity of Bamasaba by blackmailing our cultural institution," Mushikori said.

He also said he was aware that the Bamasaba are getting set for cultural year "Imbalu", but they should stay calm as the clear road map by the cultural council is going to be communicated. He added that no unnecessary circumcision ceremonies are allowed until August.

"Our cherished culture is for unity and honour. We do not entertain activities that lead to domestic violence and child abuse," Mushikori added.

The Bamasaba Cultural Institution deputy prime minister, Mathias Nabutere called upon the 26 clans and chapters to complete the construction of their huts at Mutoto Cultural Ground in Bungokho.

"The cultural huts normally perform activities based on clan norms. The huts must be completed by April 30," he said.

"The purpose of our clan huts is to promote unity and display our heritage through food, drinks and artifacts. Recently, our cultural leader returned from a cultural visit in Wales and the Welsh are willing to support us with engineers that will design and build our Mutoto Cultural Centre," Nabutere said.

Nabutere revealed that the Welsh will start with documenting the history electronically through recording and storytelling. On completion of the cultural huts, the centre will start its activities.